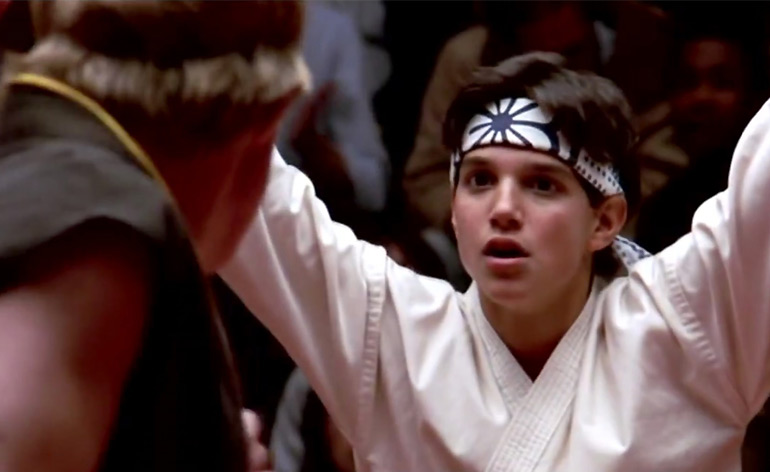 If you are looking for a classic coming of age tale wrapped in an action movie, you could do a lot worse than The Karate Kid.

Plot: A handyman/martial arts master agrees to teach a bullied boy karate and shows him that there is more to the martial art than fighting.

Review: Teenager Daniel Larusso (Ralph Macchio) and his mom move from their idyllic life in New Jersey, to a world full of rich kids, beach babes and blonde hair in Los Angeles. When Daniel starts to show an interest in cheerleader Ali (Elizabeth Shue), that does not sit well with her ex-boyfriend Johnny (William Zabka), who decides to beat on Daniel at every opportunity. Daniel has a tough time fighting back as Johnny and his crew are all members of the local karate dojo, the Cobra Kai, and thanks to their evil instructor John Kreese (Martin Cove), have not learned that karate is for self-defense and not for bullying. After witnessing and interrupting another beating at the hands of the Cobra Kai, building handyman Mr. Miyagi agrees to take Daniel to the Cobra Kai dojo to speak to Kreese and have his students leave Daniel alone. Unfortunately Kreese does not go for that, so Miyagi suggests that they meet Daniel at the All-Valley Karate Tournament, so they can compete on equal terms. With this, Daniel’s training with Mr. Miyagi begins…

The Karate Kid is one of those films that can never justify a negative review. It is a classic tale of the underdog fighting for both his and his girlfriend’s honor. Viewers know that Daniel will beat Johnny at the tournament, and that is not what is at the core of this movie. Ultimately it is a film about relationships; Daniel and Ali, Daniel and his mother, and Daniel with Miyagi. Mr Miyagi teaches Daniel that balance and honour within his spirit are for more important than being a destructive being who karate chops everything in his way.

It was released in 1984 and yes, the music and hairdos are all products of the era, but even with it’s cliches everything works. This was also the year that launched other pop-culture films such as Gremlins, Ghostbusters and Indian Jones and The Temple Of Doom and like these, The Karate Kid stands out as a movie for the ages. Directed by Academy Award winning John G. Avildsen (Best Director for Rocky), a man who knows a thing or two about how to weave a tale of a triumphant underdog, this movie works for action fans or family movie night.

Macchio’s portrayal of Daniel is spot on. He is somewhat gangly and awkward in almost everything he does which adds to the characters vulnerability. Shue is cute as his girlfriend and support system but ultimately this film is all about Pat Morita. He is more than just a wise karate master, his character shows strength and in a touching moment when drunkenly reminiscing about his late wife,  displays a lot of sadness and humanity.

If you are looking for a classic coming of age tale wrapped in an action movie, you could do a lot worse than The Karate Kid.