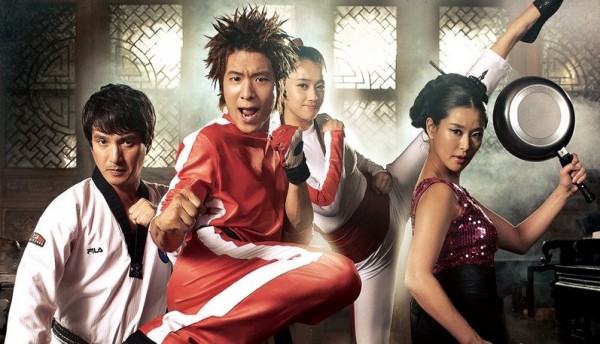 Despite the weak story, with a showcase of awesome spin-kicking talent and a genuine portrayal of a Taekwondo family, The Kick is a must-see for Taekwondo enthusiasts

Plot: After one son foils a criminal gang’s attempt to steal a priceless Thai artifact, his family becomes national heroes and the target of revenge. In order to protect his family from the gang, they are sent into hiding. But when the people he loves most are taken hostage, one son will stop at nothing to save his family and together they’ll take back what belongs to them.

Review: I really enjoyed watching the fight scenes in The Kick. As a Taekwondo athlete myself, I simply could not miss out on this film or even lose the opportunity to review it. The combination of the extraordinary skills of the K-Tigers demonstration team and the mind of the legendary Ong Bak and Tom Yum-Goong director-choreographer duo Prachya Pinkaew and Panna Rittkrai calls for action that is a mix of a LOT of kicks, tricks and hard hits, hence the title The Kick. The opening sequence is a series of Taekwondo competitions that calls forth the nostalgia of the old school Olympic Taekwondo days when fighters kicked with power and diversified their kicking arsenal. After that, the fists, I mean kicks, fly freely and abundantly every time a fight pursues. You are pretty much bound to see every kick in the Taekwondo kicktionary, from the basic roundhouse kick to the more advanced 540, 720, 900 1080 tornado and hook kicks. As equally entertaining as the fights are, however, I think I would have to hand the Fight of the Night award to the dance fight in the village. Fusing K-pop dancing with Taekwondo kicking, Na Tae-Joo as Taeyang is a living example that sometimes you can master more than one art. Plus, this fight scene has a nice K-pop song that makes this fight more lively, and even I wanted to take on K-pop dance classes after watching this.

The story of The Kick is pretty bland as with most Thai films. It is basically about a Taekwondo family who comes into conflict with a gang seeking revenge on them over an ancient blade the gang stole called “the Kris”, yet there is a significant portion of the film that deviated from that aspect such that it feels like the family is going on with their life as if there were no signs of threats in the first place. There are funny moments, but you would eventually treat them in a been-there-done-that kind of fashion. On the bright side though, if you wanna know how a real Taekwondo family is like, then this is the film for you. The father Master Mun is a former Taekwondo athlete-turned-family man who runs his family like the strict disciplinarian he is, and he dedicates his time in raising his children to become expert Taekwondo pratitioners themselves. The son Taeyang dreams of becoming an expert dancer, but often feels stuck in the shadows of his father, who pushes Taeyang to become an Olympic gold medalist and threatens to disown him if Taeyang does or suggests otherwise.

Despite the weak story, with a showcase of awesome spin-kicking talent and a genuine portrayal of a Taekwondo family, The Kick is a must-see for Taekwondo enthusiasts. Purchasing the DVD of The Kick is like purchasing a DVD of a live performance of an elite Taekwondo demonstration team, only to realize that you got way more than what you paid for.