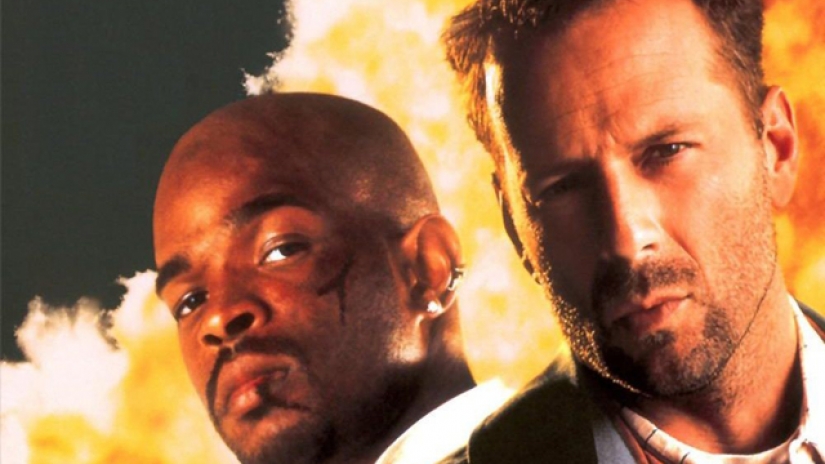 With 28 tracks and a running total of nearly 80 minutes of music, this album is a sure thing for soundtrack collectors and fans of Kamen or of the genre.

Soundtrack Review: Screenwriter Shane Black, director Tony Scott, star Bruce Willis, and producer Joel Silver met at the crossroads with The Last Boy Scout (1991), a nihilistic, hardcore action film that is really quite unlike any other action film of its era … or of any era. Willis plays an embittered ex-Secret Service agent named Joe Hallenbeck, who makes his bucks as a downtrodden private investigator. He lands a case that coincides with the death of a stripper who was having a relationship with an ex-NFL star named Jimmy Dix (Damon Wayons), a man almost as equally bitter about his dismissal from the big leagues as Hallenbeck is, and so they’re two guys with something in common. They find themselves in a major conspiracy over the forces at work that are trying to legalize sports gambling, and they get in over their heads when bullets start flying and bodies begin piling up, but working together they might stand a chance at the overwhelming odds against them.

Hired to compose the unusually subtle score to such a bombastic action film was the great Michael Kamen, who in 1991 alone had already composed a handful of memorable scores to film such as Hudson Hawk and Robin Hood: Prince of Thieves. Kamen – best known to fans of action movies – gave the Lethal Weapon and Die Hard franchises high notes of distinction with his pitch perfect music to those films, but his career was full of distinct and memorable compositions for all sorts of films.

His music for The Last Boy Scout has hints and moments that can be tied to his work in Lethal Weapon, Die Hard, and License to Kill, but it’s not a typically “big” score with grand, hard-hitting cues. The instrumentation is subtle and classy, with nods to the genre that screenwriter Shane Black was trying to emulate – the classic private eye niche that stemmed from the great pulp novels written by Raymond Chandler and Dashiell Hammett. When listening to this music, you can easily imagine wet, slicked city streets lit by stoplights and moonbeams while a bundled, over coated private eye is out combing the city for fresh leads on a cold case. That’s what this music sounds like: It’s even got a light French horn theme for Hallenbeck, and even that has a subdued texture. Kamen was great at all kinds of things with music, but creating a soundscape of the grimy, guilty, and dissolute sort was something he excelled at.

La La Land Records has just released the soundtrack to The Last Boy Scout on CD, and amazingly this is the first time this music has ever been officially released. With 28 tracks and a running total of nearly 80 minutes of music, this album is a sure thing for soundtrack collectors and fans of Kamen or of the genre. It hearkens back to the great era of the late 80’s and early 90’s when film music still meant something, and this music is a significant contribution to the annals of action movie scoring. It’s limited to 3000 units, so grab one while you still can.