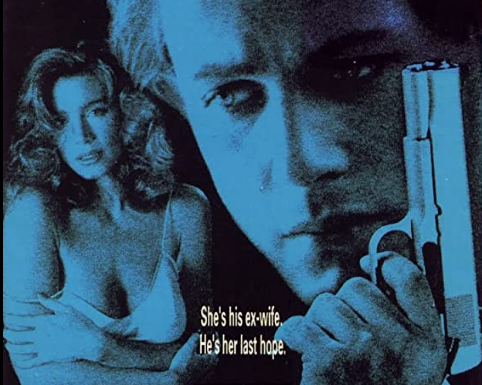 An awesome B-movie with heaps of action, gunfights and gratuitous nudity. Plus the always reliable Michael Pare gets to be tough and sarcastic while blowing away bad guys. What else could you ask for?

Plot: The beautiful Susan (the equally beautiful Shannon Tweed) is living an extravagant life with her wealthy husband Eric (Robert Pucci), a shady stockbroker, until some mobsters bust into their mansion and abduct her. Holding her hostage in a high-rise in downtown LA, the mobsters won’t release her until Eric squares his debt to them. Luckily, Susan’s ex-husband, renegade cop Jeff, (Pare) is still on the scene and reluctantly teams up with his ex’s new beau so they can rescue the damsel in distress and wipe out the bad guys.

Review: Concrete War, aka The Last Hour, was written off as a trashy Die Hard clone when it first debuted on VHS back in 1991, and that’s a shame – because this movie ROCKS! Sure it has all the usual genre trappings of a Die Hard wannabe – good guys fighting off villains in a still under construction high-rise – but this movie doesn’t take itself too seriously and it delivers the mayhem one would expect from a cheapie production like this, but that’s not to say the film isn’t well made.

William Sachs (who handled the reshoots on The Exterminator 2), does a fine job creating stylish gunfights and brutal kills. His framing and set up of shots is also quite interesting and gives the film a fresh look, setting it apart from countless other DTV shoot-em-ups! Shame he never went on to direct other B-movies like this, because the man has talent.

Pare is awesome as the lead, Jeff. Bringing his usual confident swagger and tough-guy demeanor, Pare is also bulky as hell and has a ton of great lines, most at the expense of co-star Pucci (who went on to write the underrated actioner The Corruptor), who gets the thankless job of playing straight guy to Pare’s hero. But Pucci’s Eric isn’t a total waste of time. Although he’s a dodgy stockbroker who’s betrayed the mob, Eric actually loves Susan, and wants the best for her. He’s even willing to risk his own life to get her back. What could have been a simple, one-note douchebag character is well played by the subtle Pucci, who garners our sympathy a few times.

Shannon Tweed gets the thankless role of Susan – the love interest to both our heroes. She looks great, and thanks to Tweed’s convincing performance, she never becomes annoying or distracting, although Jeff is such a great guy, one can only wonder why she left him in the first place.

The villains are all slimy mobsters, but one of them stands out – a scene stealing Danny Trejo, as Spider, the heartless thug who is more than happy to steal the goodies off his dead friends’ bodies after Jeff has dispatched them. What a guy!

The action of Concrete War is never able to match the spectacle of Die Hard, but what it lacks in scale, it makes up for in brutality. Gunshots are juicy and bloody (and practical given the movie’s limited budget) and the action scenes are crisp and sharp. Trejo’s death is particularly memorable, as is the final villain’s sudden exit, which left me wincing.

The only thing that really bugged me about this flick, was that the score is a blatant rip-off of Michael Kamen’s work from Lethal Weapon and Die Hard. And although this isn’t the movie’s fault (or the makers, for that matter), why the hell did the distributor change the name to The Last Hour? No one mentions anything about it, but the characters make plenty of references to sneaking around a big old building – that’s made of concrete. And Concrete War is a kick-ass name for a movie like this. The Last Hour makes the movie sound like a Frederic Forsythe spy thriller or something.

At any odds, Concrete War is a ton of fun, and Pare is awesome and playful as the hero. Like your B-actioners gritty and bloody? I highly recommend this fun movie!