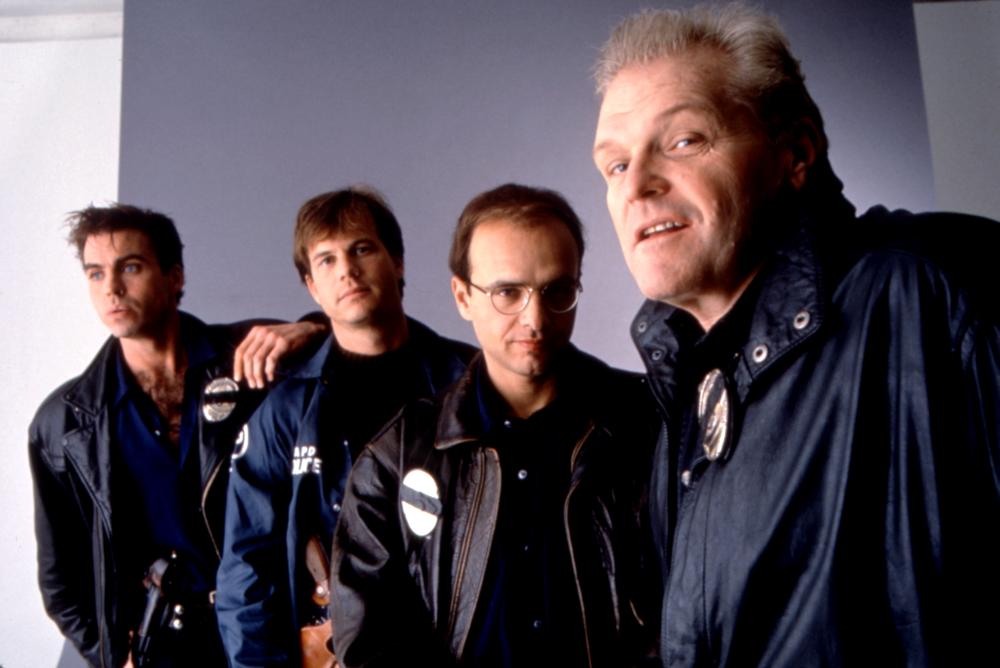 The Last of the Finest (1990) Kino Lorber Blu-ray Review

Director John Mackenzie did a solid job wrangling these actors and a more or less generic script, and he handled the action well.

Summary: An elite group of vice cops are fired from the L.A.P.D. for being over-zealous in their war against drugs. It is immediately apparent that some of their superiors are involved in the drug ring.

Review: There’re four good cops on the LAPD. These guys are “The Last of the Finest.” Frank Daley (Brian Dennehy) is the father figure and tip of the spear on his squad. His men are Wayne (Joe Pantoliano), Ricky (Jeff Fahey), and Hojo (Bill Paxton), and they’d die for Frank if they had to. Their latest investigation is a major drug running operation going on in L.A., and when they botch the sting with bad timing, their captain suspends all four of them for being reckless. On their own time, they dig even deeper on the insistence of Frank, who seems to know something much bigger than drugs is at stake, and after one of his good men is killed, the three remaining guys plunge head first into their off-the-clock investigation and unearth a conspiracy going on in the government. How are these three family men going to survive what they’ve dug up, and can Frank keep it all contained?

Remarkably similar to the film Sabotage, starring Arnold Schwarzenegger, The Last of the Finest is a hardboiled action film with a really good cast. It’s not a major budgeted Hollywood action film, the likes of which might have starred Bruce Willis or any number of contemporary movie stars of the era, but as a fairly low key genre film with dependable character actors like Dennehy, Paxton, Pantoliano, and Fahey in the cast the movie is much more likable and entertaining than it has any right to be. Director John Mackenzie did a solid job wrangling these actors and a more or less generic script, and he handled the action well.

Kino Lorber has just released The Last of the Finest onto DVD and Blu-ray, and the Blu-ray disc is the first time we’re seeing this film on high definition. The transfer looks as good as you’d hope it would, with clear, crisp imaging and sound. Also included on the disc is an audio commentary by film historian Nathanial Thompson and Steve Mitchell, who provide an informative behind the scenes look at the film.