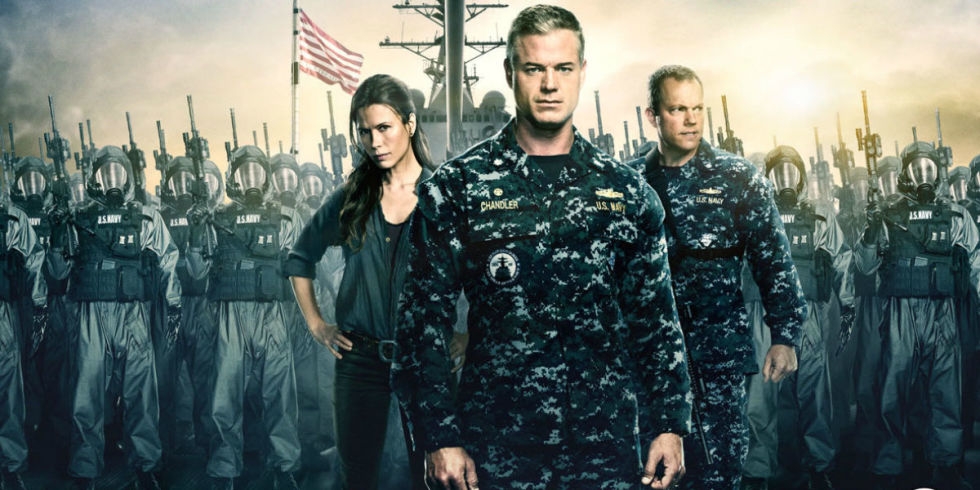 TNT should be saluted for conjuring up such an fun disaster-war drama!

Plot: This post-apocalyptic war drama chronicles the events aboard the USS Nathan James, a lone naval ship that must find a way to save humanity from extinction after a fatal virus decimates 80% of the world’s population. Commander

Season 1:
Tom Chandler (Eric Dane, Marley & Me) and his ship crew are joined by two virologists, Drs Rachel Scott (Rhona Mitra, Shooter) and Quincy Tophet (Sam Spruell, K-19: The Widowmaker), who have been tasked with the grave responsibility of collecting samples of the virus and developing a vaccine. After learning that the ship is the only safe haven from the deadly illness, the crew heads to the Guantanamo Bay Naval Base in order to collect food and supplies, but are forced to fight back against both escaped al-Qaeda prisoners and a pursuing Russian cruiser that continually attempts to steal the doctors’ research that’s essential to finding a cure.

Despite the novel for the source material dating back to 1988, the premise ends up feeling like a far more relevant and exciting disaster theme to tune into. Taking elements of other beloved blockbusters such as Crimson Tide, Outbreak, The Rock, Executive Decision, Olympus Has Fallen and even Under Siege, the thrills demands one’s attention, low-brow or not. Sharing some of the same political and spy elements of 24 and Last Resort, this show especially benefits from having Chandler go all Captain Kirk from Star Trek, by leaving the safety of the ship and making it a more personal mission fo the viewer to witness as opposed to view enclosed on only the ship itself.

The show makes time to also breathe in-between the seemingly endless double-crosses, mutinies and battles by at least making use of the character’s reluctant to trust not only their unlikely scientist but the fact that they might he able to escape back home, even though it is likely far from the America they initially shipped out from. While it might be strikingly similar to the other material I mentioned, it is only a blender of the best ingredients that one demands in a fictional action-sci-fi disaster-war drama. And this is the best tasting blend as far as I’m concerned as there’s a wonderful after-taste in store, especially near the end of this season.

Season 2:
The ship crew encounters both old and new obstacles in their plight to save humanity from the deadly virus that has already wiped out much of the world’s population. With newly sworn-in President Amy Granderson (Alfre Woodard, Star Trek: First Contact) and her soldiers having captured many of the crew members and taken control of the ship, Cmdr. Chandler and his remaining men find an unlikely ally in mysterious warlord Thorwald (Titus Welliver, Man on a Ledge) in their fight to stop the massacre of innocent people. It is discovered that remnants of other branches of the US Armed Forces still exist, and some characters embark on quests to locate their loved ones. The crew also faces off against a new enemy in the form of a group of people who have united over their common trait of immunity from the fatal disease who attempt to continue spreading the infection in order to rise to power. Meanwhile, Dr. Scott perseveres in her relentless mission to concoct a vaccination and spread it throughout the world.

The first half of the season is definitely in top gear as it shows how inevitably you just can’t trust political affiliates in even the more dire time of need and the additional supporting actors complement the material even more so by bringing to life these despicable fiends. The action never settles down and the casualty rate is shocking yet welcome as this show is another one not afraid to up the stakes.

Unfortunately, in the second portion where it gets started on the cult society that’s trying t form it’s own world domination via infection, while well-handled, it initially feels like it could’ve been in another season or show altogether and arguably doesn’t have as interesting a plot structure as the first portion of the season. Nevertheless, we are still treated to lovely Hunt for Red October-level fights so those alone give viewers the final reward they need to end the season.

Season 3:
Following the reconstruction of America in the five months after Dr. Scott developed and spread the cure across America, the government has started to rebuild. But as the nation starts to heal after the pandemic and the previous war, enemies both in China and the new White House threaten to disrupt that progress. CNO Chandler must forge new alliances with new allies while his enemies work to destroy him and use their power to oppress the people they should be helping.

This is a personal favorite season by far due to flushing out the old problems and starting over, only to conjure up new chaos to insert all the characters into. Having a bit of “East meets West” type allying where the US and Japan have to thwart a new crooked Chinese President together is only the icing on the cake. And the new White House backstabbing proves to be different enough and urgent that it’s welcome as opposed to being needlessly drawn out.

Every character in the show gets even more personal drama to deal with in addition to that but since this is a “plot-comes-first” type of show, the filmmakers wisely decide to have that personal stuff be background filler so that it doesn’t distract from the primary conflicts.

Season 4:
16 months after the constitutional crisis in America and Chandler resigned, the Red Flu has returned where it is now killing food and crops, slowly killing people off from starvation, hence this version is called the “Red Rust.” Once again the U.S. Navy must work to find a cure to this epidemic completely on their own with new and old allies. However, a mysterious party is also after the cure to the virus for nefarious purposes.

Dr. Vellek (Peter Weller, Robocop) makes for a more personal mad scientist type this season and allows for some psychological and scientific type battles instead of just more of the same gunfights and at-sea action. The filmmakers make good use of suspense to allow this season to stand out on its own feet, because being different is always better than being lesser. No one ever knows where each season is going at first but this show starts off more explosive and stats confined (no pun intended) in cat-and-mouse territory, before going back to the much beloved no-holds-barred fights near the end. It also helps that co-star Peter Weller gets to direct this season as well so that it definitely contains a consistent tone.

Season 5:
Three years after both pandemics are cured and the world governments are finally restored, the U.S. face a new threat. A Colombian revolutionary, Gustavo Barros (Maurice Compte, Breaking Bad), seizes power in South America and forms the Gran Colombian Empire to unite all of Latin America against the United States of America. This revolutionary coerces and threatens other countries to join him and launches a campaign to conquer Northern and Latin America and deals a devastating blow against the US Navy’s first functioning fleet. Despite this, the US manages to launch a counterattack and war drags on for months with neither side having a clear advantage. Which will win the day, Chandler and his allies or Gustavo and his followers?

This playful rehash of Homer’s The Odyssey proves to be a fitting finale for the show after a rather slow build-up. So much has changed in the last four years and this final season had to justify playing the same awesome record yet again. Inserting some allusions to what D-Day would look like in modern-day only helps with the show’s epic vibe. This season once again amps up the main character losses so that it reconfirms that this is the last voyage for good and none of the deaths feel forced or like last-minute considerations.

Going for less over-the-top moments and focusing more on just one main conflict proves to be a wise choice for this chaotic show. As a whole, one can only salute the film crew for planning out yet another five-year work of fiction that isn’t afraid to take risks and be its own level of excitement.