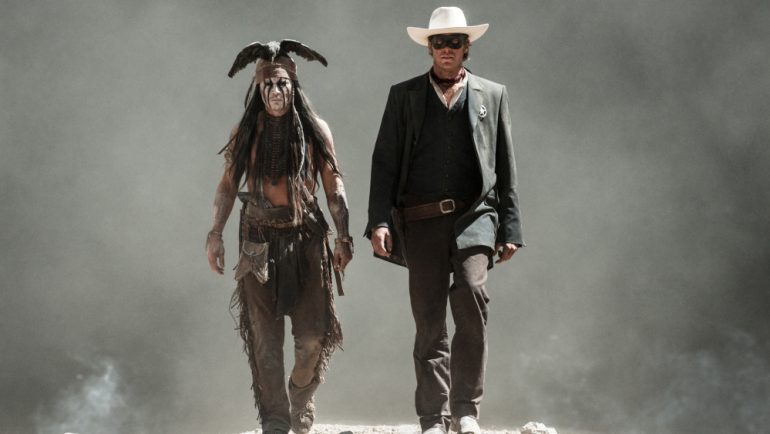 On the plus side Johnny Depp is very entertaining as Tonto and it’s not the “Pirates of the Wild West” that it looked like it would be in the trailers.

Plot: Native American warrior Tonto recounts the untold tales that transformed John Reid, a man of the law, into a legend of justice.

Review: Imagine, if you will, if the “Harry Potter” film series depicted it’s title character as having the courage of Ichabod Crane coupled with the combat prowess of Pee-Wee Herman. Whenever out hero encounters a minion of Lord Voldemort, or the Prince of Darkness himself, he provides as much of an obstacle to the villain’s plot as a chicken-wire fence would. Through each film in the series, Mr. Potter not only proves himself to be the most incompetent wizard to ever set foot in Hogwarts by far, but he makes no visible progression from his ineptitude until the last twenty minutes of the series, at which point he takes down the evildoers simply by deciding to man up and displays a level of skill with his wizard’s wand that Snape himself would be envious of. And throughout 95% of the series, Harry’s friends Hermione and Ron show themselves to be infinitely more adept and proficient in their wizarding ways than Harry, so much so that Harry does precisely nothing to provide even the most minor assistance to them and, in fact, actively hinders (not to mention thoroughly annoys) his friends in their struggle against Lord Voldemort. Now, replace “Harry Potter” and “Hermione and Ron” with “The Lone Ranger” and “Tonto”, and rejigger the contents of the above paragraph accordingly, and you have as accurate a synopsis of Disney’s “The Lone Ranger” as you will ever come across.

The film opens circa 1933, where a small child in a cowboy outfit is shocked, and likely permanently traumatized, when a Native American mannequin on display in a local fair inexplicably comes to life and recounts his adventures alongside “Kimosabe”. The film then shifts to 1869, when the paths of the Indian Tonto, played by Johnny Depp, and milksop attorney John Reid, played by Armie Hammer, first cross. John is deputized into a posse of lawmen under the leadership of his brother Dan, played by James Badge Dale, only for the entire posse to be massacred save for John by the vicious outlaw Butch Cavendish, played by William Fichtner. Tonto subsequently nurses John back to health, and the two ride off into the sunset to bring his brother’s killers to justice.

If that summary seems rushed, jumbled, incoherent, and lacking in any and all emotional impact, then I’ve successfully conveyed the experience of seeing “The Lone Ranger” for you in written form, thus saving you a trip to the movie theater. The film has had a long and arduous journey to the silver screen, with well-publicized filming setbacks and an increasingly out of control price tag that at one point saw the film being shut down all together. On top of that, the film has been at the mercy of the Shifting Release Date, which is always a wonderful omen for any film already experiencing production troubles. Watch the string of live-action Disney films over the past few years, and their agenda becomes very clear – Disney is hellbent on crafting the next “Pirates of the Carribean” if they have bankrupt themselves to do it. Unfortunately, the many setbacks of “The Lone Ranger” vividly manifest themselves within the finished product. The very best action sequence in the film is it’s first one involving a derailed train, and it’s actually good enough for the audience to get their hopes up for a good movie, which only makes the the failure of the film that much more pronounced. No movie can peak this early and keep it’s head above water, and certainly not if it’s as far over the two hour mark as “The Lone Ranger” is.

Not that the film’s troubled history is entirely to blame. The more you watch the trailers and tv spots for the film, the more you begin to notice a surprising lack of actual Lone Ranger footage or dialouge. Maybe that’s because the advertising executives at Disney were keenly aware of just how much the writers had mistaken the gimmick of “The Green Hornet” for “The Lone Ranger” – i.e. The Green Hornet himself does next to nothing at all, it’s Kato who’s the real star (even when he’s not being played by Bruce Lee.) But it’s no exaggeration to say that this version of the Lone Ranger is too afraid of his own shadow to supervise a game of musical chairs, much less lasso bank robbers and other assorted evildoers. In fact, this Lone Ranger actively aides his enemies through his own morbid incompetence, leaving the infinitely more badass Tonto to do all the heavy lifting, and it’s over two hours into the film before he even fires a bullet at one of the villains. Fifteen minutes of rewrites replacing all of the Lone Rangers pratfalls with acts of heroism, and the flaw at the very core of the film would have been removed. This is one problem that the filmmakers can’t scapegoat onto an out of control budget and indecisive release date.

Then again, maybe this is a script that should have gone back to the drawing board. Tonally, the film is all over the place. There are times where it seems to want to adapt the loosey goosey hijinks of Jack Sparrow into the wild west, and then there moments such as the murder of the title character’s brother by what can only be described as cannibalism, only for the film to stick a prosthetic leg with a built-in gun on Helena Bonham Carter’s character, followed a high stakes war between the white man and the Comanches. Either as a result of it’s production troubles or a shoddy script, the film doesn’t know what it wants to be, and as a result, it feels as unengaging and downright annoying as it’s title character.

If nothing else, the film isn’t the “Pirates of the Wild West” that I was expecting it to be. Johnny Depp makes for a pretty convincing Tonto, and actually goes out his way to give the character his own identity rather than being Jack Sparrow with a tomahawk. But it’s still one badass action hero constantly being held back a guy who should have the word “Dunce” on his cowboy hat. Between his utter uselessness and Tonto’s total command of everything from horseriding to surviving train wrecks, it’s a wonder that the film doesn’t bear his name instead. There’s nothing in the film to justify a theatrical viewing (although I won’t go as far as to say I regret seeing it – Helena Bonham Carter is pretty easy on the eyes in this thing, I’m not gonna lie.) As Disney continues on it’s quest to find the next “Pirates of the Carribean”, they can rest assured that it won’t come in the form of “The Lone Ranger