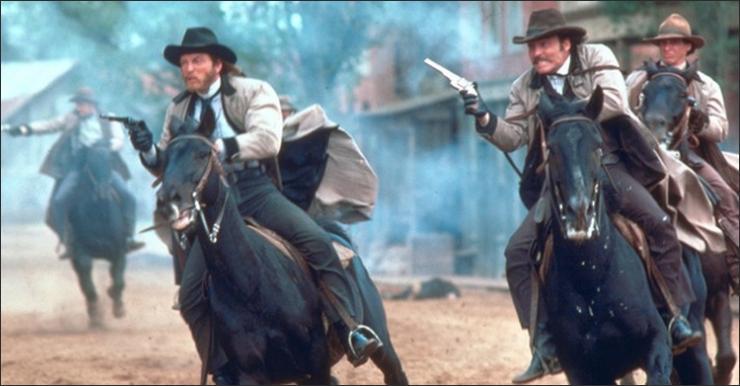 Gritty and down to earth, The Long Riders is one of Hill’s many solid westerns, but this one is more special than most because of the cast.

Synopsis: The origins, exploits and the ultimate fate of the Jesse James gang is told in a sympathetic portrayal of the bank robbers made up of brothers who begin their legendary bank raids because of revenge.

Review: Walter Hill’s The Long Riders starts with a bang: Jesse James and his brother Frank (played by James and Stacey Keach) are robbing a bank with their gang, which also includes the Younger Brothers – Cole, Jim, and Bob (played by David, Keith, and Robert Carradine) – and the Millers – Clell and Ed (played by Randy and Dennis Quaid). There’s a brief shootout and some innocent folks are killed, but The Long Riders (their overcoats are long) get away with the loot. They take a break for some romance and repeat the process from town to town, state to state. The Pinkertons are hired to hunt them down, and they make the mistake of killing innocent members of the James clan and the Younger clan, which doesn’t bode well for the Pinkertons. The Long Riders retaliate with a vengeance by murdering Pinkertons dead bang at close range, and get on with their robbing. They take trains too: They’re organized and efficient. But all good rides must end, and the Pinkertons stage a massive ambush that The Long Riders can’t escape, and after an incredibly bloody and violent shootout, the gang is decimated, but despite the bloodshed, most of them survive, but are caught, save Jesse and Frank who get away clean. Later, their story concludes in a poignant fashion that lives up to their legend.

Gritty and down to earth, The Long Riders is one of Hill’s many solid westerns, but this one is more special than most because of the casting. Four sets of siblings (including Nicholas and Christopher Guest as the Fords) fill out the roles they were all born to play. The casting gives the film real authenticity, and David Carradine and co-star Pamela Reed as the whore he can’t get away from are the standouts. The movie has a real sense of history text snapshot about it, despite the overly graphic violence.

Kino Lorber has just released a brand new 4K restoration blu ray of this title. It’s a two-disc set with the entire second disc devoted to newly produced extras. New interviews with six members of the cast are included, as well as a new interview with Hill and composer Ry Cooder. A 61-minute documentary entitled “Outlaw Brothers: The making of Long Riders” was produced for this release. An audio commentary and more features round out this outstanding release.