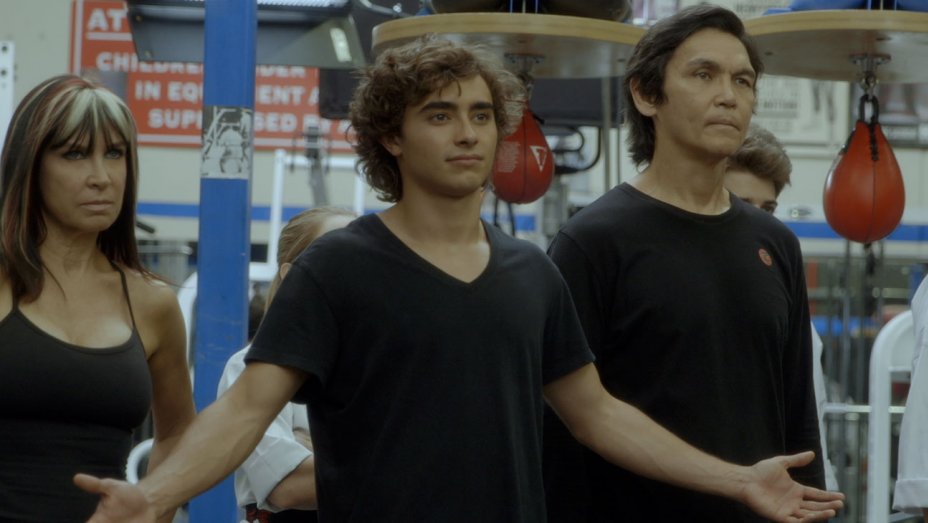 Nuanced, funny, and suitable for families who haven’t forsaken the prospect of watching something together that has some good, solid action in it, The Martial Arts Kid was a nice surprise, especially considering that its target demographic is the “PG” set.

Plot: A coming of age story about troubled Cleveland teen Robbie Oakes who moves to Cocoa Beach, Florida to live with his Aunt Cindy and Uncle Glen after getting arrested in Ohio. Upon his arrival, he meets a beautiful girl, Rina, whose boyfriend, Bo, has made it his personal mission to make Robbie’s life as difficult as possible. Now with something in his life to stand up for, Robbie soon finds himself learning martial arts from his Aunt and Uncle to protect himself and the people he cares about.

Review: Remember when Don “The Dragon” Wilson and Cynthia Rothrock were the king and queen of direct-to-video movies in the 1990’s? It got to the point where they would literally have a new release every few months, and at one point Don Wilson had upwards of five brand new titles in less than a year. Those were the glory days of martial arts action films, and the action movie market has quaked in their absence and in the drought since they were the reigning champs of the genre.

If you’ve followed these two stars, you’ll have seen that they’ve never completely gone away. They’ve remained busy, but not necessarily prolific, since coming into their seasoned years, and in fact Don Wilson has delivered the best performances of his film career in his latest pictures The Last Sentinel (2007), White Tiger (2015), and now with the family-friendly The Martial Arts Kid, which just had its premier at the Burbank Film Festival this past weekend. Wilson, who has long relied on his “World Kickboxing Champion” status to go above his name, no longer needs the moniker to herald his skills, because he’s finally come into his own as an actor and it’s more believable than ever when he throws his kicks and punches. He looks like he’s taken enough punishment as well, and so when he gets into a scrape on screen now that he’s in his 60’s it looks edgy and you can see that he’s still got it where it counts. He’s finally playing characters that are human, who have interesting arcs, and are relatable. With Rothrock, she’s always played more or less the same character, and no one has ever really allowed her to play mothers or anything beyond a woman out for justice or a cop, detective, or avenger of some kind, and so it’s wholly refreshing to see that in The Martial Arts Kid, both she and Wilson (who have appeared in three films together) play husband and wife, and they’re both given material that goes beyond the thankless kicking and punching stuff and gives them something tangible to work with.

The Martial Arts Kid – which in some small ways resembles the two Magic Kid movies with Don Wilson and Ted Jan Roberts – stars appealing young actor Jansen Panettiere as a troubled high school kid named Robbie, who as an orphan must go to live with his aunt Cindy (Rothrock) and uncle Glen (Wilson), a couple of interesting people that never had a chance to get to know Robbie until now. As it turns out, both Glen and Cindy run a martial arts studio and a restaurant on the beach, and they’ve clearly had some fieldwork as government employees, teaching astronauts about enduring pain. Whenever there’s trouble on the beach with bullies or hooligans, it’s Aunt Cindy who quells the issue with her signature scorpion kick, throat jabs or over-the-shoulder toss. Glen is a little more laid back, but he too gets into fisticuffs with the bad element if he happens upon a thug trying to ruffle the feathers of a shop keep, but Glen’s motto is “right makes might” and puts honor above muscle every time.

Attracted to their way of living, Robbie begins training with Glen and Cindy, and when he finds himself falling for a cute girl in class (played by Kathryn Newton), his advances are met with the utmost bullheadedness by her bully boyfriend, who is a disciple of the ruthless Coach Kaine (TJ Storm from The Ultimate Game), a practitioner of “extreme fighting” at a local dojo. With a bully making fists at Robbie, Glen and Cindy have to teach their nephew how to defend himself honorably before he’s crushed by the bully and his knuckle-dragging friends. The climax is a free-for-all fight with almost the entire cast, but it culminates in a nicely edited and balanced confrontation between Glen and Coach Kaine at a batting cage with baseballs being chucked at them at 55 miles per hour.

Nuanced, funny, and suitable for families who haven’t forsaken the prospect of watching something together that has some good, solid action in it, The Martial Arts Kid was a nice surprise, especially considering that its target demographic is the “PG” set. While the movie made me cringe a couple of times with awkward scripting that would be impossible to convey with acting from anyone with any amount of experience, I found the film to be perfectly palatable and digestible, and it superseded every expectation I had from it. Director and co-writer Michael Baumgarten pulled off a really entertaining family movie starring the best in the “B” business and gave everyone in the movie something they should be very proud of. Support the movie while it plays in theaters around the country, and then buy the DVD so that they can make the sequel, which is set up just before the end credits roll.

For more information on the Burbank Film Festival, visit: http://www.burbankfilmfest.org