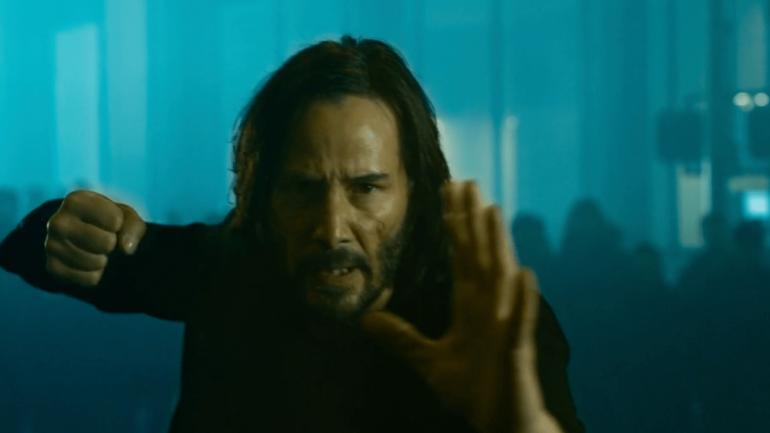 With Hollywood out of ideas, nostalgia is raging at the box office. Sometimes the outcome is great… other times we get The Matrix Resurrections…

Plot: Always sensing that something is wrong in the world around him, game developer Thomas Anderson (Reeves) is visited by some familiar faces, hell-bent on making him remember his time as Neo in The Matrix.

Review: The 1999 original Matrix was very clever, had some awesome action and was skilfully directed and realised. The performances were all spot on and the pacing and effects were outstanding, too. The 2003 sequel, Reloaded, was a bit scattered, but some excellent action sequences and a pumping score by Don Davis kept it afloat. The third film, Revolutions, was a conceptual mess that got bogged down in the mythos that the story had created and was an unsatisfactory ending for our beloved characters. Surely, The Matrix Resurrections can set some of this straight? No! In fact, I’d go on the record and say that this film is the worst of all of them.

What’s the problem? The screenplay and execution. Without her sister to co-direct and oversee the project, Lana Wachowski has crafted a dull, exposition-heavy snooze-fest that rivals the Star Wars prequel trilogy in the navel-gazing department. The story is so reliant on set-up and exposition that sometimes I felt like I was watching a documentary about the series rather than a new chapter. Maybe this was the creators’ intentions – given the fact how meta this film is because it makes Neo the creator of a video game called The Matrix! There’s a lot of talk in this picture about “going down the rabbit hole” once more. Well this film goes so far down said hole that when it comes back out, it’s been lobotomized!

Reeves is his usual, likeable self, and Carrie-Ann Moss is great as Trinity once more, but the supporting characters are deathly dull and add little to the story of the movie. My favourite character, Morpheus, has been recast with a different actor, and although his replacement (Yahya Adbul-Manteen II) is a great actor, this new version of Morpheus lacks the cool and grace that the brilliant Laurence Fishburne brought to the role. What a shame.

The series was always known for its eye-popping action and restrained, yet creative, camera work . This new film resorts to the Paul Greengrass method of shooting the carnage and that renders most of what occurs incomprehensible. What a waste that a once iconic film series like this has been homogenized and dwindled down to something as creatively bankrupt and bland as every other Hollywood action film of late.

Composer Don Davis, who worked on the original trilogy, didn’t return for this film, and that’s another big minus. His awesome score and beats have been replaced with a generic action score that would be more at home in a Jerry Bruckheimer film than a sci-fi epic like this. Series regular Cinematographer Bill Pope is absent also, and this big budget film suffers without his keen eye. In fact, I couldn’t help but notice how cheap and digital some of the scenes looked. It reminded me of George Lucas’s early use of the technology on his much maligned prequels.

Wanna watch a good Matrix film? Watch the original. Wanna see great action scenes? Watch the sequel. Want a resolution to these characters and their story? Watch the awful third film. But this mess… stay away. Overlong, clunky, and now as beige as every other big studio movie out there, it’s time this series was deleted.