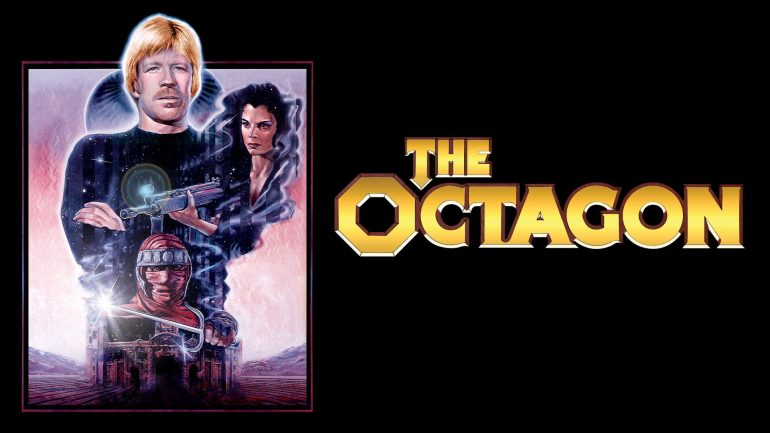 The Octagon is an entertaining Chuck Norris vehicle which has him romancing ladies and fighting ninjas. This new transfer from Kino is welcome but it’s too bad they didn’t bring all the special features over from the Scorpion release.

Plot: The heir to a ninja mantle falls to a Westerner, causing bad blood.

Review: A complicated plot and some voice-over work muddies the waters of this generally entertaining movie starring Chuck Norris. Norris plays Scott, an orphan whose master chose him over his treacherous brother Seikura (Tadashi Yamashita from American Ninja). Seikura has grown up to be a member of a terrorist group that trains people to be ninjas who will one day take over the world. Scott infiltrates the terrorist group (Richard Norton plays a thug in a few scenes) and there’s a final confrontation between the two sworn enemies/brothers.

Eric Karson directed this film, and it’s engaging to a point. Lee Van Cleef shows up in a few scenes to give Norris a few directives, and when Norris isn’t romancing the leading ladies, he’s fighting ninjas. Norris’s real-life son Mike plays a younger version of him in several scenes in this film. Karson also made Black Eagle with Sho Kosugi and Jean-Claude Van Damme and Angel Town with Olivier Gruner.

Previously released on Blu-ray from Scorpion (which is now out of print), Kino Lorber’s one-two-three punch Chuck Norris releases of The Octagon, A Force of One, and Good Guys Wear Black comes in a new 2K restoration, which is welcome, and ports over some of the special features (but not all) from that release onto this one. New features include a new commentary by Mike Leeder and Brandon Bentley, a making-of feature, trailers, TV spots, and radio spots. This one is for the collection, for certain.