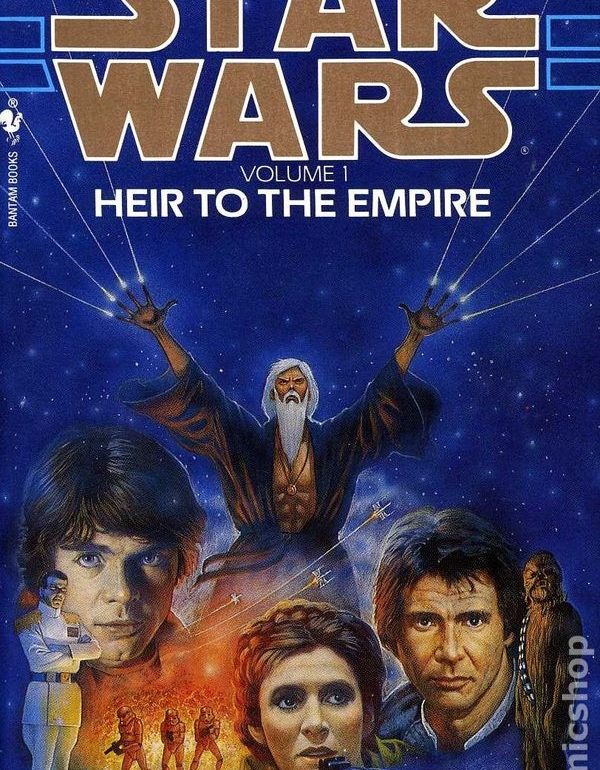 Star Wars - Hair to the Empire
0

The Other Episode VII – Star Wars: Heir to the Empire (1991) Review

A fun jaunt through the Star Wars universe of the original trilogy with intriguing new characters introduced, but the plot of the overall book feels a little aimless at times.

Plot: In the aftermath of Return of the Jedi, the Empire has crumbled and the “Rebellion” has morphed into a make-shift government dubbed the “New Republic”. Leia Organa Solo and Han are married and are expecting twins. Luke Skywaker is the first of hopefully many new Jedi Knights. Chewbacca, C3PO and R2D2 are still around as well. In the wake of the war that raged in episodes IV to VI, resources are strained with the loss of valuable ships on both sides. Enter Grand Admiral Thrawn, a strategic genius who patiently leads what’s left of the Empire through a multi-step plan to overtake the New Republic and rule the galaxy once more. Thrawn travels to the planet Myrkr and receives help from a smuggler named Talon Karrde, and his subordinate Mara Jade, in acquiring ysalamiri, little creatures that can thwart the force. Thrawn then travels to Mount Tantiss on the planet Wayland, an old storehouse used by the Emperor to keep his most secret weapons. There he employs the guardian of Mount Tantiss, a dangerously crazy old Jedi Master called Jorus C’baoth. Thrawn promises new Jedi for C’boath to train (mainly Luke, Leia and her twins) in exchange for C’boath enhancing the Empire’s attacks with the force. Most of the rest of the book is taken up by failed attempts to capture Luke and Leia by Thrawn’s forces of Noghri (alien assassins indebted to the Empire), a Bothan politician jockeying for position in the New Republic by discrediting Admiral Ackbar, and Luke teaming with smuggler Mara Jade who wants to kill Luke for interrupting her rise in the Empire during Return of the Jedi. It all culminates in a battle for a bunch of wayward Republic ships in which Han Solo and Wedge Antiles’ X-Wing Rouge Squadron defeat the Empire.

Review: After 9 years of being an entertainment juggernaut, public interest in Star Wars waned culminating in the cancellation of the Marvel comic, the Kenner toy line and even the Saturday morning Ewoks cartoon by 1986. The period between 1986 and 1991 was a barren wasteland for Star Wars merchandise until the release of Timothy Zahn’s book Heir to the Empire, billed as the official continuation of the franchise and promising to be the first in a trilogy of sequel books to Return of the Jedi showing the further adventures of Luke, Leia, Han and the gang. It quickly climbed to #1 on the New York Times Bestseller List and stayed on the charts for 19 weeks. I was about 14 at the time and still Star Wars crazy, so I eagerly took this book out of the library and devoured every page. And guess what? I was disappointed. Why were they still fighting the Empire? Why not a new threat? Why was everyone talking all the time? This is Star Wars! Where’s the action? And just what in hell was the story of all of this about? It looked like the structure of the story was that Thrawn was repeatedly trying to capture Luke and Leia and was constantly thwarted, Wile E. Coyote style, with a random battle at the end just to shoehorn in a climax to signal a proper “end” to the book. I had read Lord of the Rings prior to this and had never read any Star Wars novels previously, so reading a novelized Star Wars story was a shock to my senses.

Reading it now, I can admire the book a bit more and I can understand that the book medium obviously has to emphasizes sprawl over visual design, sound cues and long action sequences (all crucial to the Star Wars movies). On the plus side, Zahn introduced a number of interesting characters. Grand Admiral Thrawn is a different opponent for our heroes than that of the original movies, always thinking one step ahead of the heroes and being extremely patient about it. He comes across as a serious threat as the heroes are often clueless as to how to counter his plans. Talon Kardde is another dashing rouge in the vein of Lando and Han, only he seems more cultured than those two. Mara Jade has an interesting past as she was the secret right hand of the Emperor before Luke and Vader ended the Emperor’s reign. She’s also a user of the force. The Noghri are a neat addition to the universe with their creepy posture and assassin skills. A wookie named Ralrracheen makes an appearance while Leia and Chewie hide out on the Wookie planet Kshyyyk, a location that should be memorable but gets lost in the clutter of planet hopping. The old characters like Han, Luke, Leia, Chewie, R2, 3PO and even Lando are all written true to form and never stray from character. I had no problem hearing the original actors’ voices when the characters spoke. And having Leia train in the force and reach benchmarks in her training made her more interesting than in the original films.

The depiction of Jedi Knights and their role in society was fairly new when this book came out. I would argue we still didn’t get to see what exactly a Jedi Knight does in the prequel trilogy and Clone Wars TV series other than fight. Here, Luke adjudicates over a dispute between two cantina patrons arguing over money. He calmly hears each side and reaches a verdict that both parties agree with. I remember respecting this version of a Jedi Knight’s duties when I first read this as a teen, and it’s even more striking now after the bombardment of Clone Wars action we’ve received in the last decade.

On the downside: I’m still frustrated with the lack of focus with Noghri attacking all over the place and C’boath squabbling with Thrawn every so often with no real point or goal in sight for our heroes’ adventures. When Thrawn finally decides to highjack a bunch of transient warships at the end of the book resulting in a space battle between the Empire and Han and Wedge’s New Republic forces, the stakes seem meager and small scale. However, Kudos to Zahn for not trotting out a tired McGuffin device or Imperial “super weapon” for the heroes to stop like previous adventures and trying something new.

Star Wars: Heir to the Empire serves as an introductory chapter to the later books, showcasing new characters and old friends and getting readers prepared for new concepts like the ysalamiri. The characters are the strongest asset of this book, though the seemingly aimless nature of the adventures at this early point of the Thrawn trilogy keep the book from feeling like a strong Star Wars tale.

PS: Yes, I know you want to know the answer to the question: is it better than Force Awakens, the now “official” sequel to Return of the Jedi? Heir to the Empire certainly offers more ideas that shake up the Star Wars universe (C’boath and ysalamiri offer new avenues to explore in Star Wars, the Noghri make a fun new complement to the Stormtroopers), but Awakens cheats in offering focus through yet another “Deathstar”, for better or worse. For sheer pageantry, I give it to Force Awakens. For a fun jaunt through the Star Wars universe I’m familiar with that offers fun ideas to breathe new life into the franchise, I give it to Heir to the Empire.