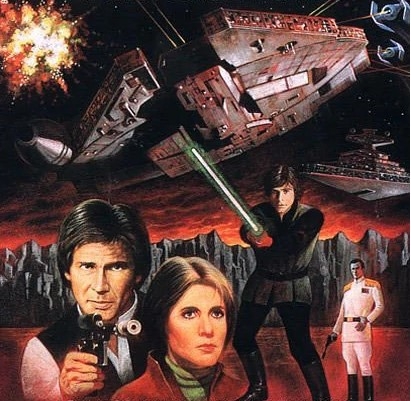 More quickly paced than its predecessor, but heavy on the political negotiations with a distinct lack of creatures and boisterous adventure that makes Star Wars what it is.

Plot: Before the Clone Wars, The Old Republic constructed a fleet of 200 “Dreadnaught” class ships (forerunners to the Destroyers) with the flagship being called the Katana, causing the fleet to be called the Katana Fleet. The fleet suffered a disease that drove the crew mad who “slaved” the controls of all ships in the fleet to the Katana and sent them into hyperspace, never to be heard from again. Talon Karrde happens upon the fleet in a lucky accident. When Thrawn captures an associate of Karrde’s who also knows where the fleet is, Thrawn uses the Emperor’s storehouse at Mount Tantiss to clone fresh new troopers to staff the fleet and sets out to find it. Meanwhile, Luke is summoned by Jorus C’boath to the planet Jomark where Luke trains under C’boath until Luke realizes that C’boath is dangerously mad. When Mara Jade also appears, Juke and Mara fight C’boath and escape. As well, Leia, Chewie and C3PO are summoned by the Noghri to their homeworld of Honoghr after they discover that Leia is a daughter of Vader whom they worship. After Leia realizes that Vader tricked the Noghri people into being indebted to the Empire whereby the Empire enslaved the Noghri people, Leia helps the Noghri by freeing them and rebuilding their world. Luke and Mara join Han and Lando to thwart the Empire’s attempt to take the Katana fleet in a huge space battle, but Thrawn succeeds in taking all but 15 of the Dreadnaughts and Mara Jade is knocked unconscious in a crash during battle.

Review: In Lucasfilm’s first attempt at reviving the Star Wars franchise in the early 90’s, they released a trilogy of sequel books penned by author Timothy Zahn depicting the further adventures of Luke and the gang after Return of the Jedi. Dark Force Rising was the second in the trilogy, following Heir to the Empire. With more of a focal point to most of the proceedings and adventures with their own lessons for Luke and Leia, Dark Force Rising is a big improvement over Heir to the Empire. Luke learns more about settling disputes among citizens from C’boath, who metes out his own harsh brand of justice. Leia comes to terms with her father’s legacy and sets it right with the downtrodden Noghri people, gaining important allies in the process. Mara Jade continues to debate whether to kill Luke Skywalker and it’s revealed that she is being influenced somehow by Palpatine through the force to kill Luke. A great new addition is Niles Ferrier, a “cigarra” smoking, ruthless smuggler who acquires information on the Katana fleet’s location. Niles is sort of the antithesis of the “dashing rouge” smuggler depicted in Han and Lando and he has a great “Star Warsy” partner in his “Wraith”, also known as the species “Defel”. Defels often appear to humans as living shadows and can appear in three dimensional form as black wolf-like creatures. The character is definitely more visual than the book can give credit for and was a very exciting addition to the Star Wars fold.

Out of all the characters, Han and Lando seem the most aimless in this book. They attempt to recruit former Republic Senator Garm Bel Iblis in the fight against the Empire, but Iblis refuses because of some past dispute with Mon Mothma. The politics of Star Wars was never its strongest asset and the boring political jockeying of characters like Admiral Ackbar and Mon Mothma often drag the book down.

As well, in the fray, we seem to have lost any creature battles that made the Star Wars movies interesting. Aside from sentient aliens, there aren’t any monsters that appear for our heroes to fight. In Heir to the Empire, Luke and Mara still had to fight giant beasts out in the jungle while running from the Empire. Here though, the emphasis is on Luke and Leia learning what kind of Jedi they want to be.

Thrawn and C’boath continue to squabble constantly, but the overall arc of acquiring the Katana fleet is a welcome focal point to the story. Dark Force Rising is a great read and more quickly paced and interesting than its predecessor.