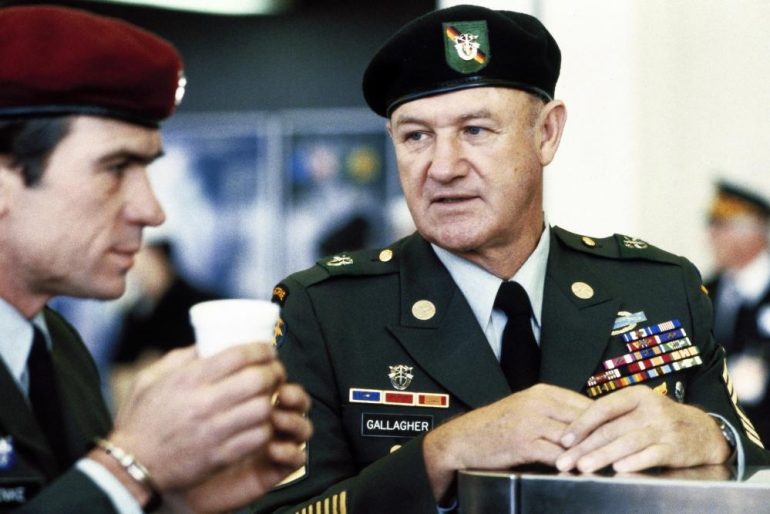 The Package has Gene Hackman and Tommy Lee Jones on entertaining form and despite not being packed with action it still makes for a riveting espionage thriller.

Plot: Johnny Gallagher, a sergeant, is sent from Germany with a prisoner. The prisoner escapes from the men’s room at National Airport and Hackman begins his search for his man. Enlisting the help of his ex-wife and various old friends, he finds that the prisoner is part of a plot by senior military personnel on both sides to kill a very high-ranking world figure in order to sabotage arms control talks.

Review: Here’s another one that went under the radar, but I quite enjoyed. I must warn though for anybody who thinks this is a straight up action film will be disappointed as this is more of an espionage thriller, but a solid one.

I always love seeing Gene Hackman on screen, and he proves yet again how much of a great actor he is in this film as Master Sergeant Johnny Gallagher. Another memorable performance is Tommy Lee Jones (back when he actually tried to act, unlike now except on occasion.)

The supporting cast is also solid which includes Joanna Cassidy, Dennis Franz (from NYPD Blue or Die Hard 2), John Heard and even Pam Grier (who worked with the director on Above the Law.)

While there’s not a lot of action, what is there is pretty decent, especially one shootout in the restaurant which was well done.

The story is interesting and well told; it is nicely directed by Andrew Davis, who gave us Above the Law, Code of Silence, Under Siege, The Fugitive, and Chain Reaction. Would love to see him come back and do one more film.

My only real problem is it does get slow in the middle at times, but that didn’t necessarily ruin it for me.

Overall, The Package is a an entertaining film with good performances, solid direction by Andrew Davis, has a good story, and for the most part moves at a good pace.