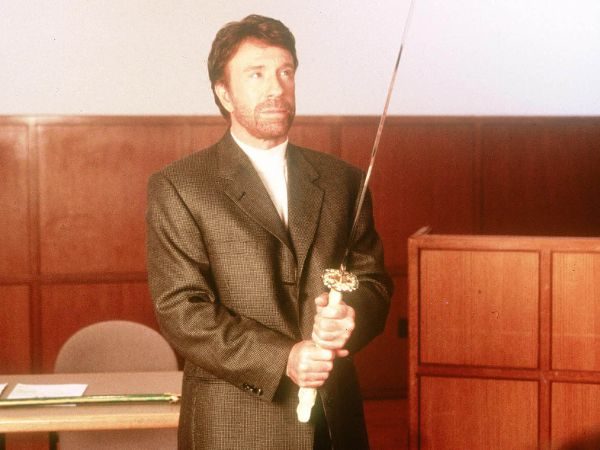 A truly awful and disappointing movie with Chuck Norris on auto pilot.

Plot: A U.S. president’s highly classified secret agent (Norris) and his team are assigned by the President to track down a terrorist who is suspected of planning to set off a nuclear device in the U.S.

Review: The first movie was reviewed by Eoin and he gave it one Star. I must say that I would probably give President’s Man I two stars, which doesn’t make it a good film, but it is entertaining in its own way. Here’s the link to Eoin’s Review: http://theactionelite.com/tae2018/movie-review/the-presidents-man-2000/

I liked the basic concept of the first one; hilarious but it had potential. It seems that the first one was a ratings success because soon after the end of the Walker show they started with the production of the second.

To be honest, this is far worse than the first one and I didn’t think that was possible! It was planned that the movie would be released in 2001, but after the attacks on 9/11 and with all the similarities in the movie it was postponed. It is perfectly understandable, because the main villain is shaped pretty obviously after Osama Bin Laden and the whole Taliban thing is very prominent in the movie.

I don’t know why, maybe because it was the first movie after the end of the Walker TV Show or he had some personal issues, but I never saw Mr. Norris that unmotivated.
He basically had one facial expression the whole movie; it looked like he sometimes missed his turn when he was supposed to say something; he is also doubled in more action scenes in this than in any other movie I can remember.

What I absolute hate about the movie is that they recast the protégé of Chuck.  In the first one the character is played by Dylan Neal (and I liked his intensity).
In this one he is played by Judson Mills (who was in more than 50 episodes of Walker and was kind of a project by the Norris brothers). Another actor in the same role happens quite often, but they changed the whole personality of the character. Only the name is the same. On a positive side you get the late, great Robert Urich as the president of the United States.

There are lots of hilarious scenes in the movie, like the one man infiltration of a terrorist camp or all of the other covert operations, because Chuck and his buddy are extremely noisy or Chuck can disarm an atomic bomb without problems and so on. But the single most hilarious and awesome sequence of the whole movie is this one: every agency in the United States can’t detect the secret message of the terrorist leader in a video, only our famous hero can do that in a matter of seconds after he watches it. Bam! Sounds like one of the Chuck Norris facts before they even existed.

The production levels were still low, with a lot of stock footage and you don’t believe for a second that they shot the movie anywhere else than in the US.
It was a problem however, when parts should be in South and North Africa but clearly aren’t.  Another great thing was they simply took an explosion out of the first one!

The movie was produced by Aaron and Chuck Norris. The director was his Son Eric who did the stunt work on the first movie. He has a hand for action scenes, but is not really a good story teller.
The action is OK for a TV Movie, but all of that Hong Kong stuff doesn’t fit Chuck or in the context of the movie. The biggest problem is the heavy use of doubles and that it is pretty obvious, especially in the end fight. The stuntmen were poorly cast as they didn’t look like the actors and there is some bad camerawork too.

The music is not as cheesy as in the first one which was a real a letdown!

Overall, a truly awful and disappointing movie with Chuck Norris on auto pilot.