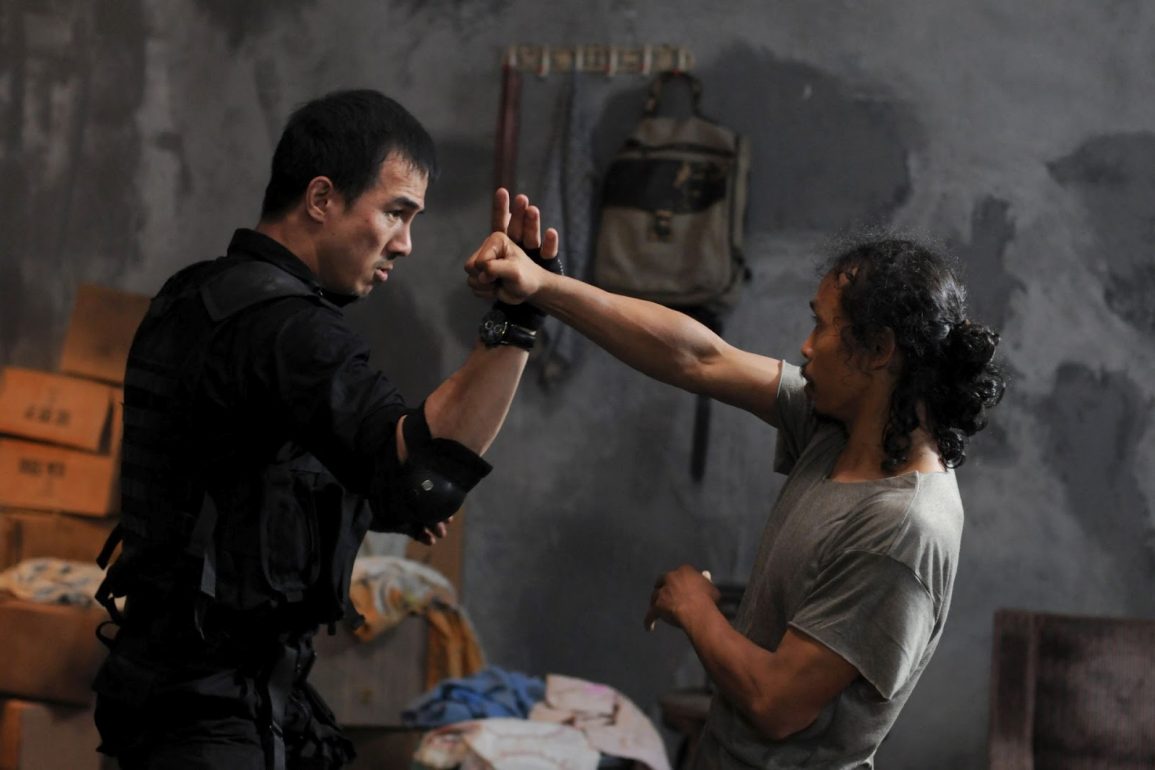 It may not have much in the way of plot or characters but what The Raid does have are some of the best fight scenes you’ll ever see.

Plot:A rookie member of an elite team of commandos, Rama (Iko Uwais) is instructed to hang back while his comrades-in-arms go ahead with their mission to take down a brutal crime lord called Tama (Ray Sahetapy). However, the team’s cover is blown, and Tama offers sanctuary to every criminal in his high-rise apartment block in exchange for the cops’ heads. Now Rama must take command and lead his remaining team on an ultraviolent charge through the building to complete — and survive — the mission.
Review: Is The Raid the new Die Hard? No. Far from it. Is it a kick-ass, highly enjoyable thrill-ride? Hell yes, and that’s all we’re really looking for.

The premise is simple, 20 cops have to climb 15 floors to take down 1 boss. It’s pretty much a video-game plot but that’s not a bad thing, because the plot is kept simple we don’t have to waste any time thinking about the storyline or how A is related to B but not C with a fleeting mention of D. There are a few twists and turns in the story, some you see coming, a couple of pleasant surprises but it all works out in the end.

The acting’s nothing special but then again it doesn’t have to be, the main actors end up being the only people on-screen long enough to remember their names and faces. It’s all kept simple, the heroes are heroic, the villains are villainous, you can pretty much tell who’s going to live and who’s going to die right off the bat with only a couple of surprises.

But what makes this film truly brilliant is the direction and the combat; the film is brilliantly directed, fast, energetic, lots of quick cuts and fast-paced action. There are a few parts that use shaky-cam but it’s used to great effect for the film; at one point the camera is moving around like a squirrel on crack as all around the characters guns are going off but as the mayhem dies the down the camera slows down, it’s an effective way to use the much-hated gimmick.

However, along with the quick action there are a couple of brilliant slow-mo parts and extremely tense moments. One early scene has the whole complex bathed in darkness as the cops slowly open a door. Too late one of them realizes it’s a trap only to have one of the others fire a shotgun, lighting up their location and showing the bad guys where to shoot. Another truly breath-holding part comes later on when the main character and a fellow officer are hiding in a wall and one of the villains – Machete Man – is stabbing the wall, just before he stops he slices the main characters face and he has to remove the blood stain from the machete before the weapon is removed.

The combat is also fantastic; it starts with a lot of gun-fights which are all pretty good but nothing you haven’t seen. But when those bullets run out this turns into an entirely different beast. The hand-to-hand is some of the best, if not the best, I’ve ever seen; you can see, hear and feel every punch, kick, stab and slice that occurs in the film. It’s absolutely brutal and fantastic to watch. The fight with Mad-Dog is a high-light of the film and a highlight scene of the year.

The score is one of the best I’ve ever heard; it’s technical, electrical, pulse-pounding, adrenaline-pumping where you get really stuck into the action listening to each track sell the scene. If nothing else you HAVE to listen to this soundtrack.