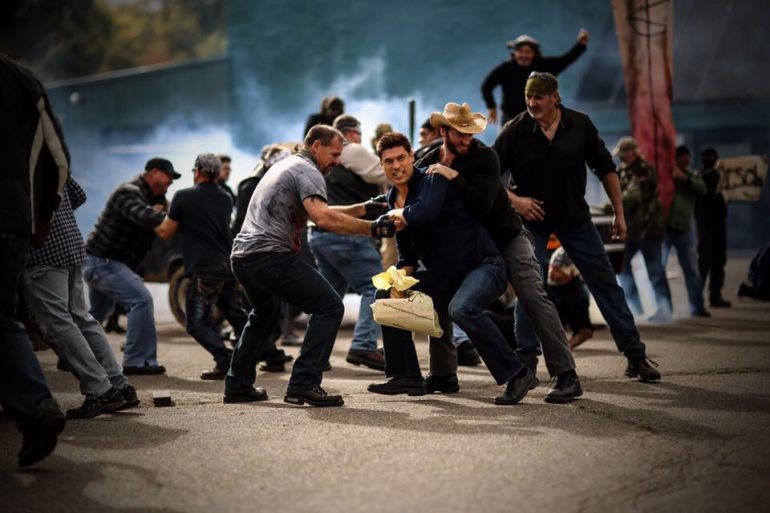 Another not well-structured dramatic story which is further ridden with poor build-up and uninvolving characters.

Plot: After a trip to the store ends in riots and chaos, Rick (Kevin Sorbo, Andromeda) rushes home desperate to gather his family and find safety. His plans are dashed when the very same armed men suddenly appear, led by the ruthless Jack (Brian Bosworth, Stone Cold). Caught in the deadly crossfire, the children are forced to seek shelter in the surrounding woods where their faith and family bonds are pushed to the limit, especially those of the eldest daughter, Sophie (Mollee Gray). It’s now up to the children to reclaim their home, find their parents and put an end to Jack’s rampage!
Review: Dubbed by peers as an anti-gun control film, resembling Red Dawn in style and quoted by its lead star Sorbo as a movie about a family of faith who also uses guns (but not a 2nd Amendment film), this is one unusual Christian Action film in quite sometime. Regardless of wether a film succeeds at what it’s preaching, in the end it’s about if there are any decent talking points or entertainment to speak of. Red Dawn for instance while politically dividing its post-Cold War era audience at the time was entertaining based on wether or not the audience bought into the invasion gimmick it displayed (or just said “Screw it!” and turned their brain off). In recent years, similarly successful Action film franchises like The Purge and Olympus Has Fallen emerged to much of the same sort of popularity, infamy and cult fanbases. An invasion of any kind has always interested audiences wether it be about politics, aliens, foreign spy intrigue or something else morbidly fascinating yet unimaginable.
Much like wether a film doesn’t have to succeed in all areas to entertain, a movie that’s dubbed as propaganda or biased in any way can also still be entertaining. Casablanca is considered one of the greatest films of all time despite several pro-WWII portions and Top Gun has often been cited as a U.S. Navy recruitment ad once one strips away the main action-romance plot. And in recent years, pop culture-savvy audiences have shown that they’re willing to do an annual celebration of lesser quality movies, wether it be something like The Rocky Horror Picture Show, The Room or even Samurai Cop. This is an Action movie site so at the end of the day, I was hoping to enjoy something exciting, regardless of its critical reputation or controversial topics. So did it succeed at ANYTHING?Well, long story short: yes and no. The camerawork had lots of engaging tracking shots at the beginning and the music wasn’t overdramatic.
I always found both Sorbo and Bosworth to be reasonable actors in Action genre material but Sorbo seemed unengaged with the material and Bosworth was too busy chewing scenery instead of creating much of a character. The film didn’t force anything on you and was consistent in tone, let alone left the whole riots and government disputes to the imagination while still never giving enough detail to feel fully believable. The film mainly focused on faith, morals and beliefs which keep everyone standing up straight every day and every minute- especially when confronted by hostile groups of people. So what was missing then? Any reason to care at any point in the story.The film also kept plodding along yet the story kept being barely existing until it literally transformed into an excuse to put kids fighting Bosworth and his gang in different houses and forest ridden areas, and then stretching that for the remaining chunk that was this sorry exercise of a movie. And like other Christian Action films, this too felt the need to hint at brutal violence before then shying away and then resorting to characters hugging each other, telling each other to have faith and forgive someone who’s just about to kill them and their siblings. I’m sorry guys but that doesn’t happen on any planet. If someone’s attacking you, the reasons don’t matter and you either knock them out or kill them in self-defense. Why must we be subjected to such childish nonsense?

This film proves more lively than other Bible Channel original movies (i.e. The Omega Code) but despite looking like every other mid-budget indie or TV film of the week, it eventually squanders any reason to captivate or involve by letting the narrative sizzle out and relying on the actors (and its very audience that sees anything Christian movie related) to engage the viewer. Because Sorbo mumbles or forcibly shouts his dialogue (I know he can do better than that- anyone who’s seen Hercules knows he can do better!) to where his character never becomes much of anything. Eric Roberts also appears briefly as a store manager and makes no difference in the quality or flow of the film while spouting out dire dialogue. Bosworth is the main actor for the rest of the film given his twisted motivation (whatever the hell that was) for hunting down the kids the rest of the film. The film is further hurt by dark lighting that makes it impossible to make out who’s fighting who or even care. And why anyone would want to get ancient weapons to fight mens with guns, especially in this day and age is anyone’s guess but why waste brainpower on something so petulant? I guess the samurai sword one of them was using was cool…

This film is available to rent on Amazon Prime and the standard and high definition formats make no difference given how the film eventually eclipses its audience in darkly-lit areas to where you’ll still have to strain your eyes just to see anything worth seeing. Speaking of which, this isn’t worth seeing. At all.