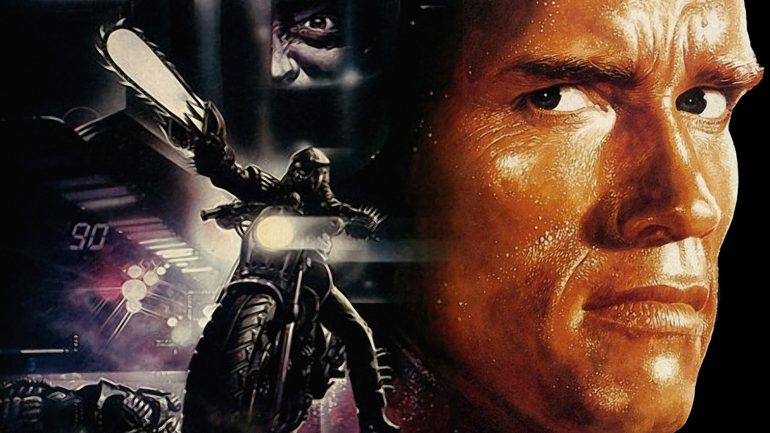 I have a confession to make – I’m a big, big, BIG Stephen King fan. I have all of his novels, almost all in hardcover. I also have almost all of the movie adaptations of his work on DVD or Blu-Ray (I skipped the terrible 2nd Salem’s Lot adaptation, but I have the first one by Tobe Hooper). The two main topics of discussion that always comes up when a story is adapted to the big screen is, a) how close is the movie to the source material and b) which one is better? By comparing the two today, I’m hoping to give you some insight to make your choice.

Let’s start with the book. Set in 2025, Ben Richards tries out for the Gaming Network to earn some money for his impoverished family. Going through a series of tests, Richards is selected for the television series, the Running Man. On the run across America, chased by an elite killing team named the Hunters and forced to send in videotapes cataloging his experience on the run, Richards heads to New York and then Boston, before heading into familiar King territory in Derry, Maine.
Richards eventually takes control his destiny, defeating the head Hunter, Evan McCone, and flies a plane into the Games Network, effectively destroying the organization’s grip on society.

Now, let’s look at the movie. The protagonist’s name is still Ben Richards (though Arnold Schwarzenegger is a far more impressive physical specimen than the scrawny Richards from the book), he’s a police helicopter pilot who is framed for a massacre and forced to serve in a labor camp. Breaking free with two friends, Richards kidnaps Amber and attempts to flee to Hawaii, only to be captured and forced to be a contestant in the Running Man, along with Amber and his two buddies who escaped the labor camp. Fighting a whole host of colourful characters, Richards and Amber eventually escape the game and confront Killian, the devious host of the Running Man.

So how close is the movie to the book? Some would say not very — the movie has a love interest for the main character that the book does not, the world of the movie is much more colourful and over the top, whereas the book is very gritty and dreary, with the Games Network building standing as a sleek monument in the midst of Co-op City’s impoverished slums. The Richards character in the book is basically alone, though he does meet a guy who helps him during his run, while in the movie, Richards has Amber, Laughlin and Weiss by his side. The movie also has more of an organized resistance to the Games Network, whereas the book shows that everyone is pretty much out for themselves. However, the core of the story is still there, with Richards fighting against the Gaming Network and being forced to run for his life from men intending to kill him.

So, which version is better? I would have to say on this one, that both stories have their merits. I enjoy the book for the grim realism that sees one man able to make a difference, despite the overwhelming odds that he faces. The book’s Richards is a cynic who is not trying to make some over-riding grand gesture, but simply playing the game in order to survive. It is only when he begins to understand the magnitude of the Games Network’s grip on society that he becomes more idealistic and altruistic in his actions, which is a nice change from being a good guy for the sake of being a good guy. At the same time, the movie’s 80’s flair cannot be ignored and I like the idea that the Stalkers are all unique and memorable in both their appearance and tactics. Schwarzenegger is always watchable as the lead character (for people who scoff at his acting ability, remember one of the greatest movie stars of all time, John Wayne, only really played one role – but he did it, really, really well) and the pace is quick and engaging. Richard Dawson shines as the slimy Killian who you can’t wait to see get his comeuppance. At the same time, there is enough of the book’s core in place for it to still be recognizable in the movie, which is pleasing to fans of the story. People always seem to think that the only good adaptations are ones that strictly follow the plot of the source material – I would submit that instead, the most successful adaptations are the ones where the spirit of the source material is recognizable, while still standing out as it’s own unique telling of the story.