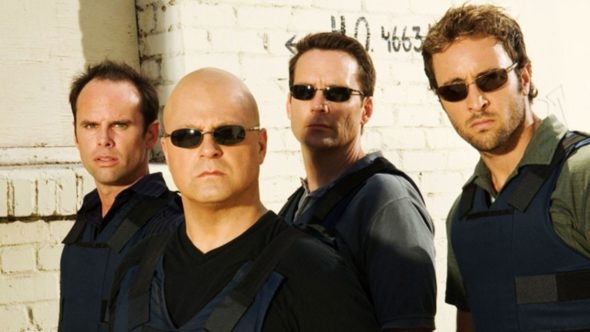 Another pre-streaming age show that still merits being rewatched every other year due to its top-rate thrills and outrageous over-the-top moments. Without this show, Chicago PD, Justified and Breaking Bad would definitely have never existed. The show can still be viewed on streaming platforms like Crackle, Amazon Prime and Hulu.

They operate out of an LAPD-converted church, known as “the Barn,” while working yet struggling to maintain the peace in the district and reduce crime rates.

The Emmy and Golden Globe-winning first season deals with Mackey and the other Strike Team members covering up their shooting of a planted officer on their team placed by Capt. David Aceveda (Benito Martinez, Outbreak) and the Department of Justice who have been suspicious of their activities.

This first season is off to a grand start with its jaw-dropping handheld camerawork that puts you in the middle of the street chasing action and when accompanied by solid veteran and then-unknown character actors, cool subtexted dialogue and docudrama feel, make your head almost explode from the sheer adrenaline rush of it all. It feels like it ups the no-holds-barred level previously accomplished by other hardhitting crime dramas like The Sopranos, NYPD Blue and the Law & Order franchise, while making for a worthy rival to HBO’s The Wire which premiered around the same time.

The first half of the season deals with a new drug threat from Armadillo (Danny Pino), a highly intelligent immigrant that has coerced the black and Hispanic gangs to work together, making it difficult for the Strike Team to charge him. The second half of the season deals with the Strike Team’s discovery of the Armenian “money train” used to ship laundered money out of the US. Struggling familyman Mackey and the Strike Team decide to hijack the shipment which would allow them to smuggle away millions of dollars for themselves.

This season successfully one-ups the previous season while perfectly complimenting everything that came before. Too many shows often fall victim to being too repetitive or wanting to keep forcing changes but this season is so firm and thrilling that you can tell it was all well-outlined.

Dealing with fallout from the Season 2 money train robbery, Mackey learns that a portion of the money was marked by the Treasury Department, and the Strike Team figures out ways to diverting any federal attention to their activities. However, the tension of having the illegal money gets to Lemansky, and in an off-the-cuff discussion, he burns most of the money before the others can stop him.

What sounds like more of an optional Afterword to any literary work, this season is hardly an afterthought in execution. We all keep coming back to good shows due to liking neat character-driven drama and this season reminds us that the characters are still human, flawed as they are, and are about to be on the breaking point of both their careers and existence.

The Strike Team becomes involved with the affairs of Antwon Mitchell (Anthony Anderson, Life), a highly respected drug lord who ends up blackmailing Shane to coerce his help. Mackey, with the help of new Barn Captain, Monica Rawling (Glenn Close, The Big Chill), attempts to help Shane out of his situation, reunite the Strike Team, and eventually ends up with sufficient evidence to send Mitchell to jail.

The show is still beyond relevant here by showing that the creators are beyond just showing more police raids, perverted crimes and lawbreaking. Now, the focus has totally shifted to seeing how stickier all the situations have become for all involved. It is also helped by showing how all the team members are double-guessing each other and once again foreshadows more explosive mayhem to come.

Internal Affairs opens an LAPD investigation led by Lt. Jon Kavanaugh (Forest Whitaker, Platoon) on Lemansky, purportedly for not reporting a stash of drugs he had taken, but in actuality to find evidence of the Strike Team’s countless misdeeds. Vic learns of Kavanaugh’s true intent, and tries to humiliate Kavanaugh to show the investigation is actually personal.

Much like Season 4, the show is all about showing its viewers that any work is five times better when you got all your cards to play and great actors to guest star. Viewers for this show will either be on Vic or the Law’s side and matters are helped since, from the very beginning, the creator have never told the viewer which side to root for, making the insane chaos even more enjoyable to witness.

The Strike Team struggles with a key member’s death, and suspect one of the LA gangs committed it, but Shane is the true one with skeletons in his closet. Kavanaugh continues his investigation outside of IA, eventually forced to admit that he’s deliberately planting evidence. Mackey learns he is being forced into early retirement and tries to fight back by proving his value. Tensions on the Strike Team lead Shane to turn to the Armenian mob for protection, only to expose the Team’s role in the previous money-train heist, putting all of their families at risk.

The show is truly showing everyone dancing with the Devil at this point, and brings up more great (if endless) discussion points on trust, role models and the art of deception. Gone by this point are the “ends justify the means” counterpoints and instead enters the whole “run for your life” tactic instead.

Vic and mayoral candidate Aceveda discover the Mexican cartel, headed by Beltran (Francesco Quinn, 24), is looking to influence the LAPD’s Farmington district, and they work with ICE agents to take them down. The Barn later gains significant evidence that they plan to later use to arrest all of the Strike Team members. Shane attempts to kill Mackey, but it goes awry, making him and his family a fugitive of the law.

The final season shows that hypocrisy-fueled revenge is still not out of the question here on thus show, especially if it’s a personal score. Some critics and fans were not impressed with the ending of this show but I feel like it ended up being a cool reflection on all the themes, characters and shocking plot twists that were encountered throughout the years, and the show, while always well neutered and mature, gives you the feeling that you’ve just seen an incredible crime story unfold in front of your eyes, so incredible you never want to blink or look away.

Another pre-streaming age show that still merits being rewatched every other year due to its top-rate thrills and outrageous over-the-top moments. Without this show, Chicago PD, Justified and Breaking Bad would definitely have never existed. The show can still be viewed on streaming platforms like Crackle, Amazon Prime and Hulu.