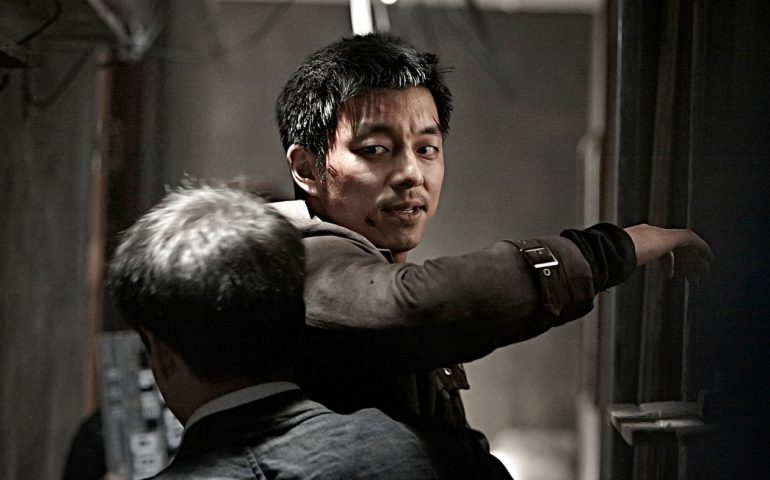 Plot: Ji Dong-cheol (Gong Yoo) is the best field agent in North Korea – until he is abandoned during a mission, his wife and daughter murdered. Hunted and on the run, torn between grief and vengeance, he takes a job as a night driver for the CEO of a powerful corporation. The chairman is brutally assassinated – but gives Dong-cheol a pair of glasses before he dies. Now, he’s on the run again. Accused of murder, wanted for treason, and desperate to uncover the volatile national secrets hidden inside the glasses. Dong-cheol wants the truth. And he’ll start a war to get it.

Review: The Suspect is a South Korean action/thriller with a bit of a ‘Bourne’ vibe to it. Not so much in the story but in the style of shooting. Full of fantastic car chases, roof top action and hand to hand combat, this movie looks the part of a Hollywood blockbuster. Clocking in at two hours and seventeen minutes, it is not a short film but it has enough of a story to keep our interest throughout.

Gong Yoo plays Cheol’s character as a stoic noble man. Not all that expressive but considering what he has been through, I doubt I would be all that cheery in a similar situation. Choi Kyeong-hee (Yoo Da-in), is a reporter who is trying to find a story that will thrust her into the world of mainstream news. She becomes an important ally with Ji and plays a welcome sidekick. She is tough, smart and more than willing to get in on the action when push comes to shove.

The real star of this film is Colonel Min Se-hoon (Park Hee-soon). A somewhat disgraced military man who is tasked with capturing Ji but comes to learn that not everything is as it seems.

My one complaint however are some of the hand to hand combat scenes. This is where the ‘Bourne’ style really works against it. The edits are quick and more often that not, shot too close to the action for us to really get a good view of what is going in. The chase scenes are fantastic though and as the carnage piles up the more explosive the action becomes, so the martial arts really play second fiddle to the rest of the mayhem.

Overall, I really enjoyed this movie and if you are a fan of Korean action films such as ‘The Man from Nowhere’, then this action thriller is right up your street.