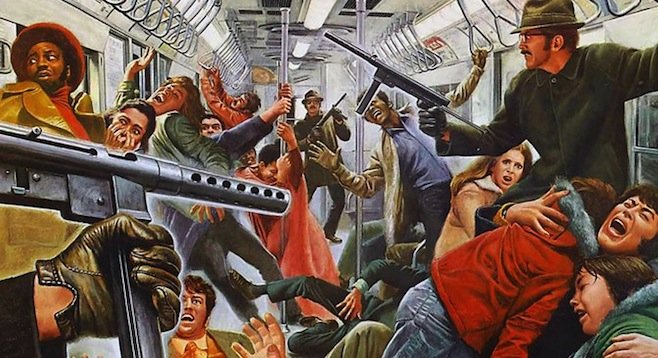 The Taking of Pelham One Two Three (1974) Review

Tight, suspenseful, and authentic, The Taking of Pelham One Two Three is not without humor or levity, and though it’s noticeably profane for an early ’70s actioner, it’s a memorable milestone for the genre.

Summary: In New York, armed men hijack a subway car and demand a ransom for the passengers. Even if it’s paid, how could they get away?

Review: By now, we’ve seen all the Die Hard movies and the riffs that emulated the tried and true formula of terrorists hijacking a plane, train, or automobile, and a hero foiling their plans, but if you look back a little further there are some milestones in the genre, things like Black Sunday, Airport, and The Taking of Pelham One Two Three. Set in and around a New York subway station on a chilly workday, a gang of four heavily armed terrorists hijacks a train car full of civilians and holds them for ransom for one million dollars cash. The men go by the names Blue, Green, Grey, and Brown, and their leader – Blue (Robert Shaw) – is a cold hearted and calculating man who won’t hesitate to kill innocents if his demands aren’t met exactly on time. Back at the control station, a tired and exasperated Lt. named Garber (Walter Matthau) takes Blue’s orders down and relays them to the mayor’s office, but eventually Garber has enough of the back and forth chatter, and he goes out to hunt for the terrorists on his own when they eventually get their money. It’s one thing that the hijackers have murdered several people to get what they want, but it’s another thing entirely for them to get away Scott free.

Tight, suspenseful, and authentic, The Taking of Pelham One Two Three is not without humor or levity, and though it’s noticeably profane for an early ’70s actioner, it’s a memorable milestone for the genre. Based on a novel by John Godey, and adapted for the screen by Peter Stone, Joseph Sargent’s direction is balanced and crafty. Remade twice: Once for television in 1998, and once for the big screen by Tony Scott in 2009.

Kino Lorber’s brand new Blu-ray release looks and sounds fantastic, with an upgraded sound and picture quality, much improved from the old MGM DVD. Also included on the disc are new interviews with co-star Hector Elizondo, editor Jerry Greenberg, and composer David Shire, as well as a new audio commentary, and extra features such as trailers and stills. This release is yet another solid output from Kino, and it’s affordable too.