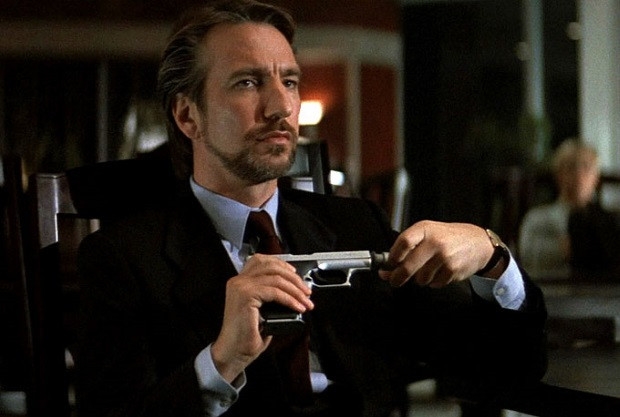 Rickman is, like many a beloved actor here on this site, someone who’s been in so ever many Action films so I thought I’d rate his best forays into the genre. And since he’s still painfully missed, I figure I’d sum up his ten best films sooner rather than later.

10. The Hitchhiker’s Guide to the Galaxy

I’m slightly cheating as this is primarily a voice-over role but this action-packed update of the Sci-Fi satire book/show successfully shows how the material is up there with other SciFi spoofs like Spaceballs and Red Dwarf. And Rickman’s Eeyore-like robot wandering around pathetically during some of the insane shoot-outs is also rather amusing.

One of Rickman’s first television appearances was on this Shakespeare retelling where he gets to portray the opposing role of Tybalt. Despite the TV presentation being far from theatrical-level quality and of limited interest at times, Rickman is no slouch, engages in a swordfight and comes off as dedicated as he would otherwise be on a live theater stage. YouTube clips can suffice but you can also access the full show on home media or thru a Broadway Channel subscription on Amazon Prime.

I must confess I still don’t personally care for this film but it is an important story on Ireland’s 1922 uprisings. It comes with the usual well-done scenery, speeches and a few less overdone dramatic liberties taken. Plus, I wasn’t going to put any of those Harry Potter films on this list so there’s that. Rickman acquits himself well here and since he’s just a supporting role, he plays it safe while still looking interested and being dialed into his character’s well-intended cause.

Primarily a comedy, there’s still plenty of angelic fighting, over-the-top gunplay and even mystical fantasy all throughout thus often underappreciated Kevin Smith cult film. Rickman unfortunately doesn’t get as much screen-time as he deserves. As God’s voice Metatron, he effortlessly lives up to that angelic title while also fitting right in with all the off-color gags.

In this slapdash mix of Elmore Leonard comedic noir and Quentin Tarantino-ish heist, Rickman proves up to the task of carrying the law enforcement portion of the movie and in a way even makes these non-criminal filled scenes somewhat more interesting than the actual getaway and violent plot twists. He has solid chemistry with detective buddy Emma Thompson and even gets to beat suspect Jack Conley’s bandaged foot with a gold club!

Some reviewers noted that they didn’t really care for Alan’s accent in this movie but I thought it was just as decent as his Southern impression that his Hans character in Die Hard uses. It’s definitely not a miscast role like his part as President Reagan in The Butler. Hell, it’s not anything bad like his co-star Costner’s failed accent in Robin Hood! So on those comparisons, I’ll stand firm on this and advise every cinema lover to reevaluate this film and for those who haven’t seen it to check it out now.

One of Rickman’s final roles was this modern-day warfare tale on drones being used to hit Kenyan suicide bomber targets and all the hard calls that have to be made with the strategies and consequences that arise from said actions. Rickman instantly convinces as the Lt. General and gets to partake in many key speeches in thus well-reviewed film which still somehow fell under the radar.

A far too uneven film due to once again being a matter of a leading actor’s ego and a director not wanting to sacrifice his vision, Rickman admitted to The Independent news media that he actually got together with two colleagues and rewrote his dialogue. And upon further reflection, one can definitely tell that it stands out more in contrast to the formulaic material that everyone else has to speak aloud. In addition to that, Rickman brings a different type of villain who is blinded by his crooked rule and brutal law enforcement instead of coming off as just a one-dimensional selfish brute. And his swordfighting alone is also worth a look.

“Never give up, never surrender!” As a Leonard Nimoy type SciFi genre actor annoyed with his typecasting and otherwise underappreciated Shakespearian level acting , Rickman gets to play along with this movie-within-a-movie which still continues to hold up to this very day. Rickman gets to share many more of the films inner conflicts, participate in a key fight scene and embrace some of the occasionally deep themes in this intentionally goofy film.

A cool stretch from his previous villain work, Alan gets to embody this sinister Aussie rancher who is making this territory a senseless ground for Aborigine massacres. And seeing Alan range between doing it all in the name of hunting justification to doing the usual duel of wits after using up most of his seemingly endless henchmen to kill Tom Selleck’s title character add to the morbid fascination of his solidly developed antagonist.

Here we are at number one and it was only inevitable that Rick’s number one role was the one that got him internationally noticed. As the soldier-turned-criminal mastermind, he gets to come off as a far more intelligent James Bond villain and feel beyond believable as the the bad guy who’s always one step ahead of everybody. It’s just as much his film as it is Bruce Willis’ and even the other franchise villains are handed the impossible task of attempting to one-up his notable quotability and devious nature.

Need another Actor of mighty Action films ranked? Hits us up and we’ll inspect their greatest hits!