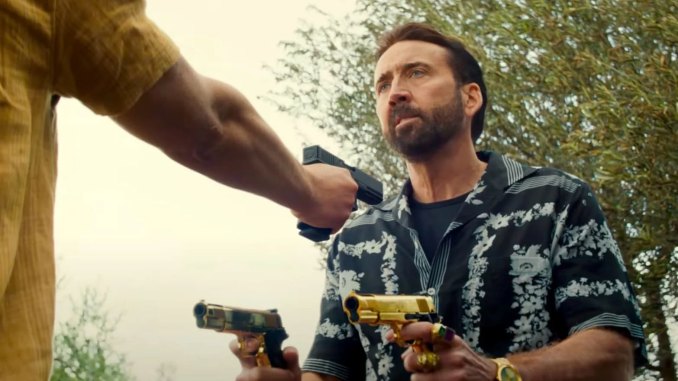 If you’re a fan of Nicolas Cage and his works, you’ll love this comedy, but the third act undermines the good work done in the first two.

Plot: Washed-up and in debt, Nicolas Cage agrees to appear at a billionaire’s birthday party  in Spain for $1 million dollars… but he gets more than he bargained for when he discovers his host is the head of an international crime syndicate.

Review: No other actor is like Nicolas Cage. Who else has appeared in such a wide variety of “marginal” films and given it their all, like him? No one. When I first heard about this film – Cage would play a fictionalized version of himself in a shit-bat crazy meta comedy – I was more than interested.  Did the film live up to the hype? Mostly.

The best thing about TUWOMT (I’m not writing that goddamn title every time!) is Cage’s willingness to lampoon his own eccentric image and make fun of idiosyncrasies. No matter how savage it gets. When we first meet Nic (as he’s called in the film), he’s having lunch with Halloween Kills director David Gordon Green about a part in an upcoming film. Cage totally hams it up in his impromptu audition and Green is left bewildered. Of course, Nic doesn’t get the part. That’s a fact the draws the ire of Nicolas Kim Coppola! – his youthful, interior voice, that always taunts the older Cage about his shortcomings. The scenes with the two Cage’s are by far the best part of the film. The scene where old Nic hugs and makes out with young Nic is hilarious!

As a comedy, TUWOMT, works quite well. The sequence were Nic and Javier drop acid and go on a bender in town is pretty funny, and Pascal, who plays Javier, and Cage seem to be having a blast with each other. Their tender moments, like when the duo watch Paddington 2 and burst into tears, are also great. And constant commentary on Cage’s recent shortcomings in the finance department are always dead-on. I wish it was just Cage and Pascal for the entire running time, but the third act gets bogged down in Nic’s “family” issues with his fictitious estranged wife and daughter, and the resolution of his cartel element is funny, but somewhat unsatisfying.

The film works best when it’s riffing on the life of its star, who is more than up for this high-concept digs at his missteps.  Is TUNW0MT the meta-comedy-for-the-ages it’s advertised to be? Mostly. No other star other than Cage would be so happy to lampoon himself and poke fun at their weirdness. All those elements work great, and the creative team couldn’t have picked a better partner-in-crime for him than Pascal, who is terrific too. But the CIA plot and family drama seem like they belong in another movie. I will say this, at least there’s a surprising body count for movie that’s a satire. Go with somewhat lowered expectations, and you’ll have a blast with TUWOMT.