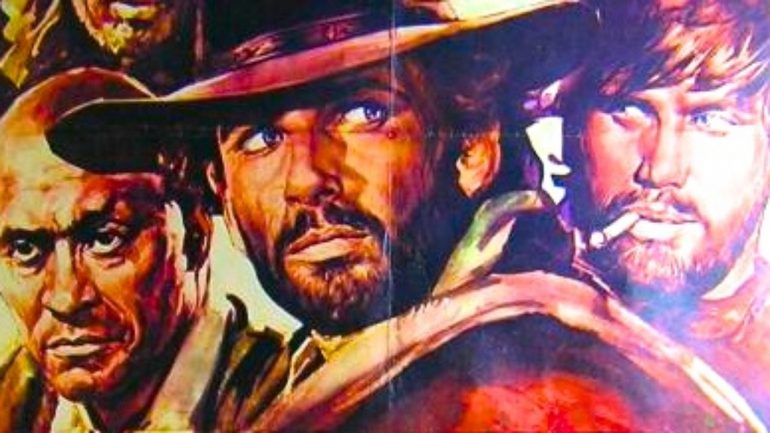 Kino Lorber’s nicely produced Blu-ray of The Unholy Four has brought the title back into the public consciousness, which is a real treat for fans of the spaghetti western genre.

Synopsis: A young man who has lost his memory, escapes from prison with three other convicts. The other men help him find back bits of his past, until they arrive at a village where two warring families recognize him.

Review: Four convicts in a lunatic asylum escape during a fire, and they go on the run, unarmed, but desperate for their freedom. One of the four guys (played by Leonard Mann) is an amnesiac who is quickly recognized by a stranger: He calls him Chuck Mool, and apparently Chuck Mool was a notorious gunman, long thought dead. The other three guys (played by Woody Strode, George Eastman, and Peter Martell) are a deadly pack of killers, and when they turn the tables on a posse of bounty hunters, they become armed and even more dangerous. When they wander into a town run by the ruthless Caldwells, the patriarch of the family convinces Mool that he’s his father and sets him up to go to the next town over with the hopes that he’ll assassinate his real father, the leader of the Udo clan. But luckily, Mool’s friends have his back and save his life, leading to an all-out shoot-’em up climax where the revelation of who Mool actually is is revealed.

From director “E.B. Clucher” (Enzo Barboni), the stylish spaghetti western The Unholy Four is a really entertaining motion picture from the height of Italy’s film production days. With an intriguing story, solid, violent action, and a vivid music theme by Riz Orlotani, The Unholy Four should satiate any western enthusiast’s lust for violence, mysterious heroes, and rollicking dustbowl dynamics.

Kino Lorber’s nicely produced Blu-ray of The Unholy Four has brought the title back into the public consciousness, which is a real treat for fans of the spaghetti western genre. The transfer looks and sounds great, and there are two audio tracks – English and Italian – with optional subtitles. Some bonus trailers and a reversible sleeve are also included.