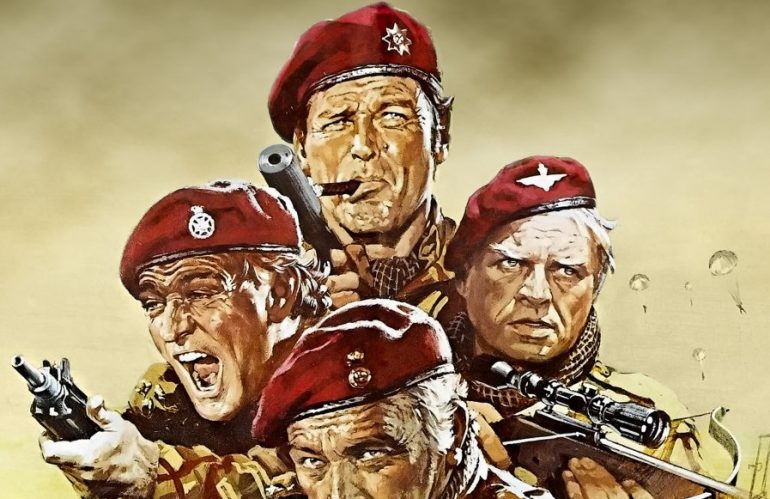 The Wild Geese is a little overlong but it’s still a riveting action film and the cast are fantastic. This new Blu-ray is worth it for the commentary from Roger Moore alone.

Plot: Mercenaries must plan and execute a rescue mission and then an escape route out of Africa in a military controlled area.

Review: The British government recruits the best mercenary in the business – Colonel Allen Faulkner (Richard Burton looking perpetually winded) – to organize a mission to Africa to rescue an imprisoned president and bring him to safety, and all to be done in a matter of weeks. It’s an impossible mission, but Faulkner’s up for the task: He recruits his best men – rapscallion Shawn Flynn (Roger Moore who breezes through this), Captain Rafer Janders (Richard Harris, who sparkles) who has become a happily domesticated father, and a whole slew of over the hill bored men who long for soldiering. The plan is set in motion, and Faulker has his men whipped up into the best shape as possible under the circumstances, and before anyone can say, “Yes, sir!” the men are already flown to Africa where they get to business. The rescue mission is easy for these old pros – it’s escaping Africa that’s next to impossible. Betrayed by the British government and left to face insurmountable odds and an army that vastly outnumbers them, Faulkner and his small battalion of men will face the ultimate challenge as they all must fight for their lives.

A riff on The Dirty Dozen with some solid leading actors to carry the film, The Wild Geese is a bit overlong, and a nail biting action film, if only because I allowed myself to become invested in the characters. I really wanted to see these characters win and survive, and when they get left behind and must fight tooth and nail to survive, my heart plunged when I realized this wasn’t going to necessarily be a happy ending for all of them. Burton looks grossly out of shape in the movie (he apparently hated filming the movie), but Harris and Moore are great fun to watch. Directed by Andrew V. McLaglen (Hellfighters), the movie was second unit directed by future 007 helmer John Glen. As for 007 himself, Moore shot this in between The Spy Who Loved Me and Moonraker, so he’s got the 007 charm on full display here.

Severin’s Blu-ray release of The Wild Geese comes with a DVD as well, and there’s an audio commentary with the late Roger Moore, which is a treat. There’s a documentary about the film, new interviews (this was released in 2012), vintage featurettes, and the trailer. It’s worth it for the Roger Moore commentary alone.