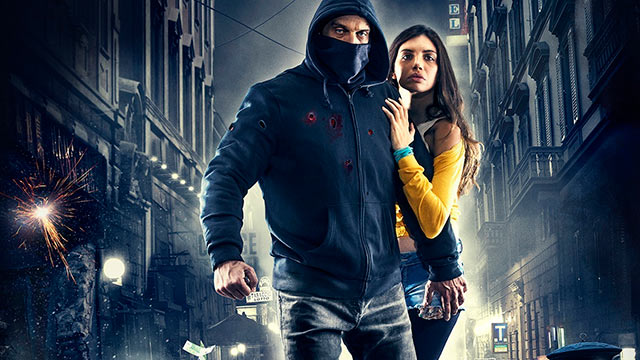 They Call me Jeeg is gritty with plenty of action and a great villain.

Synopsis: Enzo, a lonely and misanthropic small time crook, uses the superpowers gained after falling in the Tiber river to chase down a crazy gangster called “The Gypsy”.

Review: The urban superhero myth is alive and well in the gritty action crime drama They Call Me Jeeg from Italy. A low rent hood named Enzo (Claudio Santamaria) finds himself being chased after stealing an expensive watch. He falls into a contaminated river and emerges spitting black bile and toxic waste. He goes home an even more pathetic specimen of a man than he was before. When he wakes up the next morning, he’s famished. He feels great. He realizes with stark clarity that he has extraordinary strength. He goes out on a job with his boss, and the job goes bad real quick: his boss is murdered, and he’s shot and falls off a building. He gets up, and his own bullet wound heals pretty nicely. He’s free of responsibility now, so he puts on a hood and literally breaks an ATM from the wall and takes home the cash. He’s not too bright, though: He’s caught on camera, and suddenly the news is reporting about his bad deed. His neighbor is a mentally damaged young woman named Alessia (Ilienia Pastorelli) whose father was his boss. He doesn’t have the heart to tell her that her dad is dead, and so he decides to protect her from the local gangster named Fabio (Luca Marinelli) and his thugs, who come calling on her to find out what happened to her father. Enzo comes crashing in with his hood on and busts the baddies up real good. Fabio goes away seething in hatred. He makes it his mission to find out who the hooded superhuman hero is. Over the course of a week, Enzo allows Alessia to sleep over, and he has to restrain himself to take advantage of her because she ingratiates herself into his lonely life. She’s pretty and looks up to him, and she’s careless in how she dresses around him. Enzo, we realize, is somewhat of a child too, but he’s brutish and simple and isn’t very good around people. After Fabio finds out that Enzo is the superhuman, he kidnaps Alessia and forces Enzo to tell him how he got his powers, and this leads to Fabio becoming superhuman too, escalating an already volatile situation between Enzo and Fabio and the media at large.

With all of the larger than life superhero projects out there throwing CGI monstrosities at the viewer, I appreciate it when we can see an eye-level view of the common man coming into powers that change his or her worldview for the better. Enzo, as a character, is not an attractive character until he comes to understand that he has the power to be a hero rather than just a thug with an advantage. In many ways, They Call Me Jeeg reminded me of other indie superhero / vigilante movies such as Dark Justice and Defendor. This one is super gritty and (at times) pretty ugly, but it has redeeming qualities, and it’s also surprisingly fleshed out. It has a great villain who’s equal in power (but not integrity) to the hero, and it has a satisfying conclusion. Directed by Gabriele Mainetti.

They Call Me Jeeg is currently playing in theaters and will be on demand on May 2nd.