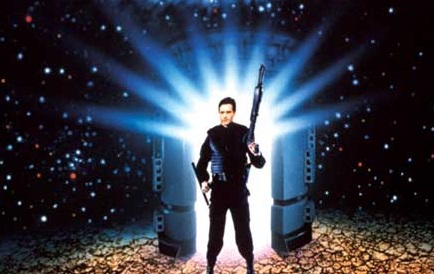 If you were a fan of Quantum Leap and Timecop, the TV series that spun off from the feature film starring Jean-Claude Van Damme, then Time Trax should be right up your alley.

Plot: Cop Capt. Darien Lambert travels from the 22nd century to the present in search of fugitives from the future, including his archnemesis, Dr. Mordecai Sahmbi, an insane scientist who does anything to avoid going back to the future.

Review: God bless the 1980’s and 1990’s for producing countless hours of television shows. Though I grew up in the 80’s and early 90’s, I somehow missed the two-seasons-only (1993-1994) show Time Trax, but thanks to Warner Archives, I’ve finally caught up with it.

The two-hour season premier pilot “A Stranger in Time” is set largely in in the year 2193 and follows an incredibly gifted supercop named Darien Lambert (Dale Midkiff), an Anglo-American who is considered a minority in the America of the future. He’s a superior athlete, soldier, and patriot who joins an organization that tracks criminals that have used a device called TRAX to travel 200 years into the past. He’s given a hologram sidekick named SELMA (played by Elizabeth Alexander) who is like a dictionary, encyclopedia, and a voice of reason all in one, and he’s equipped with a weapon called the PPT that can zap his targets back to the future. The woman he loves in the future – Elyssa (played by Mia Sara) – bears a remarkable resemblance to a Secret Service agent in the past, named Annie (also played by Sara), and a supervillain scientist – Mordecai Sahmbi (Peter Donat) is wreaking havoc in the past and declares Captain Lambert his nemesis.

After the groundwork is laid in the two-hour pilot, Lambert hunts the criminals of the future, one episode at a time, culminating in a Season 1 finale that is set in a mine in the earth where Sahmbi returns to pursue him for his PPT weapon. Sahmbi is a recurring character who shows up from time to time, finally coming to his end in the middle of the second season. There’s action in every episode, and if you were a fan of Quantum Leap and Timecop, the TV series that spun off from the feature film starring Jean-Claude Van Damme, then Time Trax should be right up your alley, as it is very similar to those shows. The joy of watching programs like Time Trax is relishing the simplicity of how they were executed. The stories are reasonably simple and easy to follow, and though the special effects are woefully dated and hokey looking now, the shows – and this one in particular – really tried to build a framework of stories that interconnected and followed its central character to a thread that lead somewhere. The show was cancelled after only two seasons, but with Warner Archives bringing both seasons to DVD, audiences who fondly remembered watching it when it aired – and newcomers like myself who missed it – can watch it at a leisurely pace and enjoy the entire program in uninterrupted glory. And hey, feature film directors like Brian-Trenchard Smith and Lewis Teague directed several of the episodes.