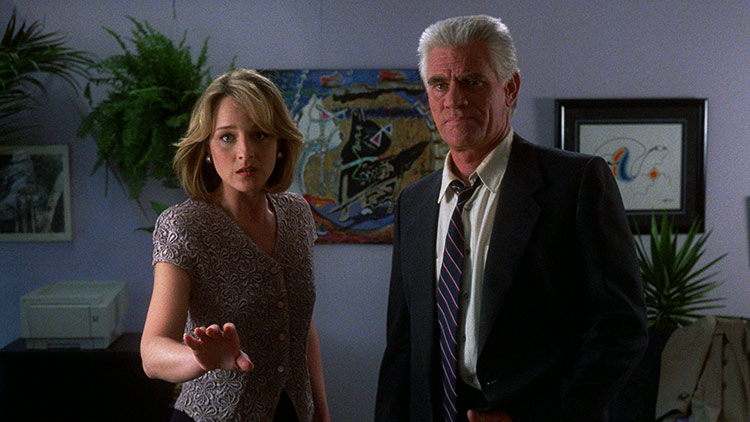 The third entry in the six-part series from Empire and Full Moon, Trancers III: Deth Lives is a good sequel to the second film, although it loses the intimacy of the characters that we grew to love in the first two films.

Synopsis: Jack Deth, a time traveling cop from the future, is taken back to the past to be given the task of destroying the Trancer program before it has a chance to get out of control, sending the world into a state of chaos and war.

Review: Facing turmoil in his stagnant marriage to Lena (Helen Hunt), future cop-turned low rent private eye Jack Deth (Tim Thomerson) is captured by an alien future soldier and transported back to the future (to the year 2352) where he’s greatly needed. Annoyed that his comfy existence in Los Angeles 1992 has been interrupted, Deth soon learns that the future is a scary place, overrun with Trancers. The high council (a governing party that keeps the peace after the Great Quakes of 2069) has all but been destroyed, and so Deth is told by the leader of the resistance (played by Megan Ward, reprising her role as Deth’s wife from the future) that he must go back to 2005 when the government began implementing Trancers into the military program. Deth goes with the intent to quell the Trancer program from ever happening, but it’s more complicated than that: He ends up meeting Lena – now a doctor and involved in the Trancer program – who resents that he disappeared that fateful day when he was taken back to the future. In addition to that, he teams up with a tough chick that (surprise! is also a Trancer) doesn’t realize the side she’s on.

Jack Deth’s life has never been this intense.

The third entry in the six-part series from Empire and Full Moon, Trancers III: Deth Lives is a good sequel to the second film, although it loses the intimacy of the characters that we grew to love in the first two films. Deth is clearly the focus here, and there’s more action than ever, but this is where the series started going off the reservation and pushing for more science fantasy adventure. A bonus of this entry is that the makeup effects were done by KNB, and the script by C. Courtney Joyner (who also directed) is fun with a nudge to The Terminator.

Full Moon’s new Blu-ray of Trancers III looks and sounds superb (it’s widescreen for the first time), and the commentary by director Joyner and Thomerson is fun to listen to. Here’s hoping Full Moon releases the rest of the Trancers films on Blu-ray soon.