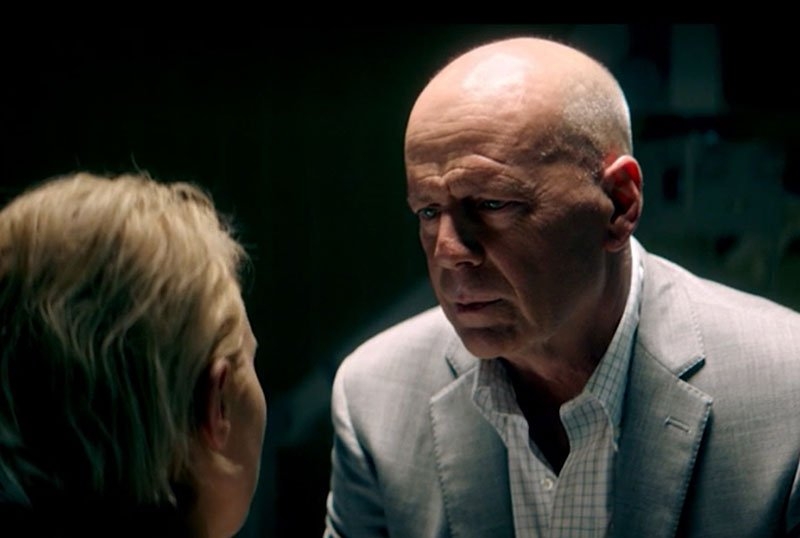 A straightforward time-killer but best to wait for streaming or cable TV first.
Plot: Alone and trapped in a locked-down hospital isolation ward overnight, Madison (Nicky Whelan), an injured young woman must escape a pair of vicious crooked cops, Tull (Texas Battle) and Pierce (Tito Ortiz), who are after the only piece of evidence that can implicate them in a grisly murder: the bullet in her leg. Luckily, veteran Det. Wakes (Bruce Willis) is assigned to protect her as the after-hours scenario grows far more deadly.
Review: Protecting unusual witnesses to a crime has been a fascination since the days of Narrow Margin, and Bruce has done plenty of that previously in films like Mercury Rising and 16 Blocks. Dubbed appropriately by some as “Die Hard in a hospital” and featuring almost as much claustrophobia as Panic Room. Keeping it simple but always high-octane with tension, chasing and fighting, this film brings nothing new to the table while still being loud and lively.
Tito was great to finally see in a bigger film role after years of claiming he was going to be the next Vin Diesel yet barely featuring in movies, let alone decent ones. Texas Battle as the brains of the villain duo did solid. I wouldn’t mind seeing lead star Nicky in more films and she did a solid job although I didn’t really find her backstory interesting. Bruce got to shoot some guys dead, looked intense all around while briefly rushing a quick come-back and even got an end fight scene (but it was disappointing that it wasn’t with Tito). Both leads had no chemistry together but since this was a rushed production and it was all about Nicky escaping throughout the locked-down hospital while Bruce tried to solve the conspiracy outside, it was hardly a flaw that huge like it would be if this were a Comedy or Romance. Steve Guttenberg is often mocked and enjoyed for his goofy nature but has shown dramatic fair before- although mainly in TV appearances and unseen indie films. His cameo wasn’t mediocre at all though.
A better quality limited release and VOD on par with Marauders, First Kill and 10 Minutes Gone and far from lesser crud like Vice but still missing the perfect Bruce we know from recent mainstream material like Glass, Death Wish and the RED films. It aims to please and definitely wasn’t phone like every other Emmett/Furla production and the rising filmmakers definitely had more of Steven C. Miller’s pros and less of Brian A. Miller’s cons. Put it on in the background if you need an easy streaming title to view or multi-task to or wait for the $5 bin. If you need an easily accessible date movie at the exclusive release theater and this is you and your date’s compromise, you won’t necessarily remember it all but you won’t be bored shitless either.