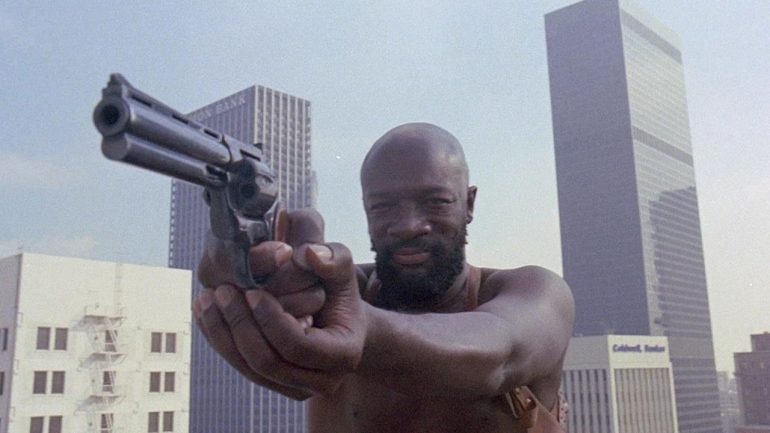 The BEST blaxploitation movie… EVER!

Plot: A grizzled, down-on-his-luck bounty hunter becomes the target of a vicious madam and her thugs after he takes down her boss.

Review: When I was growing up, many people said that Shaft, the original 70’s film, was the definition of classic blaxploitation. After seeing that movie, I found it to be all sizzle and no steak. Sure, Shaft was cool, but he didn’t do much and the movie was slow. In my eyes, the real contender was 1974’s action-packed shoot-em-up, Truck Turner, starring the one and only Isaac Hayes as the world’s biggest badass!

Hayes is Mac “Truck” Turner, a bounty hunter, whose life is far more complicated than he’d like. Basically broke, Turner lives in a slum, cares for a cat that pisses on his clothes whenever he’s not looking, and has a girlfriend who is a part-time kleptomaniac who is currently behind bars. Of course, his lively partner Jerry (Alan Weeks) thinks this is all rather hilarious.  When the pair get a call to bust  a pimp whose skipped bail, they get way more than they bargained for! Gator, the pimp in question, is a ruthless, trigger-happy whacko that won’t be easy to apprehend. Luckily, Turner is up to the task, and before the day is out, has blown away Gator with his trusty 357 Colt Python!  This is when the real fireworks begin. Gator’s number one madam, Dorinda, (Nicholls) ain’t happy and has a hit put on Turner and his partner.  Vicious, but calculated, thug Harvard Blue (Yaphet Kotto in another outstanding performance) takes the job… and soon bloody mayhem ensues.

Truck Turner is everything that it’s advertised to be. Violent? Hell yeah! Profane? F#*k yeah!! Fast? Most definitely.  Hayes is perfect as the hero, bringing a confident swagger to the role, but thanks to his Turner being a regular Joe with real world problems, the character is always relatable and often hilarious. Alan Weeks who plays his partner, Jerry, is a blast, and the acting duo seem to have a real chemistry in their scenes together. Nichelle Nicholls, of Star Trek fame, completely buries her character from that iconic show with her performance as Dorinda, the mean, mouthy, madam who treats her stable of girls like they were nothing but meat. Nicholls is a real delight in this film, and one of the best blaxploitation baddies to ever grace the screen. Kotto, as her trigger-man, almost walks way with the film like he did with every role he ever played. And his death scene is like master-class in acting. RIP Mr. Kotto, you were excellent.  Annazaette Chase, as Turner’s girl, Annie, is pretty funny and the scenes she shares with Hayes brought a smile to my face many times.

Respected  A-list director Jonathan Kaplan (Unlawful Entry, Immediate Family) helmed this movie, and his direction is a cut-above the norm for this kind of picture. His keen visual eye captures the action and carnage  in gritty, brutal detail. The score, by Hayes, ain’t bad either!

Truck Turner is the real deal. A blaxploitation film that delivers on all counts! Hayes has never been cooler and Kotto is brilliant as the lead heavy. Running at a lean 91 minutes, the movie is fast, and once the mayhem begins, it will take your breath away!