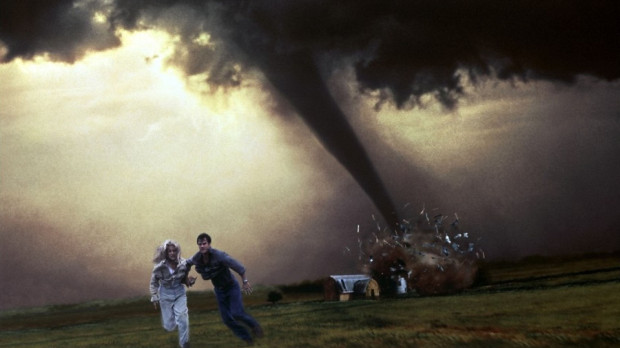 This soundtrack is the most complete representation of Mancina’s score ever released.

Review: Jan De Bont’s rollercoaster thrill ride Twister swept up the box office in 1996, and one of the key assets of the film was its adventurous score by Mark Mancina, who was smack in the middle of a great period in his career as a film composer. His scores to Speed, Bad Boys, and Fair Game were all knockouts, but his music to the very big budget Twister was his most mature and thematic to date, with a distinctly “western” sound that made it sound like it was set in the old west. His pulse pounding and powerful compositions really elevate the movie into almost epic status. Mancina, who in this period of his career was the “go-to” guy for action films (and rightly so; he composed great themes), had mostly been associated with electronic, synthesized music, but his wide-open symphonic score for Twister is one of the biggest and best scores he ever composed.

La La Land Records has just released an “Expanded Archival” soundtrack record of Twister, and it’s a noted upgrade from the previous release from Atlantic Classics back when the film came out. With over 60 minutes of music (which includes 11 tracks containing unreleased music), this soundtrack is the most complete representation of Mancina’s score ever released. This CD is limited to only 3000 units, so make sure to pick one up before they’re gone.