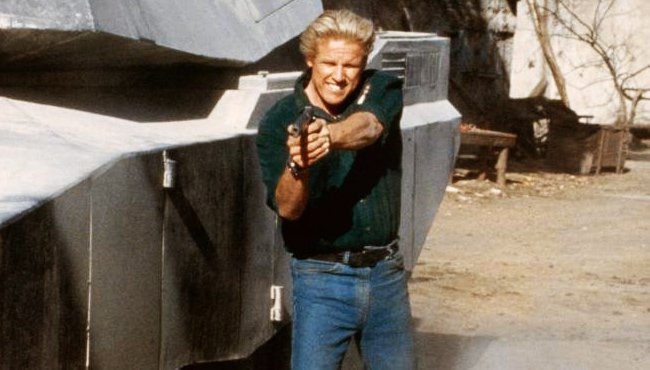 Plot: Frank McBain is a big city cop with a habit of surviving getting shot in the line of duty over a dozen times. He earns the moniker “Bulletproof”. When a super-secret ultra-comfortable prototype Tank is hijacked by Guerillas on the Mexican border, McBain is sent by the government to retrieve it. Not only does his girlfriend happen to be the commander in charge of the mission, but the terrorists turn out to be a multi-national invasion force with Mexicans, Nicaraguans, Cubans, Libyans, and Soviets all teamed up to destroy America with the help of their new tank.

Sharkey: What the fuck is this?

To be quite honest, I had never heard of Bulletproof until a mutual friend had recommended it a few weeks ago, plus seeing Gary Busey as the lead in particular piqued my interest in this quite a bit.

I’m actually surprised this one flew under the radar as this was a gem of an action flick! Not only does Busey excel in this role, but so do some of his co-stars in particular Darlanne Fluegel who plays a strong female character proving she’s just as capable as our lead. We also have Henry Silva who’s clearly having a ball playing this villain which is fun to see. Also, look out for both Danny Trejo and Cary-Hiroyuki Tagawa in small roles.

The action is incredibly satisfying not only from the opening set piece, to the finale which is exciting and thrilling. The story is pretty decent, albeit predictable but I can deal with it especially with how it moves at a pretty good pace which I always appreciate.

Overall, Bulletproof is an action film that delivers exactly what you want for this kind of film; you have a solid cast, great action, a quick pace and it has a good enough story to keep your interest.

As an added bonus I found a Kill Count for Bulletproof so let’s see how many scumbags Busey takes out.

44? Hell yes! If your kill count isn’t in double digits are you even an action hero?