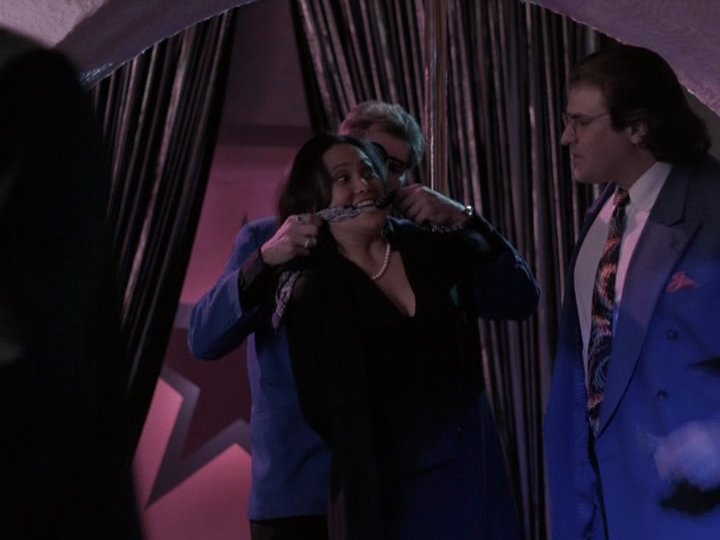 Plot: In Las Vegas for a quickie divorce, a just-paroled ex-cop and his wife wander into the Top of the World Casino, run by the shady Charles Atlas. They win big, right as the casino is being robbed. The police believe their big win was a staged diversion, and the two of them become suspects. Over the course of the evening and next morning, the two attempt to escape to surrounded casino, and to prove their innocence, as well as to save their marriage.

Here’s another underrated action film that no one talks about, but should.

It has a great cast that uses them mostly well, but nevertheless they still shine in the parts they’re given.  Our lead(played by Peter Weller is solid and has some good lines scattered around throughout the film.

The supporting cast also does a solid job particularly Dennis Hopper and Tia Carrere. There are some I forgot were even in this, including Joe Pantoliano, Cary-Hiroyuki Tagawa, and Peter Coyote.

The action in this one is very solid, especially a car chase that rivals ones that they do in Hollywood these days, it’s that good. The rest of the action is mostly shootouts, but they’re very well done for this type of film.

My only big problems with the film is some of the editing especially at the beginning is a little choppy at times; David Alan Grier is incredibly pointless and honestly anybody could’ve played that role. Cary-Hiroyuki Tagawa, while it’s nice seeing him play a good guy doesn’t get to do much, but what can you do?

Overall, Top of the World is a fun action film with a pretty decent story that has a great cast, has some solid action, and moves at a good pace. Definitely recommend it if you haven’t seen it!