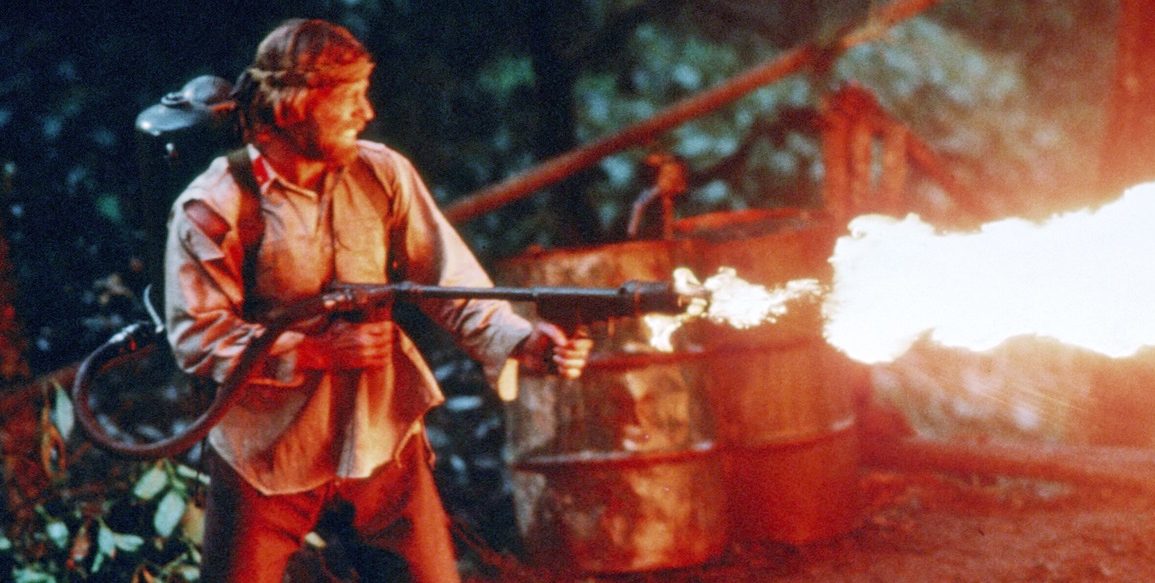 Being a kid raised on movies and American pop culture on the whole, I was bound to discover that some things weren’t I thought the way they were. For example, when I first heard in a history class about the U.S. losing the Vietnam War, I was genuinely confused. I mean, how could you possibly lose with the likes of Sly and Chuck fighting on your side? Alas, every teenage paradise of ignorance is meant to end and, thus, I had to face the facts. Yet, this loss of war in Vietnam has led to a certain phenomena in action – if previously heroes would take revenge against people who wronged them or killed the ones they loved, this time, action heroes would get back at Vietnam.

Once Reagan was elected president, a militant revanchism resurged in the American society. Reagan, being the kind of leader he was couldn’t ignore the allegations of the American POWs still being held in Vietnam. For decades and, to a certain extent, nowadays, some people believe that there are still American servicemen, who were held captive by the Vietnamese after the war. This belief, in turn, has led to the creation of several movies on the subject. The most notable is, of course, ‘Rambo: First Blood Part II’, where Rambo finally goes shirtless and shoots some people. There many more, of course, such as the lost gem ‘Uncommon Valor’, starring Gene Hackman and Patrick Swayze, who reached the peak of his own manliness in this movie. Despite the differences, all of these movies have one central message – no man gets left behind, no war is over until all of the boys are back home. Of utmost importance for the movie is the theme of loyalty, patriotism, and defiance in face of the most insurmountable odds.

To begin with, both the ‘Beginning’ and the actual first movie were shot back to back, since Cannon Group was always big on reducing costs and time, them being kings of B-movies.  It was only at the last moment that Golan and Globus realized that the intended sequel was a far superior movie and they would release the one planned as first as a prequel next year. That is the reason the writing credits for the first movie have a ‘based on characters created by’ piece.

So, in this movie Chuck – who stars as colonel Braddock once again – is imprisoned after the war is already over in the Vietnamese prison camp along with a bunch of American and South Vietnamese soldiers, who are wrongfully accused of war crimes. Sadistic and smug colonel Yin, as befits a good ole’ 80s movie villain, rules over the camp with an iron fist. Two henchmen, a bulky one and a skinny one aid him in his evil plans. His Grace Professor Toru Tanaka, making him a credible threat to our heroes, plays the first, going by the name of Lao. I guess, every antagonist needs an underling, who is somewhat loyal, actually competent and might end up being even tougher than the villain himself. As if Yin wasn’t enough, he is secretly in league with a French druglord Francois, who smuggles hookers, black market goods and booze into the camp and together the two use an American military helicopter to transport heroine.

On the other side, we have Chuck – a father to his men, a true warrior, who remains a loyal soldier even in the face of defeat. His loyalists include Italian-American kindhearted pet lover Mazilli (Cosie Costa), a tough pale-skinned blonde Opelka (Joe Michael Terry) and a few others. There is also captain Nester (Steven Williams), a former American soldier, the only one out of Norris’s group to break down and defect to the enemy. Using whatever means he can, Yin tries his best to break Chuck and make him confess to the alleged ‘war crimes’. From time to time he either lies, claiming that he will have Braddock and his men liberated and sent back home, threatens them or acts more subtly, claiming that the colonel’s wife is tired of waiting for him and is about to remarry. None of this has an effect on Braddock. In the end, after being pushed one time too many, Braddock escapes the prison camp. A lesser man would have run for the Thai border. Chuck comes back to liberate his comrades and take revenge.

Despite what you might expect from an 80s action movie, ‘Missing in Action 2: The Beginning’ seems like a serious movie, at least at times. The first half is more of a prison thriller than an actual action movie. Moreover, some stuff in the film is pretty heavy, at some point, a South Vietnamese sidekick and ally of Norris, captain Ho, is sexually abused by Francois’s hookers on Lao’s orders and for the latter’s entertainment.  The plot, while standard, has a few surprising moments. If you haven’t seen the movie before just a heads up that past this point, there will be spoilers.

Opelka, who escapes in the middle of the movie and is supposed to be dead or irrelevant to the plot is alive and found by Braddock in the jungle. Turncoat Nester, after being reduced to Yin’s servant (what a shining example of communist hypocrisy) finds some willpower to fight back and dies for his brothers in arms, albeit only after much of soul searching and intense inner struggle. And while the second movie doesn’t have any iconic moments like Chuck rising out of the water as it happens in the first movie, it is still far from being the worst sequel out there. If anything, one can enjoy the final boss fight between Braddock and Yin. For the first one it is a case of revenge, while the second just wants to defeat this pesky American once and for all, proving himself he’s the best (he isn’t). It might not have aged well, especially compared to the likes of ‘The Raid’, but it is a brutal and uncompromising fight. The movie may not have enough drama, but it certainly has soul, some heart and the feeling it tries to create is genuine. It is horrifying to see Braddock and his men abused by the likes of Yin, it is gut wrenching to see their hopes crushed.

It makes you cheer for Chuck when he finally kicks the bastard’s ass so hard and permanently cripples NVA. Ain’t no victory like a hard won one, am I wrong?