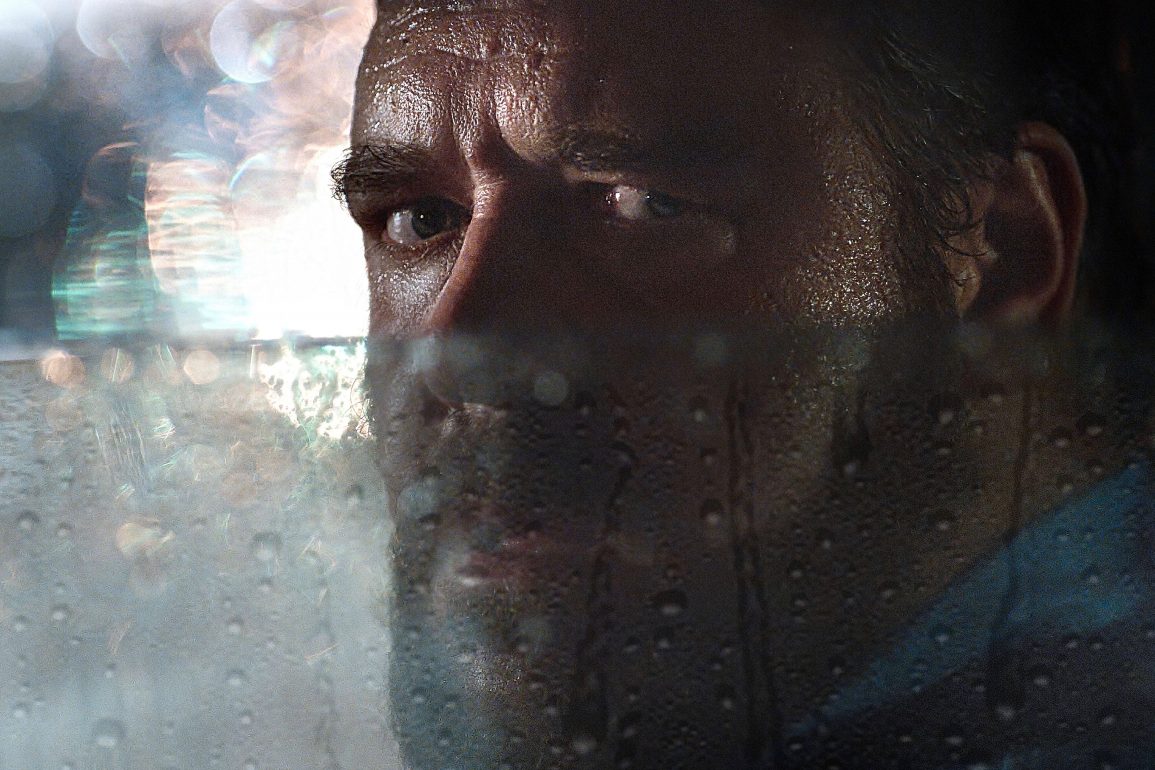 Unhinged is a white-knuckle urban thriller that gives Russell Crowe the chance to chew scenery and be generally unpleasant. Looking for no frill thrills, I urge you to check it out when it opens…

Plot: A mother leans on her horn at the wrong time, to the wrong guy. Road rage doesn’t begin to describe what he’s about to do to her and everyone she knows.

Review: Russell Crowe has been away from the big screen for too long. In an arena populated by try-hard tough guys, he looks and acts like the real deal in this dressed B-movie that aspires to teach as us all a lesson about morality… in between some brutal carnage and old-school car chases.

Crowe is The Man, a regular guy who has lost his family from an all too common messy divorce. We never really find out his name, he gives one but it could be fake, and we don’t need to know it. Crowe’s demented eyes tell us more than a name or a backstory ever could.  Naturally, given the title, we open with him doing something scary – he murders his family, including his ex wife’s new man, and blows the house up before driving away in one of those shots that is pure action cinema.

With Crowe’s credentials in place, the movie begins with single mom Rachel (Caren Pistorius) trying to get her son to school, and keep her job, in the chaos of morning peak hour.  Thanks to her being disorganised and always blaming others for her troubles, Rachel finds herself late, and fired. Of course she then goes bumper to bumper with Crowe, who is ahead of her in traffic. With emotions running high, and Crowe being unhinged, a road rage incident occurs, and our boy Rusty isn’t about to let this vulnerable woman off the hook for her misdeeds. He is going to teach her a valuable lesson… and make her life, and those around her, a living hell.

What you see is what you get with this film – a well made, but familiar psycho thriller with a giant of the acting world completely owning his turn as a self-destructive psychopath. – and that’s not a bad thing! Crowe’s anonymous madman is the highlight of the zippy thriller and he’s never been scarier!

Caren Pistorius plays the damsel  in distress and she does what she can with her limited role, but she’s blown off the screen whenever Crowe comes on.

Director Derrick Borte handles the mayhem and murder with efficiency and authority and delivers a couple of effective jump scares that had people in the theatre squirming in their seats. Good job there.  DP Brendan Galvin’s work is also excellent and one of the highlights. He’s looking like the go-to guy in Hollywood if you want clear, clean on screen action.

As I said earlier, the film is surprisingly brutal and old-fashioned in its action. There are no flashy CGI car explosions or collisions. Everything seems to be kept real and performed in camera. The murders are fast and gruesome, something we haven’t seen in a long time in a psycho-thriller, and if you’re squeamish you may wanna look away when someone is stabbed in the head with a knife or another victim gets a pair of scissors through the eye socket. This movie is tough. And makes no apologies.  It even concludes with an 80’s-esque one-liner that had everyone howling with delight.

Overall, Unhinged is no holds barred thriller with a brilliant turn by Crowe, who is superb, and some exceedingly gruesome murders and pulse-pounding car chases. Because it doesn’t get bogged down or preachy in its message of today’s society being entitled rageaholics, the film comes off as a satisfying  time killer, perhaps one that would have been fairly common in multiplexes in the 90’s. I recommend you check this one out. You won’t be disappointed.