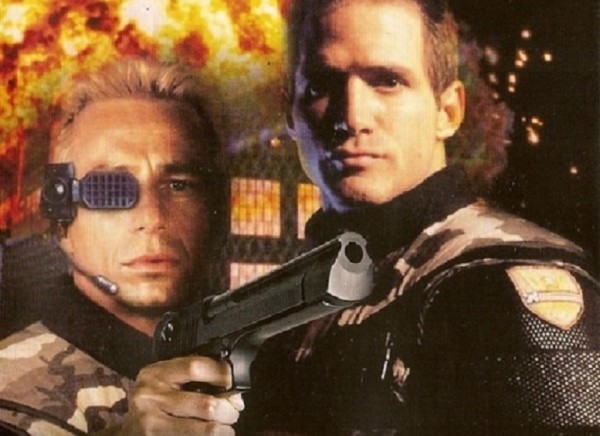 Unfinished Business can only be recommended for die hard Unisol fans, people with too much time or people who have a weak spot in their film hearts for sloppy crazy B Movies.

Plot: Luc Devereaux and Veronica Roberts continue their attempts to expose the Universal Soldier unit. But after a hostage situation mistakenly leaves Veronica a fugitive, the two escape the city and go into hiding. CIA Deputy Director Mentor and Dr. Walker are also in the middle of literally ‘growing’ a powerful new Universal Soldier clone of Luc’s brother Eric to assassinate him and Veronica. Now it may leave Luc no chance to end it all.

First of all I have to say that the action is exactly as boring as in the previous movie (exception for Wincott, who is dramatically underused but at least can throw some kicks here and is kind of a Unisol). The acting is still very wooden (Battaglia is painful to watch at times; you have the feeling they told him he is a Terminator not a Unisol) and the music score is one of the worst I ever heard, totally misplaced.

On the positive side, as a replacement for wild Gary Busey we are getting the one and only Burt Reynolds. You understand how big his financial difficulties were at that time, when you keep in mind that only some months earlier he did Boogie Nights (Oscar nomination).

So this maybe was the lowest point he reached in his career at that time. In the last few years he really deteriorated and it is sad to see him that sick and skinny.

Back to Unfinished Business; although the movie is awful, Burt seems to enjoy himself and legend says he accepted the role to act with an Irish accent (and to get money, of course). I only saw the movie in German but from other reviews I read it is the worst Irish accent ever in movie history.

At least he gets some good one liners in the movie, like: “I need a favor; I need you to die, but it will be only temporary”. Brothers in Arms and Unfinished Business were actually shot back to back and as a backdoor pilot for a TV series that, thank god, never materialized. Where Brothers in Arms felt like a real follow up to the first film, this one simply shits on all the boundaries.

*Spoilers* First of all, the story makes no sense….Why does the CIA Deputy Director needs Unisols to steal Nazi Gold? But that is the least of all the movie’s problems. Another example? Luc and Veronica go to Canada to escape and to get Veronica’s Ex to help them.

They meet up at a party which immediately gets taken over by terrorists, who force Veronica to read their demands live on TV to hide their identity. Once Luc kills the terrorists on TV (in 2 minutes), everyone knows where they are and the chase is on again. Oh and the three terrorists are brought back as Universal Soldiers. No reason why or how. There is even the first female Unisol.

The clone of Eric (Jeff Wincott) has all the memories of Eric and remembers Luc. And to top it all, after the open ending it really wants you to believe that Bill Clinton is a Unisol! It is sooooo crazy and over the top that with some booze and only with booze, believe me, you can have a good time.

Overall, Unfinished Business can only be recommended for die hard Unisol fans, people with too much time or people who have a weak spot in their film hearts for sloppy crazy B Movies.

The Universal Soldier Franchise is maybe the most wear-resistant franchise ever. The first one was an instant classic (5/5). Then there are these shitty TV Movies, a Van Damme Sequel which ignores the TV Movies (Universal Soldier –The Return 3/5) and has its own big issues. The first direct to DVD Movie of the franchise, that ignores everything before except the first one, really regenerated the Franchise (Universal Soldier Regenaration 4/5). The direct sequel is kind of a cult movie that leaves people only in love or hating the movie (I love it: Day of Reckoning 4,5/5). I hope we get to see another one, because one thing is for sure, it never gets boring with our favorite Soldiers.