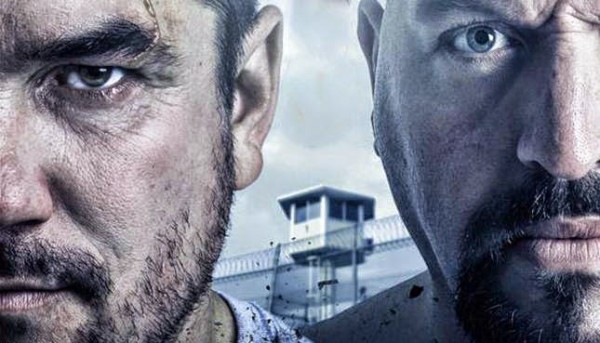 I had a really good time with it. The Big Show has arrived, as far as I’m concerned, and I’m not just looking forward to whatever WWE puts him in next, but I’m really excited about their next film The Condemned 2 with Randy Orton. If Vendetta is any indication of what they’re willing to do to shake up the pot, then let’s get this party started.

Plot: A detective pushed beyond his limits will stop at nothing for vengeance. When his wife is killed by a criminal that he put away, Mason, a hard-nosed detective, deliberately gets arrested in order to get revenge. While inside, Mason discovers a new criminal enterprise that those behind it would kill to protect.

Review: Here’s the thing: Every time WWE Studios announces their next slate of movies featuring their in-house wrestling superstars, I get excited. I don’t watch wrestling. Never have, never will, but the fact that WWE has built a roster of action stars-in waiting through wrestling entertainment in this downloadable age of cinema is a feat that only very few fans of action cinema can understand and appreciate. If you miss the days of The Cannon Group and the heyday of ninjas and mowing down bad guys with machine guns, then pay attention to WWE Studios and the art of the body slam because they’re the Cannon of today.

Since WWE tried to make John Cena an action star with the PG-13 rated The Marine, I’ve been on board with what they’ve been trying to do. While most of the films cater to the PG-13 demographic, the occasional hard “R”-rated entry gets out there like The Condemned with “Stone Cold” Steve Austin or the latter three entries in The Marine franchise.

Basically, WWE has been testing the waters with their in-house stars with these relatively low budget action films, and while the results have been all over the map, the intention is always there to create the next big deal in action movies the way they helped cultivate Dwayne “The Rock” Johnson and “Stone Cold” Steve Austin into mainstays in the genre outside of WWE’s parameters.

John Cena – after four (The Marine, 12 Rounds, Legendary and The Reunion) PG-13-rated WWE films – failed to ignite a spark with fans of action movies because WWE played it too safe with him. We’ve gotten minor efforts with Adam “Edge” Copeland (Bending the Rules), Paul “Triple H” Levesque (The Chaperone and Inside Out), Randy Orton (a supporting role in That’s What I Am and the lead in 12 Rounds 2: Reloaded), Glenn “Kane” Jacobs (both See No Evil movies), Dylan “Hornswoggle” Postl (Leprechaun: Origins), and some better entries with Ted DiBiase Jr. (The Marine 2), and hit-and-miss movies with Mike “The Miz” Mizanin (Christmas Bounty and The Marine 3 and 4).

The one guy I wasn’t really paying attention to was Paul “The Big Show” Wight, who had headlined the goofy WWE comedy Knucklehead, but when it was announced last year that he would be starring in Jen and Sylvia Soska’s Vendetta I got real interested because this would be the first time I would get to see the 7 foot tall Wight in a real action movie, and directed by the Soska’s no less. The Soska twins have come from really edgy horror films, and while I didn’t particularly care for their See No Evil 2 film, I was definitely primed for what they would do in the action genre, and now that I’ve seen the hard “R”-rated Vendetta (in a theater, guys – it’s playing in some cinemas this week and it’s also available VOD), I can report back on the film and how “The Big Show” fared in his first real action piece.

Vendetta lays the groundwork for the rest of the movie in the first handful of scenes. Good cop Mason Danvers (Dean Cain, who tries real hard to be an action star here) busts bad guy Victor Abbot (Wight, who even on his knees stands almost as tall as Cain on his tiptoes) and his scuzzbag brother Griffin (Aleks Paunovic), but both brothers are released on a technicality the very next day. The first thing Victor does is go straight to Danvers’ home and brutally murders his pregnant wife in a graphic scene that had my jaw gaping in surprise. Danvers shows up just a second after Victor has done his work, and the enraged cop shows shocking restraint by not killing him right there on the spot.

That’s where the movie pretty much drops the title of the film on you, and so I was ready for the next transition, which puts Danvers in full-on Punisher mode as he hunts down Griffin and some of his associates, killing all of them in cold blood in front of another cop just so that there’s a witness to his crime. Danvers is quickly processed, declared guilty, and in seconds of screen time he’s already in the slammer in the same penitentiary as Victor, who is running the place like a demented Bull Hurley (Over the Top, guys: pay attention), lording over the big house.

Victor is so absolutely in charge that his minions skitter around him, afraid and in awe of his beastliness. When Danvers encounters him, though, he doesn’t bat an eye, and in fact something deep and good has broken in Danvers’ own soul and he has no other purpose in life other than to kill Victor and everyone who dares to be on his side. The vendetta is his mission, and nothing else matters. He gets jumped (but not raped), beaten, and thrown in the hole for weeks at a time, and yet he always comes back out to ambush and murder another of Victor’s men until Victor runs to the oily warden (played by Michael Eklund who is on his 6th WWE release), who sees that Danvers is on a rampage and realizes that something must be done about it.

The warden – who has a dark history with Victor – gives him some leeway to kill and murder with extreme prejudice on his watch, but Danvers somehow always comes out on top until the climax when all hell breaks loose when there’s a prison raid, with full-on chaos and pandemonium throughout the prison. The prisoners go on a feeding frenzy, tons of guards are slaughtered, and Danvers finally has his chance to go one-on-one with the mountainous Victor, who is a brick wall with legs.

There’s a lot to like about Vendetta. The Big Show gets to showcase what a monster of a man he is. Sometimes he doesn’t even have to move a muscle to beat a man down in this movie. When he’s active, he throws guys around, pummels Dean Cain to a pulp, and he’s a wonder to behold. He’s technically an action star, but since he’s not the hero, we’re never rooting for him.

The role that Dean Cain plays should have been played by somebody like Scott Adkins or once upon a time by Lorenzo Lamas or even Michael Dudikoff, but Cain does what he can (and a little more, surprisingly) with it, and he makes it work. If you won’t watch this movie because Cain is in it, you’re making a mistake. Watch it because The Big Show is in it, and Cain will win you over. The Soska’s haven’t forgotten their roots in horror, as this is easily the goriest film from WWE studios outside of maybe the first See No Evil movie.

In Vendetta, characters are beaten to death, stabbed until their faces are unrecognizable, choked, bludgeoned, forced to commit suicide, shot, thrown off buildings, and crushed to death. This is like those prison movies from the 70’s and 80’s where they would even throw a crazed dwarf at the audience (Cannon’s Penitentiary III, hello?) just to get a reaction from them. Vendetta – as corny as it is sometimes – really goes for broke and shakes up the pot WWE has been stewing for the last decade, and it’s a jambalaya of exploitation goodness fans of these types of movies shouldn’t be able to resist.

I had a really good time with it. The Big Show has arrived, as far as I’m concerned, and I’m not just looking forward to whatever WWE puts him in next, but I’m really excited about their next film The Condemned 2 with Randy Orton. If Vendetta is any indication of what they’re willing to do to shake up the pot, then let’s get this party started.