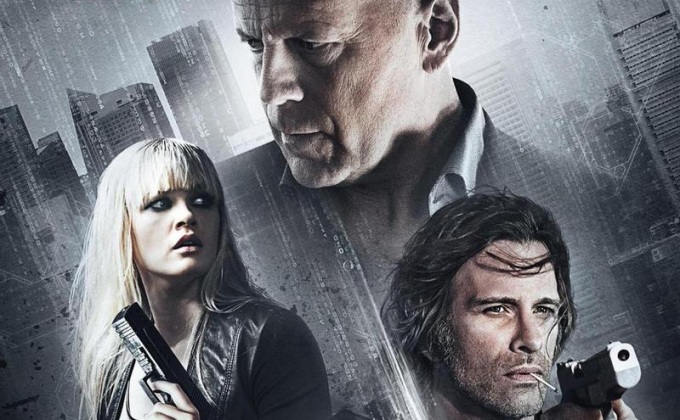 If I was Thomas Jane, I would call my agent before he starts competing for roles with Cuba Gooding Jr.

Plot: Julian Michaels (Bruce Willis) has designed the ultimate resort: VICE, where anything goes and the customers can play out their wildest fantasies with artificial inhabitants who look, think and feel like humans. When an artificial (Ambyr Childers) becomes self-aware and escapes, she finds herself caught in the crossfire between Julian’s mercenaries and a cop (Thomas Jane) who is hell-bent on shutting down Vice, and stopping the violence once and for all.

Review: Vice sees Bruce Willis reunited with Brian A Miller, director of the much maligned The Prince. Once again, Mr. Willis has a small supporting role and one wonders just how much money does he need that he keeps taking these roles. Vice is a action/sci-fi thriller that is only really missing action and thrills. It borrows ideas from other films but is unable to execute the ideas nearly as well. The resort Vice is just a skyscraper version of an amusement park (Westworld), the artificial inhabitants don’t realize they are robots (Blade Runner), and our hero cop is a grizzled yet respected rebel who doesn’t have time for the police department’s bureaucratic bullshit (almost every cop film ever made). Heck, he even walks around and delivers his lines with a matchstick in his mouth. Sadly, he is no Marion Cobretti and as much as he tries with the material he is given, he can’t help this movie beyond the B level that it is.

Clearly done on a limited budget, the interior police station scenes looks awful and the DP on this flick has some explaining to do. Bruce must have been able to do his scenes in a day or so, as he never leaves the building and to be honest he really does look bored in this. Occasionally we see a glimpse of that slight sly smile he is known and loved for, but that only lasts for a second (probably as he remembers what he is being paid), before he is forced to deliver more dialogue. Note: One explanation for his one note performance could be explained at the end of the movie, when a twist everyone saw coming is revealed.

Ambyr Childers looks fantastic and does a good job as the robot given a taste of freedom and wants more. She also does what she can with the material but the whole exercise is really mired in a lost cause. Having a good performance in this film really is like swimming against the tide. Try as you may, you eventually drown under the weight of mediocrity.

Overall, If I was Thomas Jane, I would call my agent before he starts competing for roles with Cuba Gooding Jr.