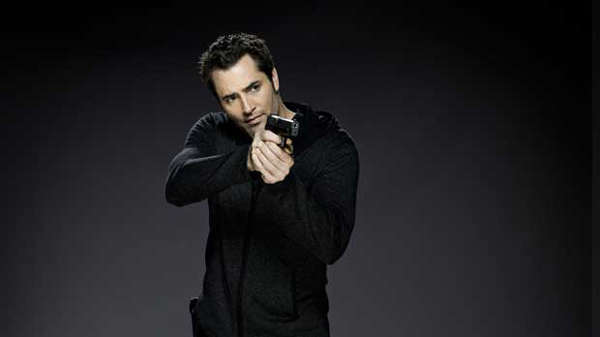 The Scorpion King 4: Quest For Power was released last week, and we thought this would be a good time to check in with the star of the film Victor Webster. We talk about the movie, his training and the final season of the popular show Continuum. He joined us from his home in LA.

So you’re starring in the new Scorpion King movie Quest for Power; making it your second appearance as Mathayus, what made you want to originally join this series?

I loved the original one with The Rock and sword and sandal movies with a bit of adventure and magic. The movies are fun, they have a great sense of humor, the action of course is one of my favorite things so any chance to step in and swing a sword, ride horses and make jokes, I am doing something that I love. It is a job but when it is really fun it doesn’t seem like work and it seemed like it would be a really great experience.

This movie had more humor than the other sequels and had a breezier, lighter tone but it feels more like the original Dwayne (The Rock) Johnson movie. Was that important to take it back to its roots?

Absolutely. You know the third film in the series, which was the first one I did, director Roel Reine wanted to make it more of a gritty action movie, so that’s how he tried to film it. Roel is a lot of fun but it was really difficult because every fight scene is a master from beginning to end and for people who do not know about the business, you might go in and do four or five moves, four or five moves, four or five moves and it’s edited together for the final scene. With Roel is it beginning to end, beginning to end, beginning to end, so he shoots the entire fight and some people got hurt and it’s really draining and tiring but it was a lot of fun as well. With that film, The Scorpion King 3: Battle for Redemption, the producers didn’t think it was funny enough so we added a lot of lines in with post production. So some scenes you would see the back of someone’s head and they would have a funny line added and it didn’t quite work because it wasn’t organic – not how it was written. With this one, the comedy was in the script and they hired some very talented comedic actors to be in the film, so you have more the formula of the first one. You have action, comedy and at least in this one for me, I made fun of myself a lot and people made fun of me, and I think that makes it more relatable.

You had a great supporting cast including Rutger Hauer, Michael Biehn,  Lou Ferrigno, Eve Torres, Don ‘The Dragon’ Wilson to name a few. Any good behind the scenes stories?

(laughs) Plenty of stories. Ellen Hollman was great, she is such a breath of fresh air. She is beautiful, she is talented and so easy to work with. Barry Bostwick of course, a lot of his career is based in comedy and he was hilarious. It was hard to keep a straight face working with him. Don ‘The Dragon’ Wilson is a friggin warrior. He got hurt pretty bad shooting one of the fight scenes and literally had a sword stabbed three inches into the bone of his leg – blood was squirting out and he just stands up and says ‘ok, let’s keep going’. He kept insisting he wanted to finish the scene and they had to force him to go to the hospital. So he did that, got it tended to and wrapped up and returned to the set to finish the fight scene. For most actors that would be enough to have them off the movie, but he has a warrior spirit. Plus the MMA fighters like Roy ‘Big Country’ Nelson, Antonio ‘Bigfoot’ Silva and Royce Gracie – who is one of my heroes and one of the reasons I started training in Jiu Jitsu to begin with –  for a lot of them this is their first movie and they had so much fun! Running around like a bunch of kids, telling stories about the fight world and to hear them say how different it was to do fight choreography and how difficult it was for them to not hit people and how draining and tiring it was, was cool to hear. Them having that respect for what we do, as much as the respect I have for what they do, it’s nice to have that sort of mutual admiration.

Do you think that is why many so wrestlers can make the transition to film, because they are used to making it look very real and pulling their punches when needed?

Yeah, it’s a very difficult thing to do. Everybody gets hit once in a while but it’s hard to get really good at action choreography to where you are doing it very very well. I see a lot of actors and fighters come in and we have to do it over and over again because they don’t know camera angles, and the choreo needs to be always changing to match. Some people just don’t get that so it takes a long time to become skilled at it.

What type of training did you need to do for the role of Mathayus? You really bulked up.

One of the hardest things and it sounds ridiculous, is the eating. Trying to get in 6,000 – 7,000 calories a day and eating very bland food. You have some spices but you have to eat really clean so you put on ‘good weight’. A lot of plain oatmeal, plain eggs, plain chicken breasts. You are eating when you are not hungry and I feel really bad saying that with all of the starvation in the world. Then of course I have to hit the gym and hit it hard. Lifting some heavy heavy weight and by the time I am done these movies, literally every joint in my body hurts. By the time we get to shooting I am curling 70lb dumbbells for reps and my wrists and elbows are aching. I am benching more than I ever had and it takes a toll on your body, not to mention you are doing the fight scenes where you are throwing yourself around, getting slammed into walls, hit to the ground, smashed in the face with wooden swords…

How long does it take you to get back to your normal ‘walking around’ weight when you are done?

I usually walk around at about 230lbs and these movies I am about 245 – 250lbs, so with the reduced food and extra cardio, I am probably back in about a month and a half to two months. It takes like five or six months to put it on and obviously way less to take it off.

Any interest in returning to The Scorpion King series for number 5?

If we had the quality of cast and script as this one and a great director like Mike Elliott… I could be convinced to do another one. It was just so much fun. Our fight choreographers Grant Powell and Nathan Barris – they brought so much to the table – incredible, imaginative fight choreography and tons of humor in that choreography. We really had a great time and it wasn’t like work, so if all of those things were in place for a fifth one and the fourth did well then yeah, I would do another one.

I think that VOD films although not as highly promoted as blockbusters, tend to find an audience that is more devoted to them as they feel they discovered it as opposed to being ‘sold’ it. Would you agree with that?

I definitely would. If you see a small ad for a movie and seek it out or find it like you said, it’s your choice and not being shoved down your throat. Maybe you have a taste for sword and sandal movies or perhaps you saw the previous Scorpion King films, and you liked it or you like the fighters or the beautiful girls in the movie, there’s something for everybody. But as far as advertising, compared to blockbusters we barely get any at all. Perhaps a short trailer in front of another Universal movie, or on Redbox, some TV and social media, so you are lucky if you see it. It’s not thrown in your face so a lot of it depends on word of mouth.

Fans were delighted to hear that Continuum is returning, but it is bitter sweet as the return also marks a shortened season and the series finale. Your thoughts…

I am really glad that we got that, it would have been a shame to go out at the end of the third season the way we did. I think the show is a five season series. The way they had it planned was to finish at the end of five full seasons and to hear some of the ideas that were thrown around about this show and how a fourth and fifth season could possibly go, were mind boggling. Such imaginative, great ideas…and it’s a bummer that we only got six episodes, but at least it’s six episodes to wrap the show up and try and do it some justice. I have a lot of faith in the writers and Simon Barry (show creator) is so smart and I think he will have a fantastic ending for the show and we will go out with a bang. I would have loved to stay on the show for years because I have such a great time working with everybody – it’s like hanging out with extended family and friends, but I am excited to tie the show up properly and give the fans the great ending that it deserves.

Do you know if the ending is left open for a possible renewal on another network or TV movie down the line?

A TV movie would be awesome. If another network picked us up for another season, that would be great but it may not make financial sense for them only because they would only own one of five seasons. I haven’t talked to Simon yet; I know we go back in March to start shooting so we will probably start having some conversations in February some time and figure things out. As far as what I have heard so far, no, but stranger things have happened…