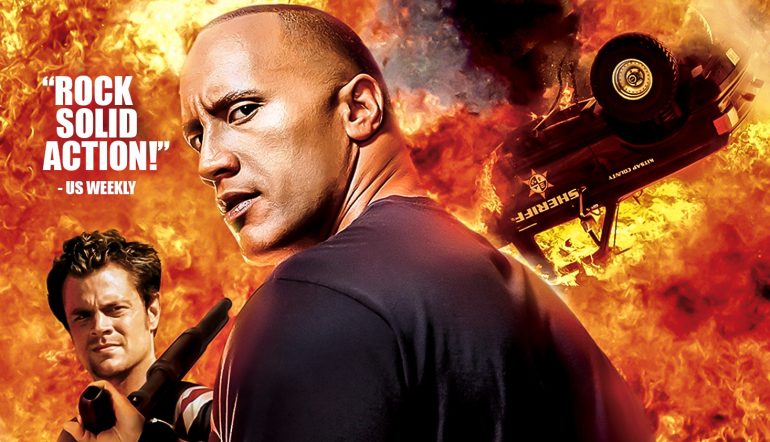 Although it feels compromised by the PG-13 rating Walking Tall is one of Dwayne Johnson’s better movies and this new Blu-ray has enough special features to be worth picking up.

Plot: A former U.S. soldier returns to his hometown to find it overrun by crime and corruption, which prompts him to clean house.

Review: A remake of the 1973 movie starring Joe Don Baker, and the follow-ups starring Bo Svenson, this version of Walking Tall stars Dwayne “The Rock” Johnson as a recently returned war veteran named Chris Vaughn. His hometown is a shadow of what it once was: A casino is the sole source of income, and drugs, prostitution, and corruption has eaten away at the once proud town. On his first day back, he goes to the casino with some friends, and over an infraction at one of the tables, he causes a ruckus, which results in him being brutally maimed and left for dead. Months in recuperation, he emerges with a bone to pick with the casino’s owner, Jay Hamilton (Neil McDonough), who tries bribing him to not go to the authorities over his troubles, but Vaughn is a straight-arrow, and his anger leads him down a path of controlled vengeance.

Armed with a two-by-four, he demolishes the casino and breaks some bones of some hired thugs, and he’s swiftly arrested and brought to trial for being a menace to society. In his trial, he sways the jury to his side by promising to clean up the town if he is elected sheriff, and so he’s declared innocent, and in due course, he wins the election and becomes the town’s new sheriff. Sporting a badge and his two-by-four, Vaughn does as promised, but it gets messy when Hamilton’s underlings retaliate.

Between this movie (directed by Kevin Bray) and the films made in the 70’s, there were a couple of good “B” action movies that told the same story. Jerry Trimble made One Man Army and Cynthia Rothrock made China O’Brien, and both of those movies were just as fun as The Rock’s Walking Tall, which bears the seal of approval as an official remake. It’s short (86 minutes with credits), and there’s very little time for much other than action and set-up, so if you’re looking for something very simple, easy to follow, and completely as advertised, then there’s no reason why it won’t make you happy. The Rock is good in it, and I like this better than his first film The Rundown, but it still feels compromised by a PG-13 rating. Co-starring Johnny Knoxville as one of the hero’s buddies. Knoxville played a strikingly similar character in The Last Stand, starring Arnold Schwarzenegger. Two direct-to-video sequels / follow-ups called Walking Tall: The Payback and Walking Tall: Lone Justice starring Kevin Sorbo came in 2007.

MVD Rewind Marquee has just released a nice Blu-ray package for this title. The packaging is much more attractive than the previous MGM release, and the special features (commentaries, bloopers, deleted scenes, etc.) are imported over. If you missed this title on Blu-ray the first time, now’s the right time to pick up this new release.