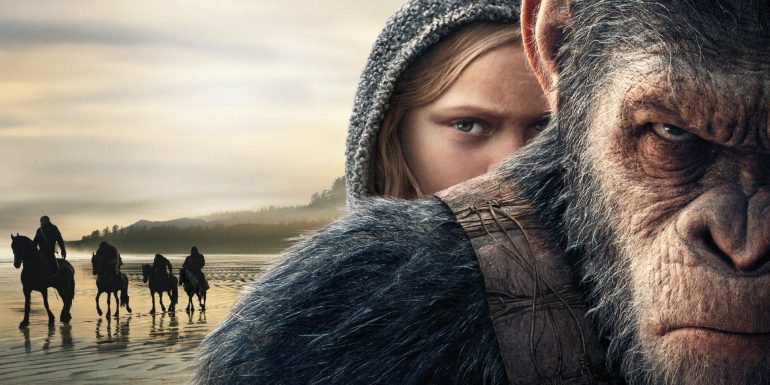 With hints of Goldsmith and Barry the War for the Planet of the Apes music score is a must-have.

Review: Years have passed since ape Caesar (Andy Serkis) established himself as the leader of the apes after most of humanity succumbed to “the simian flu,” and now he’s at war with a new human faction, led by the ruthless Colonel (Woody Harrelson) and his small army. Those who once followed Koba, Caesar’s turncoat general, have now joined the humans as “donkeys,” those who would rather serve man as traitors than return to fight with Caesar. But there’s a new threat to mankind: the simian flu has mutated and is turning humankind into silents, mute people without the ability to speak.

The Colonel is killing off his own men if they exhibit the symptoms of the new strain of the disease, and he’s being opposed by a whole other human army that is coming for him. In a stroke of good luck for him, his army captures Caesar’s entire clan, but Caesar – who is more interested in revenge after the Colonel murdered his wife and son – goes rogue with several other of his most trusted soldiers, which sets a new course of events as they try to rescue the captured apes and escape before the two human armies go to war with each other with the apes in the middle.

A slow burn science fiction apocalypse film with jaw dropping special effects, War for the Planet of the Apes is pretty on par with the previous entry Dawn, but it still isn’t the game changer the way Rise was. One of the winning aspects of the film is the score by Michael Giacchino, who also scored Dawn of the Planet of the Apes, as well as Cloverfield and Let Me In, all of which were directed by Matt Reeves. Reeves and Giacchino make a good team, and if you’ve been paying attention to Giacchino, he has quickly become perhaps the biggest and best composer of his generation. He’s one of the few composers still composing scores in the classic style with themes and a lyrical point of view. In his score to War For the Planet of the Apes, I hear echoes of Jerry Goldsmith (composer of the original film), as well as John Barry, which is very interesting. Giacchino has yet to emerge with his own sound, but he truly does know how to emulate great composers that came before him. He does excellent scores, as evidenced by Super 8, John Carter, and Doctor Strange, just to name a few.