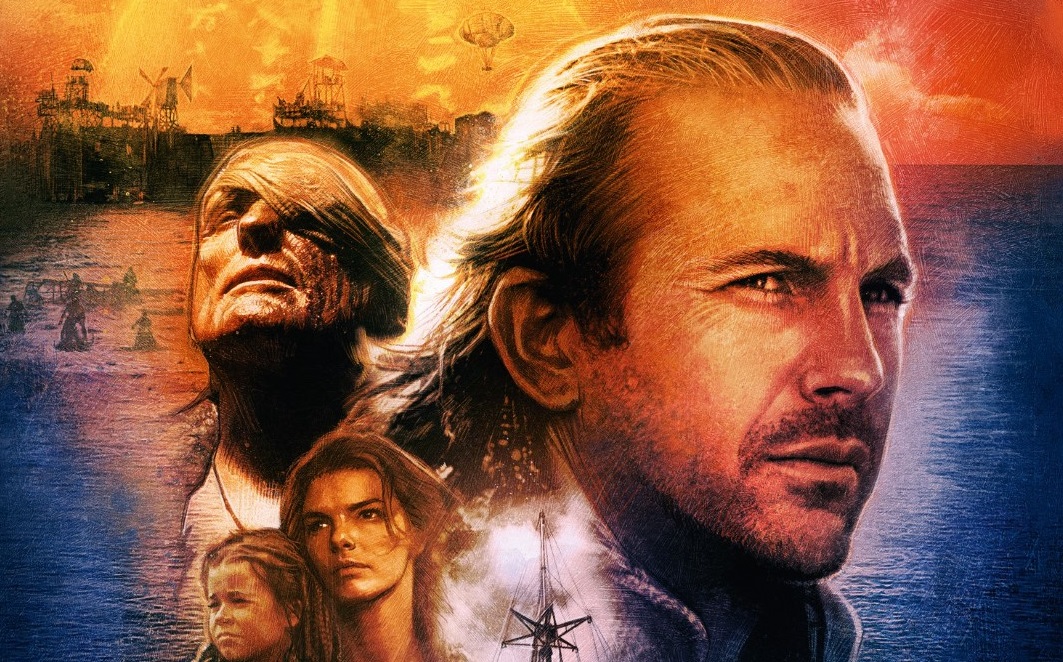 Much derided at the time of release Waterworld has plenty to recommend it and this new Blu-ray with three alternate cuts is the most definitive version you’ll see of it. A must have.

Plot: In a future where the polar ice-caps have melted and Earth is almost entirely submerged, a mutated mariner fights starvation and outlaw “smokers,” and reluctantly helps a woman and a young girl try to find dry land.

Review: Waterworld is one of the most derided movies in cinema history and is one of the best post-apocalypse movies ever made.  It’s basically The Road Warrior and Mad Max Beyond Thunderdome on water, and it’s just as good as those.  Hundreds of years into the future the polar ice caps have melted and flooded the earth.  Surviving humans have adapted and have become atoll-dwelling beings who trade scraps and value dirt and paper as much as they covet drinkable water.  The first time we see the hero, The Mariner (Kevin Costner, in a very physical role), he drinks his own filtered piss water.  He roams (much like Mad Max) without direction or purpose other than self-preservation.  His means of transportation is a giant catamaran with all the trappings a hero needs to escape any danger.  When he goes to a floating city to trade some dirt, he meets Helen (Jeanne Tripplehorn) and a “prodigal child” named Enola (Tina Majorino), who has a cryptic tattoo on her back which some say points the way to Dryland.  It is revealed that The Mariner is a mutant (he has gills and can breathe in the water), and so he is tried as a freak of nature and sentenced to death.  At this juncture, the city (which has the requisite roles for various peace-dwelling survivors) becomes a war zone when the Smokers, a marauding gang of jet-ski warriors who have a never ending supply of cigarettes, attack and try to kidnap the tattooed girl.  The Mariner saves Helen and Enola, igniting a chase which lasts the rest of the movie.  The Smokers are led by the Deacon of the Deez (a gleefully enjoyable Dennis Hopper), whose base is the Exxon Valdez, which has a diminishing supply of “the black stuff”.   Dryland is eventually found and The Mariner (who grows to love the little girl) sails off back into the ocean by himself – just like Max did at the end of each installment of the Mad Max series.

All fairness aside, this is a triumph of stunt and camera work.  The cinematography is by Dean Semler, who also worked on The Road Warrior and Thunderdome.  The set design and costumes are outstanding. The score by James Newton Howard is thrilling. The mere idea of this movie is awesome and original.  No other movie has the same setting or story.  If the world were to be destroyed by floods, then this is probably how it would look like hundreds of years down the line.  Even the language in the movie is altered (several of the characters speak “Portu-Greek”).  The script is by Peter Rader and David Twohy (Pitch Black).  Kevin Reynolds, the director, deserves a lot of credit for undertaking this epic, and if rumors are correct, then he walked off the project towards the end and was replaced by Costner.  Reynolds is one of the best directors for big epics (he did Robin Hood: Prince of Thieves, The Count of Monte Cristo, and Tristan and Isolde), and as far as scale and scope, Waterworld is probably his biggest and best film.

Arrow’s brand new three-disc deluxe edition of Waterworld comes with three different versions: The theatrical version (135 minutes), the TV Cut (176 minutes), and the “Ulysses” Cut (178 minutes). All three versions are in high definition. Disc one contains a newly produced, feature-length documentary on the making of this film, as well as a wealth of bonus material, including trailers, stills, and archival featurettes. Included in the hard case slipcover is a booklet with a collection of essays by david j. moore, Daniel Griffith, and archival articles. Paul Shipper was commissioned to create new artwork for the cover, and as a bonus there are six collectible lobby card reproductions in the case as well. Never will there be a more devoted release for this film, and anyone who’s ever waited to own the definitive edition of Waterworld now has their chance to scoop this treasure up.