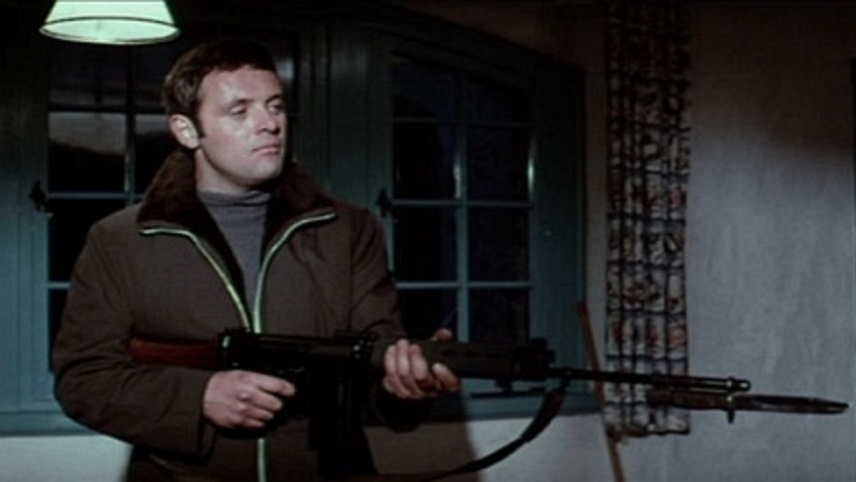 The movie is worth watching for some nice fisticuff action scenes with Hopkins, nice scenery of Ireland and Scotland, and a slam-bang shootout at the villain’s compound at the conclusion.

Synopsis: In a vein similar to Bond movies, a British agent Philip Calvert is on a mission to determine the whereabouts of a ship that disappeared near the coast of Scotland.

Review: Secret agent Stalwart Philip Calvert (Anthony Hopkins looking svelte and athletic) is on the trail of a bunch of high seas pirates who’ve stolen a stash of gold bricks off the coast of Scotland. His superiors at intelligence in London aren’t much help to him as he breaks every rule in their stuffy books, and the agents they’ve assigned to assist him are slain in the field. The villains are typically obscenely wealthy and have outrageously gorgeous women at their sides, but Calvert can trust no one as he kicks, socks, shoots crossbows, and dangles from helicopters while trying to get to the bottom of the dastardly pirates’ nefarious plot and locate their hideout.

A splashy 007-key artwork on the poster of When Eight Bells Toll really evokes the spirit of James Bond, but as per usual for many of the riffs on the Bond films, this motion picture can’t touch those movies because it simply doesn’t have the story or the pizazz of the EON productions that produced the Bond movies. Hopkins wasn’t given strong material to work with here, so his performance is only as good as his flat role allows him to be, and there is never a show stopping set piece to center the film around. Every time Hopkins gets inside a helicopter, the music score goes into overdrive, as if seeing an agent sitting in a chopper is a big moment. Still, the movie is worth watching for some nice fisticuff action scenes with Hopkins, nice scenery of Ireland and Scotland, and a slam-bang shootout at the villain’s compound at the conclusion. Prolific espionage novelist Alistair MacLean wrote the script and Etienne Perier directed.

Kino Lorber’s Blu-ray is comprised of a brand new 2K HD restoration, so the transfer is excellent, and while there aren’t any special supplemental features on the disc, the movie is a solid addition to anyone’s spy movie collection.