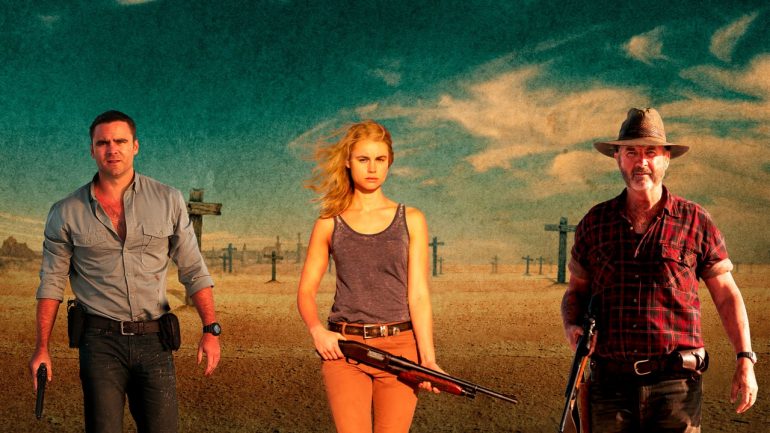 Newcomers to the Wolf Creek franchise need not worry: They’ll be able to enjoy this action thriller series too.

Synopsis: Eve, a 19-year-old American tourist is targeted by crazed serial killer Mick Taylor. She survives his attack and embarks on a mission of revenge.

Review: Full disclosure: When I saw the original Wolf Creek in a theater in 2005 I recoiled from in it in every sense of the term. I absolutely despised it with every fiber of my being. The film – purportedly based on local Outback legends of the mass disappearances of tourists and locals over a period of decades – really dug its heels into the torture porn subgenre of horror films and its central psycho killer – a giggling, merciless hillbilly named Mick Taylor (indelibly played by John Jarratt) – was worse than Jason and Freddy Krueger combined simply because he was human and indiscriminately killed men, women, and children and gleefully enjoyed the process of doing so. When the sequel came around in 2013, I avoided it, but the franchise spawned an unlikely extension in the form of a premium TV series (6 episodes total) on POP, which made me curious. One of the main reasons why I hated Wolf Creek so much is because the film was so intensely focused on Mick’s calculated killing methods of his helpless prey, and literally having zero payoff at the end. It was extremely difficult for me to have an emotional connection to the film other than fear and loathing. Which brings me to the surprising TV series, which just aired last month on POP.

The first episode sets the whole premise up: Mick wanders into a remote campsite with some American tourists. In shocking fashion, he slaughters the family in one fell swoop. He kills the father (a cop), the mom, and a little boy, but he somehow misses the daughter, a 19-year old teenager named Eve (Lucy Fry), who escapes. Annoyed at his mistake, Mick spends the next few weeks wandering around the nearby towns, searching for clues as to what became of the girl. All he knows abut her is that she’s blonde. In the meanwhile, Eve doesn’t take time to lament her unfathomable loss. She goes to a police station, tells a detective what she saw, offering a description of her family’s murderer, and the detective – Sullivan (Dustin Clare) – realizes that this might very well be the man responsible for a string of unsolved murders and disappearances all throughout the outback for years on end. He agrees to help Eve, but not wanting to be tied down to a system that could very well fail her, Eve goes out on her own and hunts Mick, using every bit of her fortitude and ingenuity that she’s able to muster. Over the course of months she changes her appearance, gets herself into terrible danger with other unsavory characters that try to rape her or kill her, and she even takes a sojourn with an Aborigine who teaches her how to use traditional tribal weapons. By the time the final episode comes around, setting up the inevitable confrontation between the hunter and the hunted (or vice versa), my nerves were shattered, hoping that my investment of time was well spent. I’m here to tell you that it was. Thank goodness.

Fans of the original Wolf Creek (and I find it hard to believe that there are, frankly) will enjoy this TV series as it has all the grisly, chilling violence of that film, but this time there’s a payoff, and not just in the satisfying conclusion, but in that we as the audience get to delve into the minds of the collateral victims that Mick has affected over the years, including Eve. The Outback is full of hopeless and depressed families that Mick has touched with his evil hand. Mick himself is fleshed out a little bit more this time around, as we get a backstory of what made him the way he is (which actually helps me to understand his awful behavior), although he’s never the center of the show’s attention, which I also appreciate. By the final episode I was willing to admit that I was enjoying the story, but it took awhile for me to commit myself emotionally to what I thought was going to be another foray into torture porn hell. There’s payoff at the end, and newcomers to the Wolf Creek franchise need not worry: They’ll be able to enjoy this action thriller series too.

A STAN original, WOLF CREEK is produced by Screentime (a Banijay Group company), in association with Emu Creek Pictures and financed with the assistance of Screen Australia and the South Australian Film Corporation.

Fans don’t sit at the outskirts of pop culture making snarky comments. They live right smack in the middle of it, sharing, creating, and connecting their passions with others. At Pop, fans finally have a destination that celebrates the fun of being a fan. Fans aren’t even fans anymore — they’re gladiators, tributes, human beings and blockheads. Seen in more than 80 million homes, Pop gives fans a dedicated channel that loves being a fan as much as they do. A channel that respects talent over celebrity. A channel filled with optimism, passion, humor, and excitement. A channel that understands the fun doesn’t stop when the credits roll… it’s really just the beginning.

Pop is a joint venture of CBS Corporation (NYSE: CBS.A and CBS) and Lionsgate (NYSE: LGF). The partnership combines CBS’s programming, production and marketing assets with Lionsgate’s resources in motion pictures, 8television and digitally delivered content. Pop’s ownership structure is comprised of the company with the #1 broadcast network and many of the top first-run syndication series (“Entertainment Tonight,” “The Insider”) and the studio that produces and distributes the blockbuster “Hunger Games,” “Twilight” and “Divergent” franchises and produces such award-winning TV series as “Mad Men” and “Orange is the New Black.”