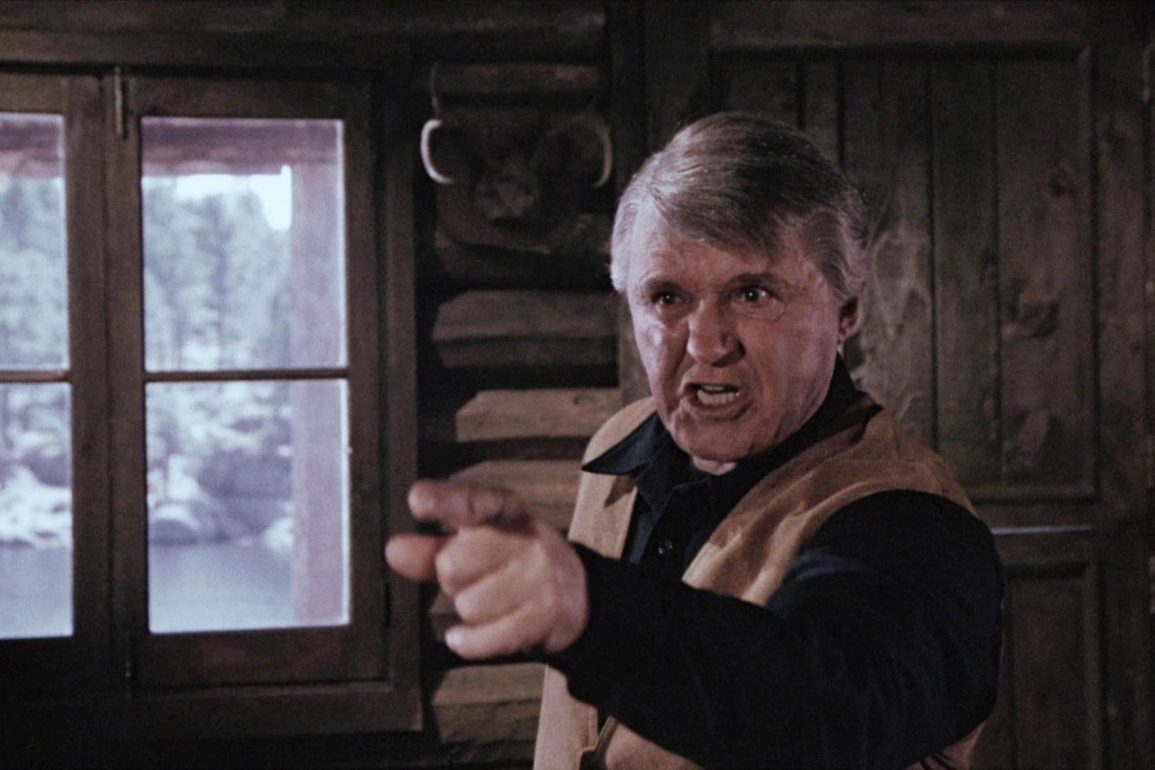 The performances in Wolf Lake are solid, particularly by Steiger and Huffman, and there’s plenty of action in it, but it’s not “fun,” per se.

Synopsis: War veterans visit a lakeside cabin for a week of hunting and drinking, but find the cabin being looked after by a young caretaker named David. When David’s status as a war deserter is revealed, all hell breaks loose.

Review: A few years before Sylvester Stallone played John Rambo in the cathartic actioner First Blood, Wolf Lake tried to tackle a similar subject matter, but instead of giving audiences an adrenaline-charged adventure film that more or less gave Vietnam veterans a chance to win the war, the film opened up fresh wounds and put audiences through the wringer. Watching Wolf Lake now is still a very brutal experience, but it’s worth a look.

Four World War II vets – Charlie (Rod Steiger, super intense and unwavering), Wilbur (Jerry Hardin), Sweeney (Paul Mantee), and George (Richard Herd) fly into a remote wilderness area where they visit every year for some rest and relaxation. As soon as they arrive, they find that things are different. The usual guy they depend on as a guide is no longer there, but has been replaced by a serious young man named David (David Huffman) and his girlfriend (Robin Mattson), which doesn’t sit well with Charlie, who immediately clashes with David. They soon find out that David was a deserter in Vietnam, and because Charlie’s son was killed in Vietnam, this knowledge sends Charlie into an unmanageable rage. He forces his friends to rape David’s girlfriend, and David strikes back and kills one of Charlie’s buddies, propelling a fight or die hunt where Charlie and his two skittish friends hunt David in the woods. In a last stand, David fights back with everything he’s got, leading to a devastating conclusion that literally started fights amongst patrons when this film was tested in theaters in 1980.

From writer / director Burt Kennedy, Wolf Lake is a no-nonsense revenge tale that might have been slightly ahead of its time. On the Kino Lorber Blu-ray, producer Lance Hool discusses the making of the film, and that the film was virtually shelved after disastrous test screenings, and it took a few more years (with the release of First Blood) for him to realize that America needed escapism more than something like Wolf Lake, which portrayed Americans fighting amongst themselves to a devastating degree. As a result, Hool would end up writing Missing in Action for Chuck Norris, and the rest is history. So, in retrospect, if there hadn’t been Wolf Lake, there wouldn’t be Missing in Action. The performances in Wolf Lake are solid, particularly by Steiger and Huffman, and there’s plenty of action in it, but it’s not “fun,” per se. Fans of Vietnam dramas and action films should make it a priority, however. Kino’s Blu-ray also includes on-camera interviews with several of the actors from the film. It’s available now.