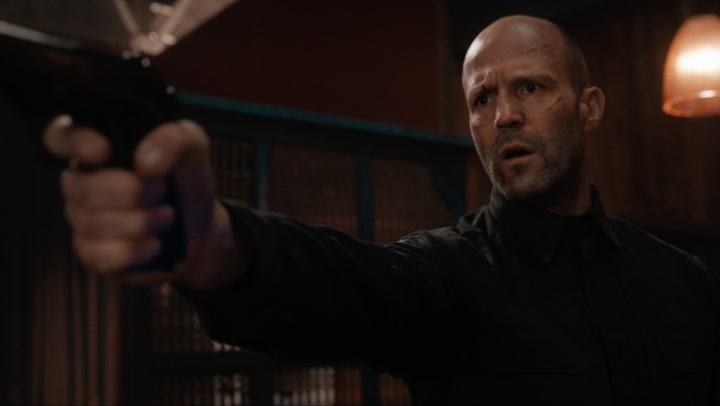 Wrath of Man is a cold, bone-crunching, unforgiving actioner that pulls none of its punches making for a brutally entertaining movie.

Plot: Mysterious and wild-eyed, a new security guard for a cash truck surprises his co-workers when he unleashes precision skills during a heist. The crew is left wondering who he is and where he came from. Soon, the marksman’s ultimate motive becomes clear as he takes dramatic and irrevocable steps to settle a score.

Review: Wrath of Man (WOM from here on in), is Guy Ritchie’s first foray into serious, balls-to-the-wall action cinema. He’s flirted with this genre before in a couple of his other gangster-comedy efforts, but unlike those films, WOM is a straight-up grim crime thriller that doesn’t take prisoners. No levity. No laughs. No whacky characters with personality ticks.  Everything is bleak and the tone is less fun than a visit to the viewing of a recently deceased loved one.

I won’t spoil the plot, or its twists, since there are quite a few, so I’ll keep the plot breakdown slim. Statham (heading into stoic Charles Bronson territory with this performance), plays Patrick Hill, a shadowy loner who has just got a job working for Fortico – an armoured car business. While the other guards in the cash trucks seem fearful that they will be robbed one day, H, as he is known, seems eager for the action. After H bloodily thwarts a robbery attempt, it becomes clear that he is no ordinary guy…  and that he has something else other than transporting money on his mind.

What unfolds is a cold, bone-crunching, unforgiving actioner that pulls none of its punches and isn’t afraid to paint its characters in shades of grey. No one is innocent in this flick. Everyone is guilty of something, and those responsible for pissing off H will pay dearly for their indiscretions.

Ritchie and Statham have been friends for a long time, and the prospect of making such a dark thriller must have appealed to them after collaborating on a couple of crime-comedies. Ritchie shoots the film with 70’s sensibilities – the camera movement is minimal, the dialog is sparse but sharp, and the actions scenes are more interested in the audience feeling the blows than showing explicit blood.  Maybe, just maybe, because he’s European, Ritchie shoots Los Angeles in a way that seems fresh, and real, free of movie clichés.

Statham has never been more chillingly effective in a film than here.  His character H is a driven man, who will go to any lengths to achieve his goal, and Statham perfectly captures this, and the whole film hinges on his understated, tough performance.  Make no mistake, H isn’t a good dude, and Statham plays him like a distant, angry cousin of Mel Gibson’s Porter from Payback.  Well done! Statham has major talent backing him up in Jeffrey Donovan, Hunt McCanally, Ritchie fave Eddie Marsan, Scott Eastwood (playing the ultimate scumbag) Andy Garcia and Josh Hartnett, who is excellent in a role that caught me by surprise.

Composer Chris Bensted’s score is like an angry, ravenous beast (much like H) that pushes its ugly head into the film during the pics nastier moments, in other words, it’s perfect for this film. And at 118 minutes, the movie totally flew by, especially during the protracted closing 20 minute gunfight. The cinematography, while on the dark side, totally suits the bleak nature of this modern day noir piece.

Much like 2018’s Dragged Across Concrete, WOM is a deathly serious crime caper that begs for repeat viewings. If you go in expecting something light-hearted like The Gentlemen, you will be disappointed. If you’re expecting to enter a dark world of tough-talking anti-heroes, you’ve come to the right film.   Brutally entertaining.