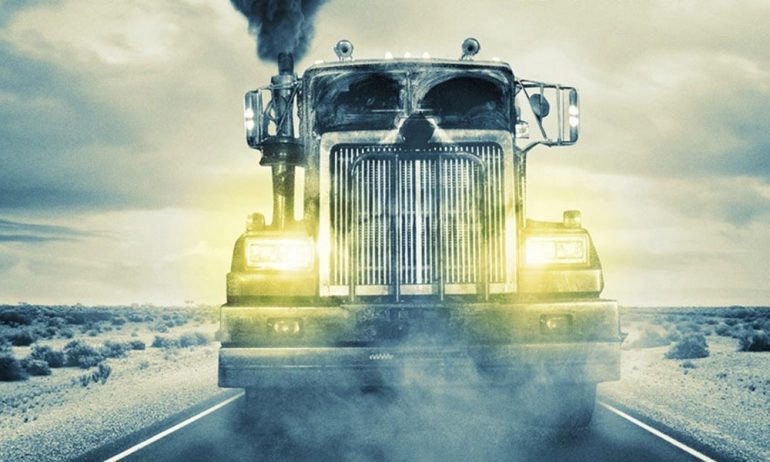 Wrecker is mercifully short at 83 minutes, but when all you’ve got is what this movie gives you, you ain’t left with much.

Plot: Best friends Emily and Lesley go on a road trip to the desert. When Emily decides to get off the highway and take a “short cut,” they become the target of a relentless and psychotic trucker who forces them to play a deadly game of cat and mouse.

Review: Wrecker goes exactly the way you think it will: An ugly old truck driven by a never seen psycho killer terrorizes two pretty women in a red sports car in the middle of a deserted highway. There are stops in between terror sessions where the two poor girls (played by Anna Hutchinson and Drea Whitburn) panic, stop at a diner, get pulled over by a confused cop, and end up accusing the wrong trucker for chasing them, but haven’t we seen this movie before, but much better?

Steven Spielberg’s made-for-television Duel is a masterwork of suspense, psychological horror, and thrills, culminating in an entirely satisfying conclusion that has the behemoth of a truck meeting its end, but the writer and director of Wrecker (that would be Michael Bafaro) didn’t study Duel well enough, even though he certainly rips it off plenty.

The first rule (at least for me) that makes a good thriller/horror movie is to have characters that you care what happens to. The two protagonists of Wrecker are fairly vile trash talkers who have no beginning or end. All we see is their predicament and the ugly things they talk about. They say “fuck” a lot, and they act real scared. They have no resolve, no pluck, no real interesting things to say or react to.

The truck is after them for no reason, and they react (or overreact), but to what end? When we see the truck’s inevitable demise, we see a quick CGI crash that wouldn’t satisfy a dog watching the T.V. If you’re not even going to crash a truck properly to give your movie a satisfying conclusion, then why even bother in the first place? The film is mercifully short at 83 minutes, but when all you’ve got is what this movie gives you, you ain’t left with much.