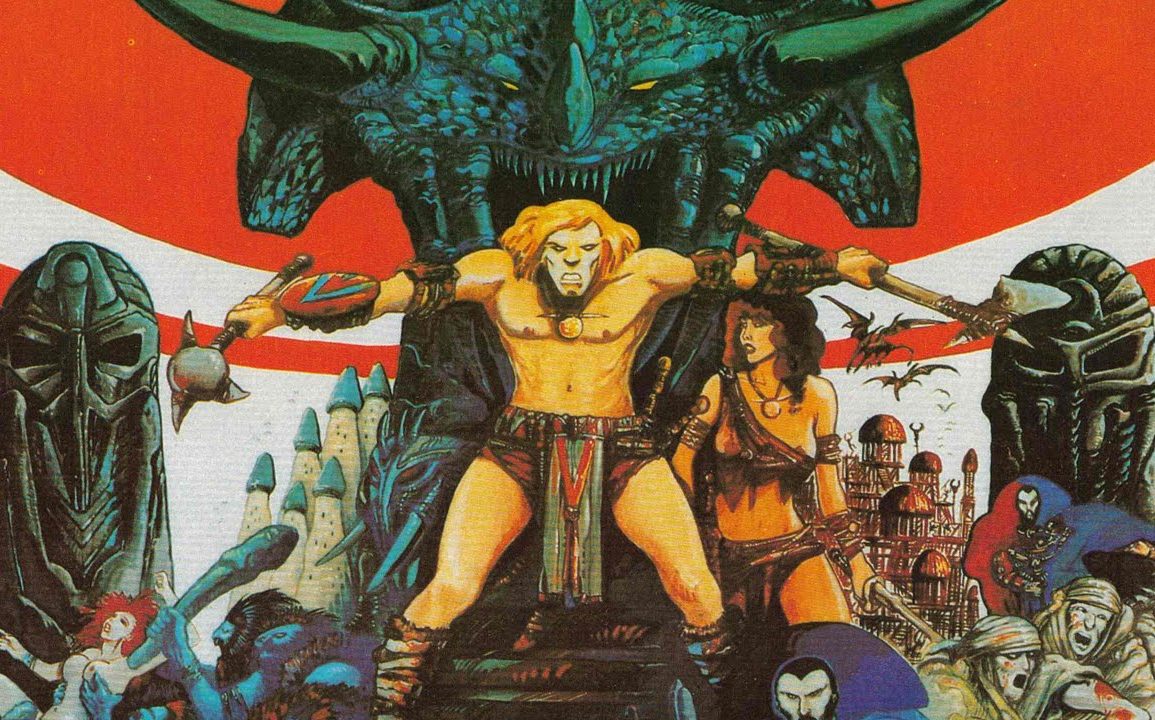 Plot: Caveman hunter Yor (Reb Brown, who played Captain America in two 1979 TV movies) traverses a prehistoric landscape, fighting dinosaurs and hostile cavemen in search of his origins. Yor stumbles upon a camp of friendly cavemen and befriends beautiful Ka-Laa (Corinne Clery) and old mentor Pag (Alan Collins) who aid him on his quest which leads them to the mysterious Overlord (John Steiner) who employs super-science in his bid to conquer the planet. Do I really have to tell you what the big reveal about Yor’s planet is?

Wait, what’s the deal here?: Yor is based on the Argentine comic Yor, The Hunter by Juan Zanotto and Ray Collins, a wonderful concoction of barbarians, monsters and science fiction. In 1983, Italian director Antonio Margheriti committed a four-part television series to the screen based on the comic. Each episode was an hour long. The show was then edited down to 98 minutes for American theatrical release and distributed by RCA Columbia to moderate success. This theatrical version obviously cut down half the content of the television series, but this version is what most B-movie buffs know of when they think of Yor. As of this writing, the television series has been unavailable outside its native Italy, and even then it resurfaces only occasionally in late, late, late night airings if at all.

Review: Yor, The Hunter From the Future is ludicrously fun. Let’s start with the amazing theme song by the De Angelis brothers. Once you hear it, you won’t be able to get it out of your head for a week. You’ll be singing “Yor’s world/he’s the man!” over and over. What’s great too about this song is its limited use in the movie, played during the opening credits and in two heroic moments in the film, just enough exposure to be effective and not unwelcome.

Reb Brown looks a little scrawny to be portraying a half-naked barbarian and sports a rather insipid voice for a supposedly tough, brawny hero, but the script creates such a wonderful heroic character in Yor that Reb grows on you as the film progresses. Corinne  Clery is hot as Yor’s leading lady and there’s a great cat fight between her and another woman competing for Yor’s affections. Note that the actors on the poster for this movie are clearly not Reb Brown and Corinne Clery.

The special effects are serviceable for the early 80’s. The dinosaurs are practical constructs with several moving parts that are well animated for their time. In the pre-CGI era of dinosaur animation, these dinosaurs looked pretty good in their day and are able to interact well with the human actors, gushing blood when poked with spears and arrows. They still look like puppets though. Probably the most awesome moment in the movie has Yor staking out a bad guy encampment where Ka-Laa is being held prisoner. Unable to come up with a decent plan to storm into the camp and save his lover, Yor kills an attacking Pterodactyl. What does Yor do next? He uses the Pterodactyl’s stiffened corpse to hang-glide in and rescue Ka-Laa – to the tune of “Yor’s world/he’s the man!”. It’s a moment so amazing that it transcends the movie’s cheap look and feel to ascend to giddy movie awesomeness.

There are some cheesy giggle-inducing moments, like Yor’s conquering war cry after killing a Stegosaurus with his bare-hands and a moment where Yor gets really pissed off at a radio, shouting “DAMN TALKING BOX!!!” but these moments make the film all the more fun. And the gore and violence more than make up for all of this, especially Yor’s gruesome dispatching of a bunch of hostile lepers in one scene, burning and shish-kebabing the whole lot with a fiery sword.

The villainous Overlord is sort of a Doctor Doom rip-off and his hand-flashlight weapon that he breaks out in one fight is pretty funny. His robot army looks awesome, the fighting faction looking a little Darth Vader-ish in design. Overlord’s plan is to use Yor and Ka-Laa’s genetic material to create a new flawless race in the form of a cybernetic species. The cybernetic species looks pretty cool, with a sort of cone-collar thing sprouting up from their torso. While all of this may be inspired from the comic’s designs, the movie versions look cool.

Yor, The Hunter From the Future is much maligned among movie lovers, but it doesn’t deserve any hate. It’s pure action-adventure fun with cavemen fighting dinosaurs, robots and other cavemen. There’s a solid anything-goes action adventure feel to the proceedings and it’s never dull. If you like your action fantasies to include everything and the kitchen sink, Yor, The Hunter From The Future should fill that bill.