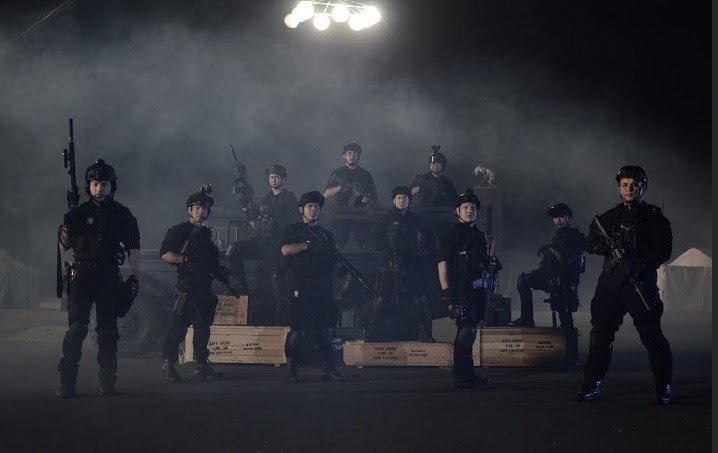 Zeta isn’t ground breaking, mind blowing or anything new in zombie flicks, but it has a few things going for it as a first attempt from a director.

Plot: Deon (Jeff Smith) witnesses a strange incident when a friend he beats suddenly bites the nurse’s neck and becomes a cannibal. After that, the attacks from the zombies happen quickly at school and on the streets, so Deon picks up his mother, Isma (Cut Mini), in Teratai Asri apartment. Deon and his mother are trapped inside the apartment while other residents has fled. Meanwhile at the Five Military Base, Colonel Vito (Joshua Pandelaki) welcomes Richard (Willem Bevers}, Deon’s father, a scientist, who discovered the origin of the outbreak: originating from the evolution of an amoeba parasite named Naegleria-ross zeta, and that the Zeta serum he had created located in Teratai Asri apartment. Colonel Vito decides that their team visit a zombie killer gang called Blue River to get the best combat strategy against the zombies. Deon also tries to fight the zombies who attack the apartment.

Review: A teenager visits his mother, while the cinematic world of zombies and brains are visited once again in Zeta: When The Dead Awaken, an Indonesian horror offering from Amanda Iswan (her first) and Swan Studios. Troublesome teen malcontent Deon (Jeff Smith) gets into a fight and sends his opponent to the school nurse, where said opponent turns zombie on her and soon anybody within reach. Deon makes his way to his mother (Cut Mini) who is suffering from Alzheimer’s, and they find themselves fighting for their lives in her apartment complex, while Deon’s father, a prominent scientist (Willem Bevers) aligns with military forces to strategize and contain the Zeta outbreak that he himself has worked on since its discovery. Can Deon and his mother escape? Can his father reunite with them while simultaneously spearheading a containment operation?

Like a lunch buffet that advertises “all you can eat” but cuts off an overweight, tank top wearing customer after their third helping of possibly rancid shrimp, Zeta is the kind of movie that meets expectations halfway. It establishes relationships and sets the appropriate mood and tone, with dark and eerie hallways, cannibalistic creatures and hard humans, mostly in ways an average cannibalistic corpse cinema connoisseur has already seen countless times.

But there’s so much promise in the more original symbolic roles and subplots that just do not get a proper payoff, with several of them either forgotten or abandoned somewhere in editing or the writer’s table, making many of the consequences rather “de-fanged” and dull, with a rather mediocre horror soundtrack. Some of these plot elements are also tied to certain special effects, both shown (briefly) and mentioned to the audience, but primarily the former in a rather boring obligatory “briefing room” scene chock full of expository dialogue amidst a plodding pace. At least the acting is decent throughout.

Speaking of effects, this film’s greatest shortcomings can be seen in the choreography and camera work: every zombie attack, every shooting via military grade weaponry, every instance of action comes off as extraordinarily delicate without intent. Zombies downed with CGI muzzle flashes and squibs fall gently to the floor instead of dropping. Eyes glow to reinforce a plot point and then stop glowing. Every grapple and bite looks like something out of a stage play rather than a feature film. In fact, this is among the least dynamic a horror film can get without being listed as a psychological thriller.

Zeta isn’t ground breaking, mind blowing or anything new in zombie flicks, but it has a few things going for it as a first attempt from a director. A plain burger from a fast food joint might not taste amazing or look all that great, but it’s sorta like food, and it’s there. Zeta is much the same: it sorta looks like a decent horror film, and it’s got zombies. It could have been a lot more than it is, but a horror fanatic can do a lot worse.

Written and directed by Amanda Iswan.