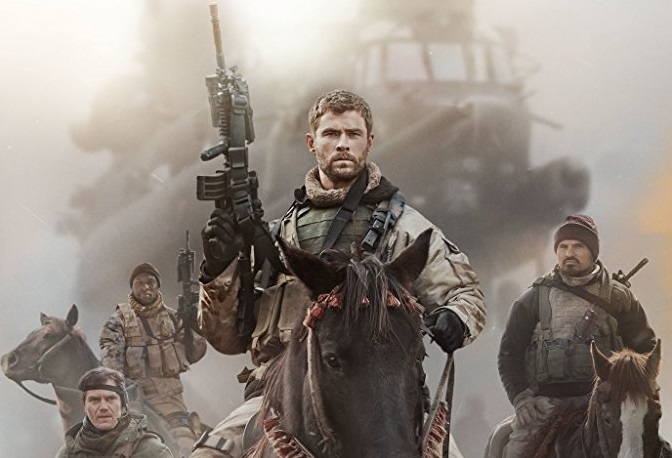 12 Strong has some stunning aerial photography and it’s nice to see Chris Hemsworth tackle something a little different. Definitely worth a watch as it’s a pretty amazing true story.

Plot: The True Story of the Army’s Special Forces “Green Berets”, who within weeks responded to the 9-11 attack. Green Berets, with the help of the 160th SOAR(A), took over the country and allowed other Special Forces and the rest of the conventional military to begin the more publicly visible war.

Review: *Minor Spoilers Ahead* I missed this when it was in theatres but it was one of my in-flight movies the other day so I thought I would finally check it out; it’s nice to see Chris Hemsworth in something other than a Marvel flick and despite the odd slip in his accent he does a decent job in 12 Strong. It’s also good to see Michael Shannon play a total hero for once rather than a villain (or weirdo) even if he doesn’t get all that much to do.

As we all know 12 Strong is based on the amazing true story of a group of green berets who take on the Taliban (on horseback) after 9/11. There are some rousing action sequences however, the fact that is is based on the true story means there are few surprises and the ending is a little flat.

It’s essentially a men on a mission movie and despite not being particularly harrowing it still manages to be patriotic without ever going over the top. True tales of heroism are always enjoyable to watch and with Jerry Bruckheimer producing then we know the action will be done well. It takes a little while for anything to happen but it’s all building up the story and developing characters so we get to know and care what happens to them.

The aerial photography is stunning with some great battle scenes and the bombing sequences are visceral and exceptionally well done with minimal noticeable CG. The fact that the men were on horseback was a feat in itself making this real life story even more incredible.

Overall, there’s not much else to say; you could do a lot worse than watch 12 Strong on a Saturday night (or Sunday if you’re feeling crazy) as it’s a thrilling true story with some spectacular action sequences, even if it does take a little while to get going.